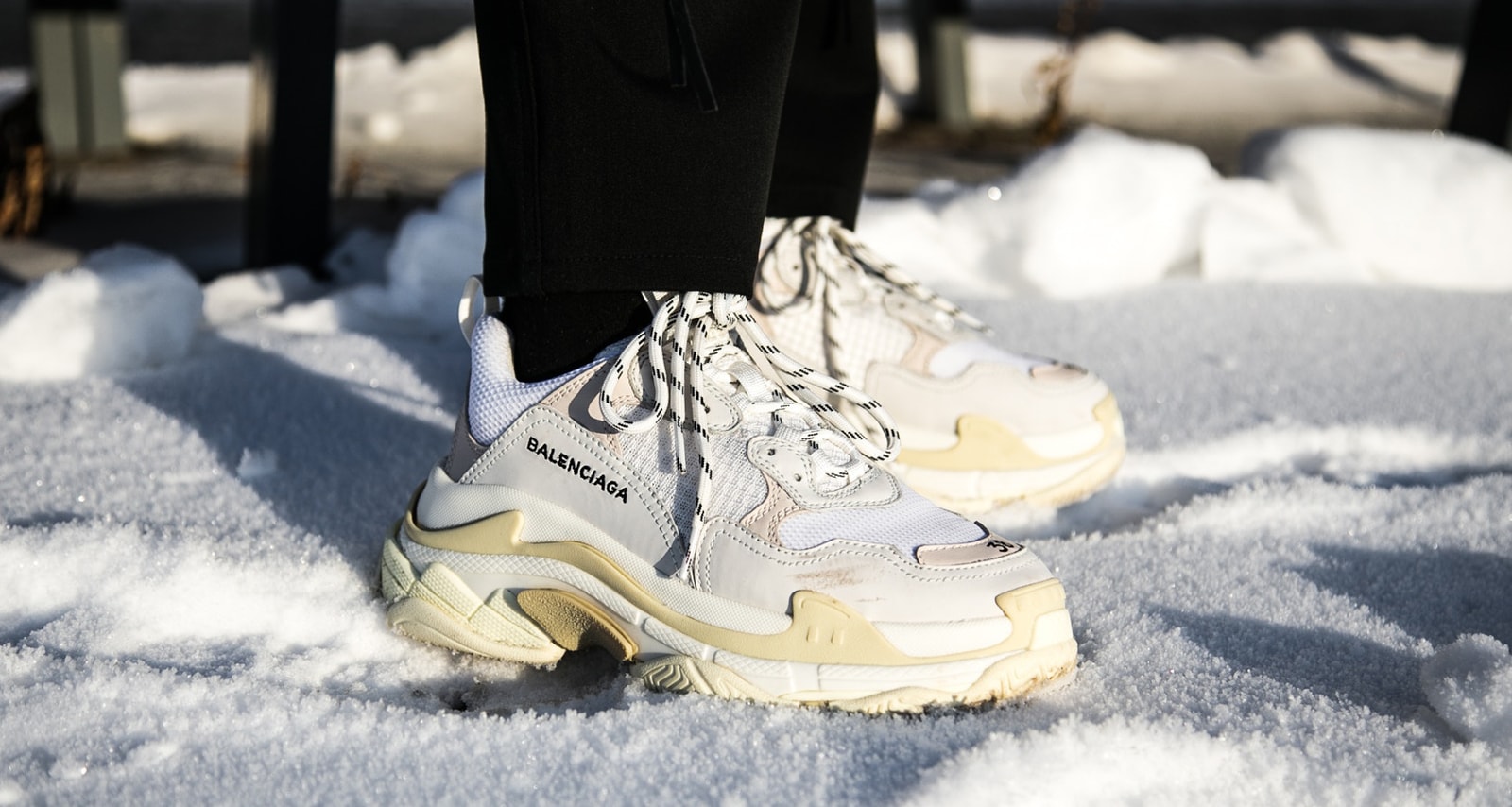 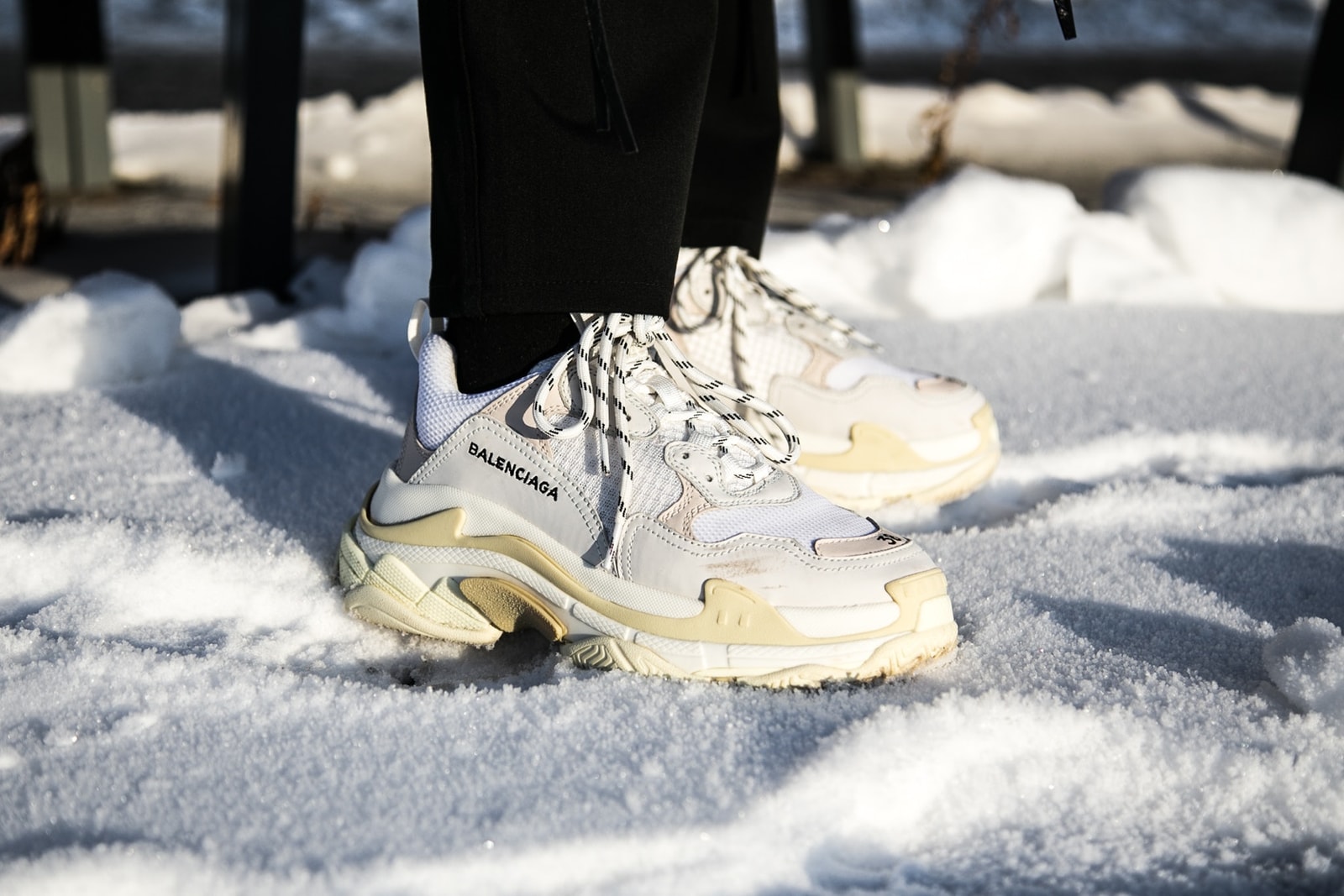 Will Chunky Sneakers Still Be a Thing in 2018?
Top buyers from the world’s biggest stores weigh in.
By Nico Amarca

Remember when sleek, minimal footwear was the primo choice among sneaker fanatics? The memory of that era may be a bit fuzzy, considering big, bold and ugly are what define sneaker culture right now. Sure, the trend isn’t necessary a new thing – Nike, adidas and New Balance have been churning out dadcore wonders for years – but 2017 marked a pinnacle moment for chunky sneakers. Thanks to the massive popularity of Balenciaga’s Triple S sneaker, designers are now at an arms race over who can create the most monstrous kicks to flood your IG feed. But with the abundance of chunky sneakers currently in market, we can’t help but wonder: has the trend officially reached a plateau?

Since their entire job revolves around forecasting and analyzing trend and consumer behavior, buyers posses the most astute knowledge of fashion’s ever-wavering cyclical tendencies. Of course, each retailer has a specific market and focuses on varied details, but the overall language of trends is universal. With the Fall/Winter 2018 fashion week circuit done and dusted, we asked six buyers from some of the world’s most respected retailers – including West Coast mainstay Union Los Angeles, luxury department store giants Barneys New York and Bergdorf Goodman, Montreal’s SSENSE and UK e-commerce heavyweights MATCHESFASHION.COM and Farfetch  – to weigh in on what the future holds for the ubiquitous chunky sneaker trend.

Would you say that chunky sneakers were the most popular sneaker silhouette with consumers in 2017?

Chris Gibbs, Union Los Angeles Owner No, they are not the most popular. That said, they are en vogue right now and we see a bit of it in our store. But it’s not a full blown take over like other fads we’ve seen come and go.

Chris Pepe, Senior Buyer, Men’s Footwear, Barneys New York The first half of 2017 was all about sock runners with the second half of the year focusing on chunky sneakers.

Damien Paul, Men’s Buying Director, MATCHESFASHION.COM During recent seasons, we’ve seen a shift from the minimal sneaker silhouette to the stacked sole, chunky aesthetic that became prominent towards the end of last year. With many designers adopting this look for their sneakers, it is safe to say that these versions were the most popular by the end of 2017.

Which chunky sneakers have seen the most success?

Chris Gibbs, Union Los Angeles Owner We have been selling the adidas x Raf Simons for a couple seasons now and one of the silhouettes is a bit chunky (Ozweego). We also have a shoe from Brand Black that is chunky as well. They both are performing well!

Bruce Pask, Men’s Fashion Director, Bergdorf Goodman & Neiman Marcus Sock racers and chunky runners were incredibly popular with our Goodman’s customer. Demna Gvasalia at Balenciaga has really created excitement in the sneaker world by amping up and exaggerating the proportions of the outsole in their hit sneaker, the Triple S. And for a shoe that was quite surprising, a bit shocking even, when it first made its debut on the runway, our eye has gotten used to that larger proportion and it now seems like quite the norm.

Damien Paul, Men’s Buying Director, MATCHESFASHION.COM The Balenciaga Triple S was undoubtedly the most coveted piece of menswear footwear in 2017, but we’ve also seen other brands follow suit with their own successful versions of the chunky sneaker. Notable iterations worth mentioning are the Gucci Rhyton and the Eytys Angel, which both sold out on MATCHESFASHION.COM almost immediately.

How have they been performing this year so far?

Chris Pepe, Senior Buyer, Men’s Footwear, Barneys New York The response has been fantastic; some of them don’t make it to the sales floor because we have waiting lists for them.

Federico Barassi, Menswear Buying Director, SSENSE They have been performing very well so far this year; we’re still selling out of the Triple S almost as soon as we put them online, but it’s been consistent across other brands too. The silhouette is still popular.

Damien Paul, Men’s Buying Director, MATCHESFASHION.COM The trend continues to grow with more brands producing versions of this silhouette; we’ve had new deliveries of the Triple S in updated colorways for SS18 that have sold out in minutes – the Triple S has been our best selling footwear style this year so far with our next drop in six weeks time.

What were your favorite chunky sneakers from the FW18 fashion week circuit?

Chris Gibbs, Union Los Angeles Owner We bought a crazy chunky (like, the most chunky shoe I have ever seen) from Marni for FW18. Very excited to see it on the streets!

Federico Barassi, Menswear Buying Director, SSENSE I liked seeing how other brands were interpreting the trend. Some of the highlights for me were the Burberry Regis sneakers with the check pattern, the CALVIN KLEIN 205W39NYC Carlos sneakers, Gucci’s Journey sneaker-boot, the Raf Simons navy and highlighter yellow Ozweego, and an unexpected one was the Fendi translucent runner.

Bruce Pask, Men’s Fashion Director, Bergdorf Goodman & Neiman Marcus For FW18, I really liked the updates to the Triple S with some great new colorways and also the new Security sneaker from Maison Margiela. Chunky runners from Fendi, Alexander McQueen and Valentino were also really intriguing to me and I’m sure will excite our customers.

Damien Paul, Men’s Buying Director, MATCHESFASHION.COM I enjoyed the over embellishment on the latest style from Gucci and the ’90s-inspired stacked soles on display at Vetements were a bold take on the trend.

Which ones will replace the Triple S in terms of “hype”?

Chris Gibbs, Union Los Angeles Owner I think the Triple S is in a league of it’s own. I can’t see too many other sneakers following that one up… It was right place, right time, perfect design. It will be hard to follow.

Chris Pepe, Senior Buyer, Men’s Footwear, Barneys New York I think the debut of Balenciaga’s new trail runners will certainly take pressure off the of the Triple S, but considering how quickly they are selling out, it’s going to be another couple seasons before they are replaced.

Federico Barassi, Menswear Buying Director, SSENSE I don’t know if there will be one sneaker to replace the Triple S with so many other brands coming out with their own version of a chunky sneaker, but only time will tell.

Damien Paul, Men’s Buying Director, MATCHESFASHION.COM We anticipate that Balenciaga’s fine tuning of the Triple S will continue to generate hype and they may even better themselves in this area with the introduction of their hiking-inspired style, which was seen during their FW18 runway show.

Candice Fragis, Buying & Merchandising Director, Farfetch It’s hard to imagine an immediate replacement as they are still doing so well. That said, the 2 Chainz x Versace collaboration is on track to be a best seller.

What does the future hold for the chunky sneaker trend?

Chris Gibbs, Owner, Union LA Not long in this world.

Chris Pepe, Senior Buyer, Men’s Footwear, Barneys New York Like all trends, it will most likely evolve into something else. We’ve been seeing trail runners and true performance runners trend more, so I could see the market move that way. Speaking specifically to footwear, trends seem to happen much quicker than they used to, and overall have become much more cyclical.

Bruce Pask, Men’s Fashion Director, Bergdorf Goodman & Neiman Marcus As we are seeing proportions growing in clothing and sportswear with fuller trousers, jeans, oversized shirts, and big, strong shouldered coats, the larger profile of the chunky runner balances out this equation and grounds the look. It makes literal visual sense.

Damien Paul, Men’s Buying Director, MATCHESFASHION.COM It is important for us to always balance magic and logic; at MATCHESFASHION.COM we’re very much in the business of analyzing our data and statistics on buying patterns in order to anticipate the dissipation of trends.

Be sure to follow Trend Watch for the season’s biggest fashion and footwear fads.