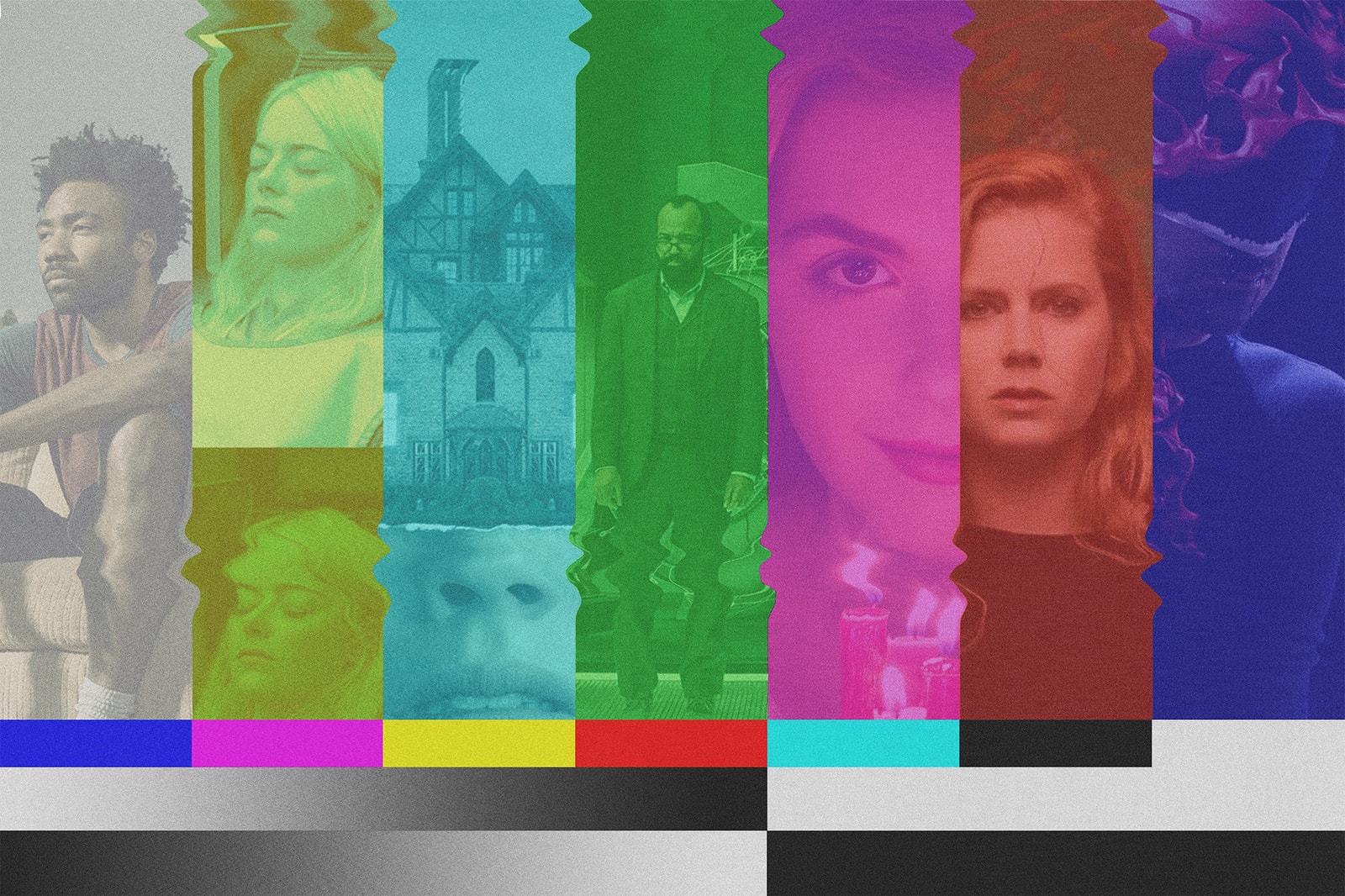 This year brought an abundance of content to the small screen, ranging from network television to streaming services like Netflix and Hulu.

Some shows had episodes air one at a time each week while some dropped all at once. And whether they’re original works, adaptations, remakes, reboots or all of the above, they were able to enrapture viewers with pristine storytelling and titillating visuals.

Sharp Objects is longform Hereditary, if the family were from Missouri and starred Amy Adams. Based on the book of the same name, from Gone Girl author Gillian Flynn, the series follows Adams’ Camille Preaker—a mentally unstable reporter going back home to investigate the murders of two preteen girls while staying with her estranged mother, stepdad, and half-sister. Although this psychological thriller has its moments of horror-laced imagery, it’s an atmospheric slow burn mystery at heart. It showcases the dark underbelly of a small town and the inner mechanics of an unhinged family. This eight-episode miniseries ranks as some of the best television shows to air this decade.

It was the greatest live-action superhero series there ever was, and this season may have been its best outing before Netflix pulled the plug on it altogether. Although the Marvel x Netflix hype was questionably dying well before the subsequent cancellations, Daredevil always upheld a gold standard. This season saw the return of Vincent D’onofrio as The Kingpin, demonstrating a cunningness that solidifies him as one of Marvel’s best on-screen villains, next to Thanos, Killmonger and Loki. Season 3 draws on two of the most compelling tales from the comics, and as such, produced the best Daredevil story thus far. If this is the last we see of Charlie Cox as The Man Without Fear, it was a fantastic close to an amazing series.

We’re living in an age of nostalgia, where our lingering thoughts of “what if?” are being quenched with the revival of countless popular shows and movies we fawned over decades ago. Cobra Kai is a “what if” that is shockingly better than it had to be. The show has heart when it must, is serious when the situation calls for it, and is not afraid to make fun of itself when needed. If you were a fan of the original trilogy, this shines a new light on bully Johnny Lawrence and introduces a new crop of kids echoing the same actions as their Karate Kid predecessors, better than The Force Awakens did with A New Hope. If season 2 proves to be as good, if not better, the show may be the reason to buy YouTube Red.

The Haunting of Hill House

This show took viewers by storm during October for obvious Halloween-related reasons, but the series also happened to serve up some genuine family drama at the heart of its haunted house story. By choosing to focus on the haunting just as much as the fallout it ensues among the targeted family was masterful, a keen insight director Mike Flanagan has with adapting horror stories in modern day. However, instead of leaning into the dark inner-workings of a family like this year’s Sharp Objects and Hereditary, it offers catharsis in its revelations, not only in the characters but in the viewers as well. Which is why the show is seemingly compared to NBC’s This is Us more than anything. Although the series peaks about midway through, the rest of the series offers a strange sense of release as viewers who have already figured out the plot patiently wait for the cast to catch up with them.

Donald Glover leans further into his David Lynch inspirations for Atlanta’s second outing, proving the show has no interest showcasing the black experience through such meager and expected formats comedy shows usually utilize. It’s as artistic as Louie but with the socially conscious grit of Jordan Peele’s Get Out. As such, the show allows Glover to explore black livelihood as well as the culture of the emerging city its named after. But because the show is so non traditional, the series isn’t limited to just revolving around those two subjects, a similar theme evident in Glover’s own career. The comedian-turned-rapper-turned-actor-turned singer has carved out a nice niche for himself as a creative, and even more so as a series creator.

Westworld returns in its second season to build on the experimental plot weaved in the first. The series expounds on the humanity of Artificial Intelligence without compromising the shows established style and violence. Despite providing more questions than answers, this Michael Crichton-inspired series continues to dig deeper in its most interesting aspect, which is the exploration of the meaning and the definition of human existence. As long as it continues to find new and interesting angles to explore this metaphysical theme, it’ll remain one of the more unique shows on premium television.

Maniac’s world is imaginative, as are its visuals. There are stellar performances by Superbad’s Jonah Hill and Emma Stone as well. However, it’s the show’s exploration of the human condition that makes it special. Maniac unifies people who deal with mental illnesses by expressing its universal truths through its story and characters. Everyone’s situation differs, but their illnesses all deal in drawing isolation between people and playing tricks on your frame of mind. Although the show throws a lot at its audience that can take a toll to process, it’s best to just sit back and let the story and world enrapture you instead of picking up on all the subtle nuances your first go around.

Despite being based on the Stephen King multiverse, it doesn’t rest on the laurels of better told stories. Castle Rock carves its own plot that reaches peaks rivaling some of the novelist’s best tales. The show starts off admittedly slow, but begins to gather more and more intrigue as the episodes roll out and the concept of King’s frequent setting of Maine is broadened. Between nods like the Shawshank prison and actors like Carrie’s Sissy Spacek and It’s Bill Skarsgård appearing throughout each episode, the show balances out fanservice with a meticulously thought out plot that’ll leave fans craving a season 2.

Chilling Adventures of Sabrina made three things certain when it debuted on Netflix: that this wasn’t a reboot of the ‘90s sitcom, that Sabrina was in fact based on an Archie comic book in the first place, and that it’s better than most people expected it’d be. The truly horrific visuals may have scared former fans of the franchise away, but in doing so, it enraptured an entirely new audience by sharing the same vibe and universe as CW’s hit Riverdale series. Although teen drama is at the forefront, the show forgoes camp for horror and hijinks for earnest satanic activity, making for a cooler Sabrina and an even cooler series.

Ozark drew obvious Breaking Bad comparisons when it first premiered, however in its second season, it draws a distinct difference between the acclaimed show, which is its grim approach to its characters and subject matter. Where Breaking Bad had characters seemingly manufactured to bring the funny when times get rough, Ozark lets its audience and humor stew in bitter darkness. The show feels more realistic in that way, despite a few awkward missteps with the plot throughout the series. Whether or not the unpredictability of these moves work in the series’ favor overall remains to be seen. And although we get strong performances out of nearly everyone in the season, including star Jason Bateman, the standout actor this season continues to be Laura Linney, solidifying herself as much as an anti-hero as her male counterpart.
Credits