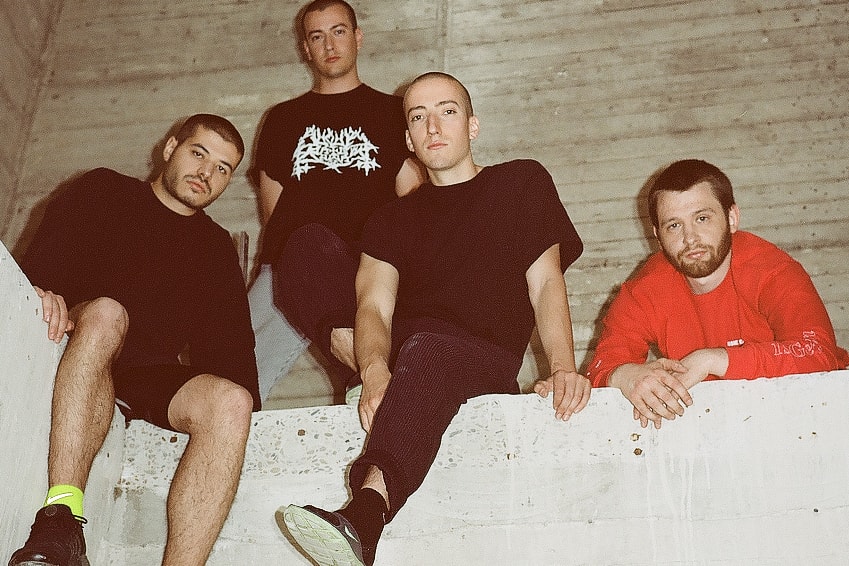 Fashion, Futurism und Design: The Work of Creative Studio Sucuk und Bratwurst
We speak to the Alexander Wang and Nike collaborators on their style and work.

Sucuk und Bratwurst – “It’s just a name,” says Lukas Olgac, Denis Olgac, Alessandro Belliero, and David Goenner. The four designers make up the Berlin-based studio Sucuk und Bratwurst, which specializes in 3D renderings. Lukas explains, “We don’t think you should waste your time trying to find the coolest name but, instead let your work speak for itself.”

And “speak for itself” is what the guys have been doing, their polished hypnagogic renderings earning them a cult following of nearly 30,000 on Instagram. Though their 3D work has attracted the likes of Alexander Wang, Nike, Dazed Beauty, and Post Malone for collaboration, they don’t limit themselves to just digital renderings. The studio has also touched on sculpture, poster graphics, and clothing — you might recognize their designs on the hard-to-miss 032c Motocross collection.

All notable collaborations aside, what’s most interesting about Sucuk und Bratwurst studio is the esoteric genre it works within. Characterized by dark colors, edgy illustrations, and a disregard for legibility, the style has been loosely referred to as “Dystopian Gothic.” Its origin isn’t absolutely clear, but a lot of designers would attribute its inspiration to underground culture and rave flyers. However over the last several years, the genre has evolved to be repurposed in commission by brands, infiltrating mainstream culture with its seemingly counter-culture appeal. While commercial interest in graphic design trends like this is nothing new, it’s a big factor in the way studios like Sucuk und Bratwurst are able to attract more attention.

HYPEBEAST sat down for an interview with Sucuk und Bratwurst, discussing the studio’s approach to this particular aesthetic, as well as the members’ process, training, and opinions on the role of the creative industry in fashion. Read on to learn more.

“If you label yourself to just one thing you are limiting yourself.” How did you guys get together? Is it just the four of you who make up the studio, or do you have other employees?
We met really early back in kindergarten – pissing down the climbing frame. We all grew up in the same city and spend our time together until now. From playing together as kids to working on big Nike campaigns, what remained is the fun we have by doing what we love as a team. We always try to make work not feel like it is work.

For now we are just us four. But as the workload gets bigger and bigger it’s almost impossible for us to wrap our heads around all the jobs. That’s the reason we are thinking about employing some interns to help us out but also to teach new people what we have learned on our way so far. If anyone’s interested, they can message us at work@sucukundbratwurst.de.

There are only a handful of cult designers working in a similar aesthetic to you right now, what would you call this genre or aesthetic?
We personally don’t define our style to be something specific. We always try to evolve and explore new things digital and analog. If you label yourself to just one thing you are limiting yourself. We think the best is to do what you want to do and what you love. Stop trying to define things and start to do things.

“The most challenging things to render look like they wouldn’t be challenging.”I read that SelamX is an inspiration for you, is there anyone else you look to?
We love all our friends and like to collaborate and exchange knowledge wherever we can. If someone has a problem we take care of each other – may this be in work or life problems, that’s the best inspiration we get in life.

Can you tell us a bit about the process of making one of your 3D renderings from start to finish? How do you guys collaborate on a project, and who does what part?
We first gather ideas and figure out what would fit best for the given task. Then one of us just starts and the others jump in where needed. We are all working together on projects, from the idea to the to result. It’s about the details! Sometimes you just do things because of details that no one will ever see or understand. I think that will never change, but everything will change, either way that is okay.

It also really depends on the project.

How do you go about the process with clients like Nike and Alexander Wang, is there a lot of back and forth with the initial sketches?
This is really different from project to project. Sometimes there is a briefing, sometimes we are free to do what we would love to do. Of course everyone just wants the best result.

What was your first paid project together as a studio?
We started with party flyers!

What’s one of the hardest or more complicated projects you’ve taken on?
The most complicated projects in terms of 3D are the ones where you do things the first time or need to figure out how to do things even before really starting to work. But that can also be a fun process where you learn new things, experiment, and find new workflows. But looking back on all the jobs we’ve done we can’t really say what job has been the most difficult. We can’t even remember what we did yesterday.

“Maybe the fight for originality and creative ownership goes hand in hand with how fast the internet is evolving and how fast people are shooting out ideas into the void.”What sort of imagery is particularly challenging to render?
The most challenging things to render look like they wouldn’t be challenging. Everyone has another perception of beauty or life, so maybe someone loves it or maybe not. Who knows. We don’t care.

Did you guys study what you’re doing in university or are you self-taught?
None of us learned to do 3D in school or university. But we all agree on one opinion: FUCK SCHOOL. Cause everything we know we learned from ourselves or from each other. WE ARE A FAMILY. If someone doesn’t know something there are three guys who are helping out! You know what, do what you love!!

Do you think going to art/design school is still relevant today when there’s so many tutorials online?
You really don’t need to go to school to get good at something. The only advantage that school is going to give you is that people won’t tell you to do something with your life and to go study/get a job. You could also spend the same time on your own watching online tutorials and learning design – but I bet most people would call this a waste of time since in their eyes, you have to go to school and get a certificate to be good at something. It’s just more established.

Was the creative industry what you expected it to be like when you started?
We really didn’t expect anything when we started. We just did our thing and shot it out into the web. We also did not care about whether anyone even liked what we were doing. It was just for us and it kinda still is. We just do what we love. Now is now. Past is past. And future is home.

CGI influencers like Lil Miquela have become both popular and profitable in the fashion world, while brands like Carlings are releasing strictly digital clothing collections, and Balenciaga is bending reality with 3D models. What are some benefits you see to using 3D for fashion in the future?
For fashion, 3D is really useful because it just gives you photorealistic results in almost no time! You can have a 360-degree garment that is prototyped in 3D and see if it would work in a collection or something. No need to cut and sew things in real life. Just prototype and see what works. In the best case you can then just export your 3D model as a sewing pattern and you are ready to go. Brands are also way more flexible when using 3D instead of photographing their collections.

With a lot of creative work ending up online and on Instagram, there’s a movement of “call-out culture” right now – people pointing out who’s copying who, whether it’s Diet Prada calling out fashion designers, or kindaremindsmeof calling out graphic designers. Do you guys have any thoughts on what’s going on with the fight for originality and creative ownership? Have you experienced any cases of people stealing your work, or others accusing you of stealing theirs?
Maybe the fight for originality and creative ownership goes hand in hand with how fast the internet is evolving and how fast people are shooting out ideas into the void. You have to be fast or someone else may come up with the same idea – that can happen of course. You also have to differentiate between simply copying and just redoing something in another way or taking something/being inspired by something and adding your personal spin to it. The latter is totally okay to do in our opinion – while just copying or even using someone else’s artwork for you own advantage is not really okay.