Following last year’s debut, Art Basel Hong Kong again took the city by storm, showcasing 245 galleries from 39 countries with 2,000 artists. Split between six sectors — Galleries, Insights, Discoveries, Encounters, Magazine and Film — the fair grew by 10% with 65,000 participants over four days. It united artists, collectors, and art aficionados at the Hong Kong Convention and Exhibition Centre. Over half of the galleries came from the Asia Pacific, affirming an Asian sensibility compared to its other stops — Basel in Switzerland and Miami in the United States. 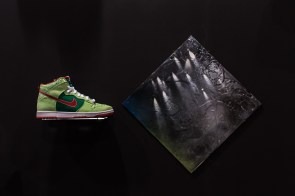 “With the understanding of Hong Kong’s multicultural audience, we spoke with a few gallerists to see how the location of the fair influenced their curation.”

Founded in 1970, Art Basel made a debut in its namesake city. Situated on the border of Switzerland, France and Germany, the town is one of Europe’s heritage destinations. Its Miami sibling by contrast is one of the more progressive cities in the U.S. Often called “the gateway to China,” Hong Kong strikes a balance between the two cities. With an English-speaking population and a cosmopolitan lifestyle, Hong Kong has nurtured an international community. Yet situated at the edge of mainland China, Hong Kong also has a strong Chinese cultural heritage. This dichotomy ensures displays from Picasso, Renoir, Matisse and Chagall, and can effectively sit side-by-side with Hua Tunan, Liu Wei, Zeng Fanzhi and Yue Minjun.

With the understanding of Hong Kong’s multicultural audience, we spoke with a few gallerists to see how the location of the fair influenced their curation. Anna Schwartz Gallery of Melbourne looked to Basel as a platform to expand the gallery’s reach. “Being from Australia we’re part of the Asia Pacific, so this is a key market for us. We don’t only showcase Australian artists. We (also) show work from Angela De la Cruz and Yinka Shonibare, alongside British and American artists.” Among the booth’s standout pieces was a sneaker-inspired installation by Shaun Gladwell. The mixed-media piece comments on consumerism by drawing motifs from street culture and the galaxy.

Joseph Ng, Director of the Shanghai Gallery of Art, designed his booth with the local audience in mind. He decided to strike a balance between being adventurous and economically smart. “While I don’t compromise on the quality of the work to fit any trend, I present pieces that relate with the local audience.” With Hong Kong’s geography as a key motif, Ng invited artists to create work based around the theme “Island.” With this in mind, San Francisco-based Shanghainese artist Zeng Chongbin departed from his own genre of abstract acrylic paintings to explore ideas of physicality and mass. 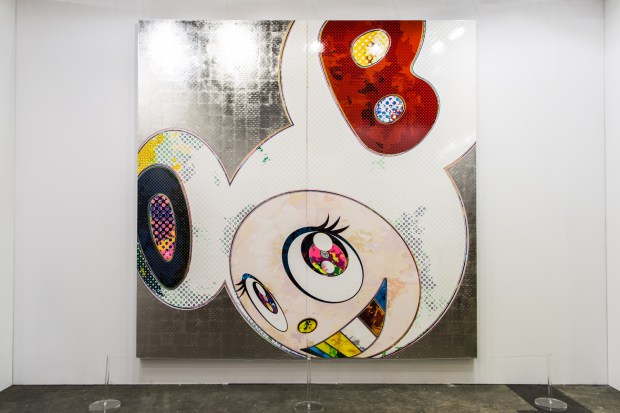 “According to calculations reported by The New York Times, China will overtake the United States in purchasing power by the end of 2014.”

Kaikai Kiki Gallery — belonging to celebrated Japanese contemporary artist Takashi Murakami — also took part. With headquarters in Tokyo and an office in Taipei, Kaikai Kiki are familiar in the Asian market and adapt to each fair according to the location. This year, Kaikai Kiki bridged East and West with work from Japanese painter Kazumi Nakamura alongside German visual artist Friedrich Kunath. “Takashi’s choice meant that there was a lot of dimension for different age groups and styles. We want to introduce Western artists like Kunath to the Eastern world and vice versa. Hong Kong is the best place to do this because you’re not just targeting China but also an international market,” noted Shinichi Kitahara, Director of Exhibition Production.

Other galleries such as Zurich’s Karma International learned from its mistakes and revised its strategies this year. Having been frequent exhibitors at both the U.S. and European Art Basel shows, the gallery took a leap by coming to Asia last year but did not sell anything. “We brought the wrong artwork” said Karolina, co-owner of Karma International. The gallery was taken aback by the buying patterns and demographics of Hong Kong. “It’s a very different market here; you’ll never meet the people you see in Miami or New York.” Now here for their second year, they exhibited work from two Swiss artists: Pamela Rosenkranz who will represent Switzerland in the next Venice Biennale, and David Hominal, a classical painter who Karolina thinks will be more fitting. “Painting mostly talks to people and isn’t overwhelming.”

According to calculations reported by The New York Times, China will overtake the United States in purchasing power by the end of 2014. This so-called “eastward shift” has been acknowledged by art dealers, many of whom showcased modern and contemporary works this year. We spoke with a few gallerists to learn more about the reception of the attendees. Mang Ziyan of Aye Gallery estimated that 40% of their sales came from China, 30% from Hong Kong, and 30% internationally. Mang feels that Asian collectors are more concerned about price while Western collectors will put the art first and foremost. “Although we’re based in Beijing, many mainland Chinese come to Hong Kong to buy Chinese art because they know we’ll bring the best pieces to the fair.”

Shinichi Kitahara also observed differences amongst collectors, noting two key types: those who do their research and are well-versed on the context, and those who are more spontaneous. “Some people might not know Nakamura, but they’ll buy a piece on the spot because they fall in love with his work there and then. An art fair can produce that effect – almost like meeting someone unexpectedly. It’s a very exciting moment.” Karolina saw this as a cultural difference: “The Chinese buy very fast, but the Europeans desire more conversation before the purchase.” 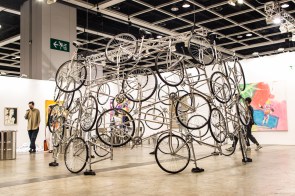 “One can’t deny the wave of creative energy that descended upon the city over
the week.”

Regardless of whether you’re a buyer, exhibitor or simply an art enthusiast broadening your horizon in the art world, one can’t deny the wave of creative energy that descended upon the city over the week. The growth of the event is an example of the city’s growing appetite for art and creativity, one which has allowed old faces to return. British street artist D*Face exhibited in Hong Kong as part of a modest group show in 2009. This year, he returned to put on a sold out solo show at independent gallery Above Second, while also painting exclusive pieces for PMQ — a newly-opened, self-financed design center — alongside EVISU’s flagship store and Bibo, a high-end French restaurant filled with lavish art from the likes of Banksy, Damien Hirst, Andy Warhol and Space Invadar. “This trip has exceeded my expectation, there’s such a strong energy and emphasis on street art, no one gave a shit about any of this last time I was here.” D*Face’s experience is only a reflection of Hong Kong’s inclination towards contemporary art in both commercial and independent sectors.

Stussy and Vans bring together their most favored motifs for a new collection this season. Taking
By HB Team/May 27, 2014
May 27, 2014
0 Comments
Fashion

HYPEBEAST x VSCO Curated Grid: A Look at Some of Our Favorite Images

Earlier this month, HYPEBEAST had the honor of working with VSCO on the creation of two of its very
By Staff/May 27, 2014
May 27, 2014
0 Comments
Fashion

Known for its unique Mexican tribal and vintage military influences, U.S. Alteration returns for
By HB Team/May 27, 2014
May 27, 2014
0 Comments
Music

Gesaffelstein at The Fonda Theatre in Los Angeles

As the genre further integrates into pop culture, a new generation of electronic musicians strive
By HB Team/May 27, 2014
May 27, 2014
0 Comments
Music

Mike Levy, better known as his recording alias Gesaffelstein, graced the glorious stage of
By admin/May 27, 2014
May 27, 2014
0 Comments
More ▾