We used to have a spot in New York City called 12th and A. At first glance, it wasn’t much: a basketball court decorated with driveway flatbars, a shortened picnic table, and a couple of ramps. DIY ledges lined the walls on the left side, parallel from the wooden bleachers where we enjoyed post-session smokes.

As much as I love skateboarding, I do sometimes miss the days of playing soccer on basketball courts like those. Before I picked up a plank, I preferred Kaká to Koston; Henry to Hsu; and when I wasn’t on the pitch, I was dribbling between foul lines and shooting at trashcans. It’s funny how those symbols reoccur, and makes me think that the first time I stood awkwardly on my friend’s 7.5-inch Zero board, Sambas scuffed after a long stretch of street futsal, was nothing but one of the universe’s great, beautiful intentions.

When I caught wind thatSB would be appropriating the Lunar Gato silhouette for skateboarding, these memories came rushing back. After somehow missing literally every soccer-inspired SB release – from the Zoom FC to the Zoom FC x FP – my heart fluttered at this new shoe crush. I strove to channel my inner Gino ever since I saw Yeah Right, and now seemed like the definitive opportunity to see if the shoes I coveted in the past would stand the modern test.

First and foremost, the Lunar Gato is a handsome shoe; kudos to Nike for picking such a solid silhouette to transform. The toecap does away with the T-shaped paneling as seen on the Zoom FC and Zoom FC x FP, and is replaced with faux-stitched one-piece suede layer. The suede is also treated with a thin, rough material around the tip. Staying true to the original silhouette, subtle vectoring around the midfoot gives the shoe a subtly aggressive feel, while also housing cleverly placed triangular mesh hits.

Notably (for me), the Lunar Gato has the same tongue as the SB Bruin, SB Dunk Low Pro and countless other low profile models by the Swoosh. Composed of breathable mesh, the tongue is generally flat through the dorsum of the foot, until a thin layer of stitching creates a small lip at the top. Accordingly, and consistent with the sartorial interests of this site, the Lunar Gato looks best with wider pant leg openings.

Having taken cues from a soccer silhouette, it seems natural that the SB Lunar Gato would fit on the narrow side. Compounded by Nike SB’s preference for slim-fitting sneakers, the shoe probably isn’t optimal for the wide-of-foot. Like the original Gato and other soccer silhouettes, the SB Lunar Gato has a pronounced, rounded heel, which locks the foot securely into place.

Alongside this, the SB Lunar Gato is one of the most lightweight sneakers of recent memory. This attribute owes thanks to the full Lunarlon midsole that makes up for a good part of the sneaker’s composition. There’s little room for external insoles, as the Lunar Gato’s existing insert is one of the most slender offerings on the market (see: “Cushioning”). However, the solid construction of the shoe supports the arch reasonably. Ultimately, the SB Gato can best be described as snug, but also stretches out comfortably as the suede wears in.

Indoor soccer sneakers and skate shoes have similar goals. Both silhouettes compact the toes, desiring to streamline the foot and achieve the most precision. The SB Lunar Gato falls nicely into this category, achieving supreme boardfeel through clever use of layering, as well as its natural shape.

Naturally, the lower portion of the SB Lunar Gato has two key parts: the midsole and the outsole. The sneaker opts for a fully pronounced Lunarlon midsole, which begins after the toe box and runs through the heel. The outsole is composed of articulating gum rubber, divided into hexagons with traditional herringbone tread. This thin gum portion runs prominently along the bottom, yet also extends to the toe to make up a durable, pointed area of impact. The outsole’s slimness is a key driving factor in both boardfeel and durability. The rubber protects the Lunarlon foam from getting quickly damaged at key areas of impact, drastically reducing weight while allowing maximum board intimacy.

The word “streamlined” doesn’t exactly describe the shape of the SB Lunar Gato. On foot, it looks and feels a bit like a bullet cut in half. The toe subtly curves toward a peak at the big toe, where it then carves around through the beginning of the metatarsal. This puts a nice emphasis on the balls of the foot, allowing the wearer confident foot placement without having to compensate for excess material. More importantly though, this ‘bullet’ shape means exceptionally responsive flip tricks without using too much ankle power, and also allows the foot to accurately control grinds. 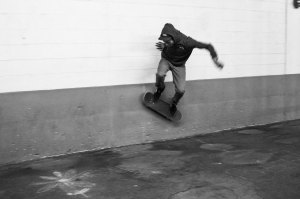 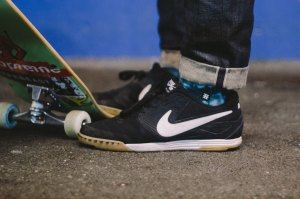 In any urban area, it’s likely that there are more rough and gravelly streets than smooth ones. Surely, I haven’t been the first to fall headfirst into the street after being tripped by a piece of wayward concrete. In some shoes, those surfaces are grounds to pick up the board and walk, as the resulting vibration to the balls of my feet becomes unbearable. The SB Lunar Gato, thanks to its Lunarlon midsole, almost completely erased those pangs from my memory.

Since its introduction in 2008, Lunarlon has helped accentuate the cushioning properties of running and basketball sneakers across the board. 30% lighter than standard Phylon foam, Lunarlon basically works by distributing impact throughout its entire surface – as opposed to concentrating it in one area. Nike applied the material to its skateboarding footwear in 2011, beginning with a removable insert seen with Eric Koston’s first signature shoe.

The SB Lunar Gato, accordingly, represents a new application for the material. The entire midsole is composed of the space-age stuff, which cuts down the sneaker’s weight while also ensuring a comfortable ride. Accordingly, there’s no Zoom Air insole as per the SB Janoski or Dunk, but rather, an extraordinarily thin removable insert. This component feels more a formality than anything particularly functional, but the Lunarlon successfully accounts for the absence in the heel.

Conversely, the collar of the sneaker is relatively unpadded. Though the foot feels locked into place, the low opening of the shoe barely touches the ankle. This lends the ankle increased freedom to move, but also leaves it more susceptible to the occasional roll. Alas, such is the gamble with skating in low tops, but the SB Gato might do well with additional padding around the mouth of the shoe.

I like to imagine boardfeel and durability as directly proportional; what a shoe promises in boardfeel, it almost certainly lacks in tolerance. Let’s call this the “flop factor.” While we’ve explored the importance of Lunarlon in terms of support, it also plays an important role in what makes the SB Lunar Gato a truly rugged shoe – one with an impressively low flop factor.

Though necessarily lightweight and spongy – as foams tend to be – Lunarlon is rigid enough that it provides a fixed resistance throughout the sole without flopping out. This means that the body of the shoe begins as sturdily as it ends, without really “breaking in” in the traditional sense. To compensate for this, the rubber outsole softens, grinding down to a preferred shape with every trick. It was slightly puzzling why Nike SB decided to include stitching at the side of the forefoot, which quickly frays at the beginning. However, once these initial strands are rasped away, the shoe’s lengthy lifespan is revealed.

While the premium suede on this shoe is noticeably thick, it is also reinforced with a thin film of gritty material around the tips of the toes. Over the course of this review, this material showed no signs of wear, and lasted beyond the life of the first set of laces. Even at the sides, which take the most abuse and have no second layer, the upper of the shoe showed little signs of wear. Thanks to the seamless toecap, the sneaker is drastically less prone to Ollie holes and blowouts– no Krazy Glue necessary. 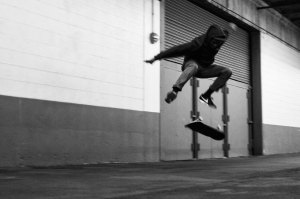 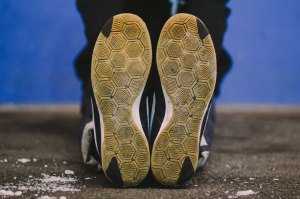 “Though necessarily lightweight and spongy – as foams tend to be – Lunarlon is rigid enough that it provides a fixed resistance throughout the sole without flopping out. This means that the body of the shoe begins as sturdily as it ends, without really “breaking in” in the traditional sense.”

This sneaker is inevitably bound for criticism from the wiseguy contingency, as ultimately, Nike SB didn’t change an extraordinary amount from the original in creating this skate-ready model. However, they did change exactly what they needed to. Though not nearly as promoted as, say, the Project B.A. this year, the Nike SB Lunar Gato is well worthy of its Swoosh. It’s an easy shoe to wear everyday, with versatile aesthetics and exceptional performance. Initial frays aside, the durability of the shoe cannot be iterated enough, and at a retail price of $90 USD, potential buyers can be rest assured that they’ll get their money’s worth.

With the 2014 World Cup quickly approaching, skateboarders can bet their beanies that a slew of irresistible colorways are in store for next summer. In the meantime, head over to your local skate shop to pick up the Nike SB Lunar Gato.

“It’s an easy shoe to wear everyday, with versatile aesthetics and exceptional performance.”

Complete with distinct embellishments in relation to the MLB team.
By Sammy Su/Feb 10, 2022
Feb 10, 2022
7 Comments
Footwear

Have a Taste of Nike’s SB Dunk Low “Blue Raspberry”

ICECREAM Sale on PLNDR Round 2

PLNDR once again hosts a selection of drops from’ ICECREAM and offers them at clear-out prices,
By Staff/Jan 16, 2014
Jan 16, 2014
0 Comments
Footwear Fashion

Despite the city’s notoriously aggressive laws, Philadelphia has a long legacy of skateboarding,
By Josh Davis/Jan 16, 2014
Jan 16, 2014
0 Comments
Food & Beverage

The First Kit Kat Store to Open in Tokyo

Amongst a slew of other points, many countries lag behind Japan when it comes to Kit Kats. The
By Staff/Jan 16, 2014
Jan 16, 2014
0 Comments
Footwear Fashion

A Close-Up Look at Terminal 23 by Jordan Brand

Stan Smith on the Enduring Legacy of His Signature Shoe

adidas Originals may have only just taken the wraps off its upcoming ZX FLUX silhouette but it
By James Shorrock/Jan 16, 2014
Jan 16, 2014
0 Comments
Music

Ever wanted to own you very own DOOM mask? Here’s your chance, sort of. The enigmatic rhymesayer
By Petar Kujundzic/Jan 16, 2014
Jan 16, 2014
0 Comments
Music

In support of his upcoming instrumental compilation The Dutch, Jeftuz delivers the project’s second
By admin/Jan 16, 2014
Jan 16, 2014
0 Comments
More ▾