Nestled in quaint Stratham, New Hampshire, the Timberland Global Headquarters is immersed in exactly the type of rugged landscape that necessitates the brand’s creations. Timberland’s brand identity is fed from the outlying area of New England, from the jagged coastline and long winters. However, the relationship between Timberland and New England could more properly be described as give-and-take. In the manner that Timberland has derived inspiration from the climate and culture of the Gulf of Maine, the brand now gives back by actively working with independent New England companies — the thinkers and solvers that embody the ideas that Timberland was founded on. For decades, the yellow Timberland 6” has been a workwear icon and from the innovation behind this boot has sprung something much greater. While the “01” — an affectionate name derived from the SKU of the 6” boot — is upheld as a crucial part of the company’s catalog, Timberland’s offerings for both men and women have been broadening in recent years. 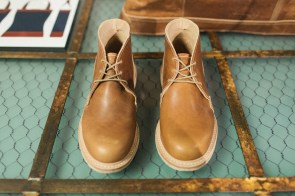 “The brand is more conscious now than ever about what modern consumers want in terms of fit
and style.”

Today, the brand excels in applying its heritage to modern apparel that exists somewhere between refined and rugged. Through its heritage, Timberland tells a story of challenging weather that demands resilience, yet the brand is more conscious than ever about what modern consumers want in terms of fit and style. Adopting the adage “Best Then, Better Now” to reflect a positive sentiment about the brand’s history, this also shows the road ahead is viewed, as the brand has started building around a model of stylish performance products for contemporary markets.

The sense of authentic New England craftsmanship is hard to overlook during our tour of the headquarters. After an up-close look at where Timberland boots are tested and perfected, we stopped by the former Timberland factory, where rumour has it that an employee gazed out a window at the forest opposite and created the brand’s tree logo. Our New England experience was capped off by a stroll along the coast and the opportunity to conduct a trial test of the original yellow boots. 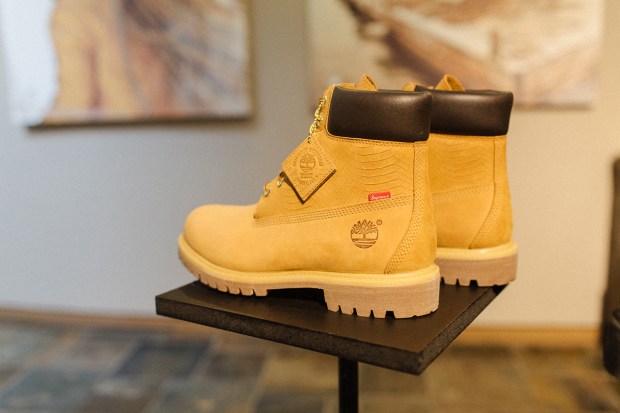 “Not only have these past collaborations been well-received in the streetwear community, but Timberland seems primed to deliver some exciting things in the future.”

Part of our visit to the HQ included a glance at the top-secret “Inspiration Room” of Creative Director Chris Pawlus. Filled with mood boards and photo decks forecasting the next few seasons of Timberland, this is the meditative temple of Pawlus — the individual responsible for bringing to life most of the brand’s niche collaborations, including recent projects with Stussy, Ronnie Fieg, Supreme and others. He mentions that “partnering with influential designers and retailers helps add to Timberland’s iconic status and allows others to express their artistic vision through our footwear.”

Not only have these past collaborations been well-received in the streetwear community, but Timberland seems primed to deliver some exciting things in the future. To start, people certainly paid attention when Kanye West chose to deck out models in Timbs during his A.P.C. presentation in Paris.

The Future for Timberland 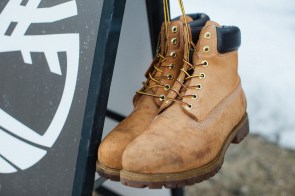 “It remains a challenge for any clothing company with a longstanding history to re-contextualize their branding for modern consumers.”

One of the most fascinating chapters in the brand’s history concerns the wide support the 6” model has received in hip-hop circles. Among the names to not only wear the boots, but also reference them in their music, were the Wu-Tang Clan, Biggie Smalls and Tupac — some of the biggest hitters of the ‘90s. Today, this trend persists with names ranging from Rihanna to Jay Z sporting the 6” model as their boot of choice, as well as a particular producer who even chose the brand as his namesake — Timbaland. Murmurs of a Kanye collaboration, however, were quickly dispelled by Pawlus, who mentioned, “We do not have a collaboration currently planned with Kanye West… Timberland loves to partner with influencers who have made their mark on the world of fashion, art and culture, and Kanye is definitely one of those people. However, we do not have anything in the works.”

While celebrities and musicians stay rocking the Timberland brand, however, it remains a challenge for any clothing company with a longstanding history to re-contextualize their branding for modern consumers. Timberland is addressing this issue by upholding its heritage and simultaneously implementing progressive technologies. A recent addition to the Timberland catalog, Sensorflex™, offers a sole that instantly adapts to any terrain. It’s a three-layer platform that includes flex grooves for independent movement, a suspension layer for cushioning and a stability layer for support.

It’s innovations like these that balance the history and heritage of the quintessential American brand. The need to progress and maintain relevancy is always important for any brand, but for Timberland it occurs without ever compromising the brand’s core DNA. Just as consumers have embraced the past and present, the future is just as bright.

Dior's Snow Ankle Boot Is Here to Take Over Winter

The black, brown, and beige colorways are made from leather and a water-repellent quilted Dior Oblique Mirage technical fabric.
By Eric Brain/Sep 11, 2021
Sep 11, 2021
1 Comments
Gaming

'Hot Wheels Unleashed' Packs DLC With Content From 'Street Fighter,' 'Back to the Future,' 'Batman' and More

Chance The Rapper - The Writer

As of late, Chance the Rapper has been letting loose of several new songs, and the most recent cut
By Patrick Montes/Apr 9, 2014
Apr 9, 2014
0 Comments
Fashion

Matt Powell Discusses The Economy of Sneakers in Forbes

It might be easy to overlook this, but beyond the vast submarket of eBay markups and sneaker
By Josh Davis/Apr 9, 2014
Apr 9, 2014
0 Comments
Music

Whether you’re a cigar-smoking, whiskey-drinking Englishman, a rugby player, or someone who simply
By Jonathan Poh/Apr 9, 2014
Apr 9, 2014
0 Comments
Footwear Fashion