This summer, that next can of Sprite you grab at your local liquor store or gas station might feature some lyrics by some of the rap game’s most popular and acclaimed lyricists. Sprite has announced that they are producing 16 different, limited-edition designs for their products set to hit retailers in the coming season, each containing bars from rappers such as Nas, Drake, Rakim and The Notorious B.I.G. According to Sprite’s press release, the emcees selected for the campaign were chosen because of “their reputation for being true to themselves through their music and advancing the culture.” The beverage giant’s new ”Obey Your Verse” Lyrical Collection will include cans, packs and 20-ounce bottles, and will run through the entire summer. Check out a full breakdown of the collection and its inclusions below. 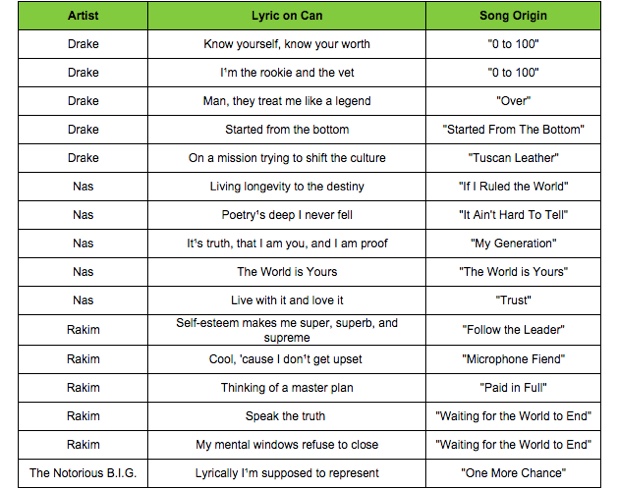 The upcoming documentary was created alongside the celebrated rapper’s estate.
By HB Team/Feb 15, 2021
Feb 15, 2021
0 Comments
Design

Appropriately tagged with only #DRUGS on SoundCloud, Richposlim and T-Bruin just dropped a new
By Rae Witte/Jun 11, 2015
Jun 11, 2015
0 Comments
Music

Katy Perry became one of the few artists to have their video pass the milestone mark of one billion
By Rae Witte/Jun 11, 2015
Jun 11, 2015
0 Comments
Design

Expanding on their existing Essential Artist Bottle Series – which, from the brand itself, gives
By Josh Davis/Jun 11, 2015
Jun 11, 2015
0 Comments
Music