This is a shoe that needs no introduction. Throughout all my years in the world of footwear — both working in the industry and as a collector — nothing has come close to the level of attention garnered by the Air Yeezy 2 Red Octobers. Sports, fashion, music are all massively influential things in our culture but few shoes have brought all these elements together like the Yeezy 2. In the post-Run-D.M.C. and my adidas era, there have been few shoes that quite caught fire like these did. No disrespect to the likes of Jay Z and 50 Cent with RBK, but this is a step further than anything in the past with the actual artist involved in the design.

With a frantic launch, it all seemed like quite a hazy experience. Before it was all said and done… the shoe was gone. Many people were left in the dark across the board and no official statement fromwas released right around the time of Yeezy’s controversial joining of adidas. Retailer friends of mine originally took stock of the shoes at their stores, only to have Nike change the release and have them picked up again due to the rapid series of events that accompanied various Ye interviews and concert rants.

The shoe’s release was extremely polarizing, with a ton of emotion and passion created within our sneaker community and, arguably, influencing the tonal red releases that seemed to drop one after another in the wake of the Red October’s announcement. With all the hype came a strong love and hate relationship, evoking some strong words even from Ye himself… but how did the product this time around stand up?

One and Two does Not Equal Three… 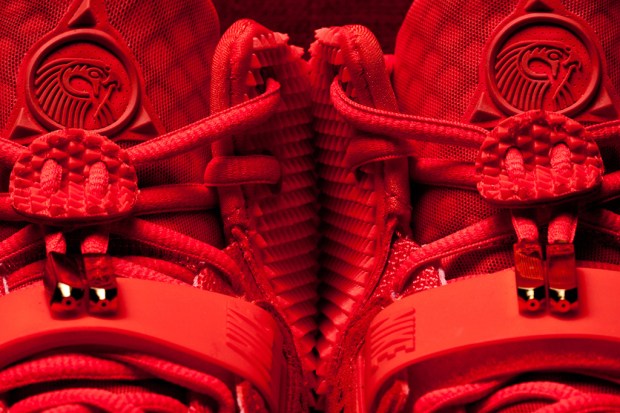 “On the red colorway this seemed to be rectified (the problem of aglets falling off) with more threads on the screw for the aglets.”

Between the black and grey versions of the first drop, there was a noticeable difference in the mesh. The grey joints had a reflective backing which could easily be seen from different angles of light or simply shining a light on the materials.

There was an obvious change and difference in this third drop with the material specs. The quarter panel originally featured a textured leather with surface cuts to mimic snakeskin between the forefoot and the heel in the first drop. In the third release, they were replaced by textile pieces with poured PU (polyurethane) rubber 3D triangles on it. Following this change the Swoosh was also modified into a molded piece with small design details to align visually with the new piece mentioned before.

Another change was the design of the aglets (often known as lace tips). If you reference Kanye wearing the shoes in past images (such as this image from Sole Collector), you see that even his pairs don’t have the metal aglets, which was one of the unique design elements of the shoe. But to be honest, there were some flaws in the construction. I basically lost all four aglets after two weeks of wear in my rotation. On the red colorway this seemed to be rectified with more threads on the screw for the aglets.

In terms of construction the shoe is not that complicated. The most challenging part on this shoe is probably the collar area because there are many layers. Also the molded back piece coming together needs to be carefully constructed to avoid an irregular collar line.

A Dip in Quality… 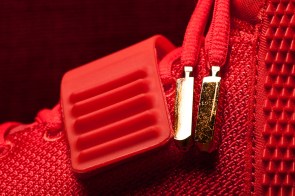 “It’s hard for me to explain why the production side wasn’t able to reach the certain level of quality one would associate with a shoe like the Yeezy II.”

Regarding the quality, I’m a bit surprised to be honest. Midsole painting executions were never something Nike was outstanding at. I have a handful of Air Max models where the edges aren’t clean with overlapping paint. But the quality of the paint job on these were next level in a negative way. You might have been lucky and received a better pair but the ones I have seen so far are far from well-executed.

It’s hard for me to explain why the production side wasn’t able to reach the certain level of quality one would associate with a shoe like the Yeezy II that also carries a not so wallet-friendly retail price of $245 USD. The shoe itself isn’t exactly a new piece of design with new elements to it, it’s been around long enough to attain a certain quality level.

Also the backing of some materials are white, despite the fact the model is fully tonal red. Personally I would have gone the extra mile to make those small and obvious details in materials in a way that matches such an important and highly regarded release.

But just like the controversy behind my previous FOB assessment of the Y-3 Qasa, we don’t have access to all the production details or the scheduling and circumstances behind the drop. But as a big fan, you could say I’m little disappointed as there’s a strong core of the Yeezy audience and consumer that would appreciate all the details that go along with it. 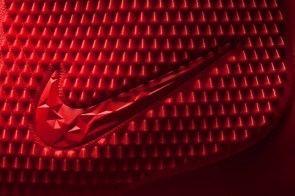 “Whether you have a pair or not, just being able to see and follow what people are willing to pay or do for a pair is a testament to its deserved hype.”

This is a great shoe. Whether you have a pair or not, just being able to see and follow what people are willing to pay or do for a pair is a testament to its deserved hype. An interesting thought is that from a marketing perspective, Kanye West has shown on several occasions that he’s capable of making a very desirable product. But one of Kanye West’s most notable quotes entailed his inability to create the product he wanted, due to a lack of knowledge and expertise. I believe that he just could not find the the right team with development and production expertise to achieve his vision and goals. I don’t want to speculate how much money was spent but in reality he would have been capable to do everything he wanted with a designer, developer and him – himself as the product manager instead of going with a major brand.

Andy Chiu has been an avid sneaker collector since 1991. Making the trip from his native Germany to the ’92 Olympics, he was inspired by the U.S. Dream Team’s dominating performance in Barcelona — and of course the shoes on their feet. While Chiu’s initial experiences in the professional world took him to L’Oreal and Mercedes-Benz, this love for footwear saw Chiu return to his first love. Joining the industry though adidas Originals, he introduced the adidas Originals’ Consortium range as well as other highly influential projects, including a HYPEBEAST x adidas x Solebox project at the adidas Performance Division. Soon after, he joined PUMA, heading up their motorsports business. Currently, Chiu serves as German beer brand Warsteiner’s brand & creative director. You can get more information on him through his Instagram account @ashchiu.

Brainfeeder producer Teebs has been very sporadic with his music releases for the past year, but
By 2ichard3rooks/Apr 2, 2014
Apr 2, 2014
0 Comments
Music

Just a couple weeks away from the release of his debut album Testimony, New Orleans crooner August
By Patrick Montes/Apr 2, 2014
Apr 2, 2014
0 Comments
Music

17 year old Max Wonders is prepping his next project, The Wonder Tape, for this Spring and today is
By Davis Huynh/Apr 2, 2014
Apr 2, 2014
0 Comments
Sports Entertainment

Teased over the past few weeks with tidbits of technology, Amazon has finally taken the lid off of
By Staff/Apr 2, 2014
Apr 2, 2014
0 Comments
Music

During its first year of existence, Jay Z’s Roc Nation Sports has caused quite some noise within
By Petar Kujundzic/Apr 2, 2014
Apr 2, 2014
0 Comments
Footwear Fashion

Ideal for everything from sessions at the gym to weekend getaways, duffle bags are spacious and
By HB Team/Apr 2, 2014
Apr 2, 2014
0 Comments
Fashion