Having already made a reputation for himself for the strong minimalist sophistication of his collections, designer Lee Roach traces his expertise back to his work on London’s famous Savile Row as well as with fellow designers Kilgour, Peter Saville and Meadham Kirchhoff. Shortly before founding his brand of the same name, he graduated with a BA from Central Saint Martins back in 2010 with his Spring/Summer 2011 collection earning a spot in the Selfridges ‘Bright Young Things’ initiative.’ The creative director of the up-and-coming British minimalist menswear label shared some thoughts on the brand’s design ethos and its most recent collection. 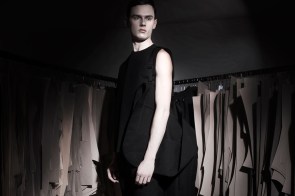 “The focus is primarily on creating menswear that reflects the needs of modern lifestyle, while the approach comes from the removal of excessive components.”

Can you introduce yourself?

I am the creative director of LEE ROACH, a London-based menswear brand.

The label’s philosophy focuses on minimalism. What are the challenges into achieving a minimalist vs. underwhelming design?

The philosophy comes from the way in which the garment is conceived and the use of fabrics. This in itself translates in a modern aesthetic, minimal as a result of process.

The focus is primarily on creating menswear that reflects the needs of modern lifestyle, while the approach comes from the removal of excessive components, which through the process of reduction, produces a refined modern garment that I believe relates to the current multifaceted way in which we live.

The garment poses a formality through its cut and adherence to traditional garment shapes whilst the unlined, unstructured construction allows the wearer feel completely comfortable and additionally this allows you fold and pack the garments in a way that traditional tailored garments do not allow, with minimal effect on the garment when unpacked.

What considerations are paramount when it comes to designing?

Construction, function and fabrication. All three inform one another constantly and do not exist independently.

The modern lifestyle is an ongoing/perennial consideration, the way in which we consistently travel and attend numerous events/meetings in a single day of varying degrees. There is a continued questioning of formality and function, typical articulation of tailoring in the form of canvas and padding is removed, garments are carefully balanced, through construction and fabrication. These considerations are paramount and continue to inform the design process.

Do you feel there are some things you do unconventionally? If so what are they?

The process of reduction to this extent. 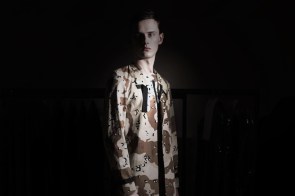 “Spring/Summer 2014 was about furthering the brand’s exploration into its key principles whilst introducing a new lightness.”

What are your current thoughts on fashion in Britain as well as globally?

The UK is in an interesting time with increased attention and the growing influential platform London Collections: Men and to be part of it is very stimulating.

The brand has a strong element of English influence within which comes from growing up in England and working on Savile Row though I have always viewed the brand as international and within an international context.

What was the approach for this latest collection?

Spring/Summer 2014 was about furthering the brand’s exploration into its key principles whilst introducing a new lightness. The fabrics are always paramount to the collection’s development and this season saw the use of water-repellent and over-dyed treated cottons, alongside double weave Japanese denim.

There was also the introduction of print using a six-way desert camouflage ripstop, something I believe to poses a masculinity, practicality and beauty in its appearance. The fabrics each represented the combination of modernity and tradition and through the various interpretations.

Alongside and almost contradicting the more fluid pattern of the camouflage were a series of graphic prints, each of which came from the same composition and through the removal and revelation of the three components produced three prints.

What are the plans for the label going forward?

We are working on numerous inter-seasonal projects alongside the main line, which itself will expand introducing new product categories.

Arguing that Confederate General Robert E. Lee “has nothing to do” with the county.
By Sophie Caraan/Oct 5, 2021
Oct 5, 2021
4 Comments
Fashion

A Closer Look at the FEIT Bio Trainer Black Suede

FEIT, a brand known for its stellar handmade boots and footwear, recently branched out into
By James Shorrock/Mar 19, 2014
Mar 19, 2014
0 Comments
Entertainment

Here’s the first official trailer for the upcoming sci-fi blockbuster The Maze Runner. Based on the
By Nate Bodansky/Mar 19, 2014
Mar 19, 2014
0 Comments
Music

After first revealing plans to branch out into the coffee business, socially-conscious footwear
By Nate Bodansky/Mar 19, 2014
Mar 19, 2014
0 Comments
Automotive

Porsche has just unveiled the new GTS versions of its Cayman and Boxster models. Based on the
By James Shorrock/Mar 19, 2014
Mar 19, 2014
0 Comments
Music

With spring looming just around the corner, Carhartt WIP returns with a trio of new outerwear
By Jonathan Poh/Mar 19, 2014
Mar 19, 2014
0 Comments
Footwear Fashion

A Closer Look at the Saucony Shadow 6000 Grey/Red