Exploring the Potential
of K-food with bibigo
Fermented foods have been a staple in Korea throughout its history. Korean “jang” (Korean fermented sauce) is left in a pot for several months to years to silently ferment before waiting for the right moment to come out, which is why making genuine fermented K-sauces is trickier than any other food. You cannot predict how it will taste, as its flavor heavily depends on many variables including the quality of ingredients, kinds of microbes at work, surrounding environment and fermentation period. Jang is truly the result of collaboration between man, nature and microorganisms. So how can these dynamic and diverse flavors be shared beyond Korea? We visited a man who can answer this question.
Mushrooms, persimmons and fish are hung in the air to dry, while the aroma of fermented ganjang (soy sauce) and gochujang (red chili paste) fills the entire space. A man in apron bustles around the dimly-lit kitchen. With long, thick hair in a ponytail and a straight face, he skillfully wields his different tools. He is Chef Doyun Kim of Yunseoul, a modern K-food restaurant based on traditional fermentation. 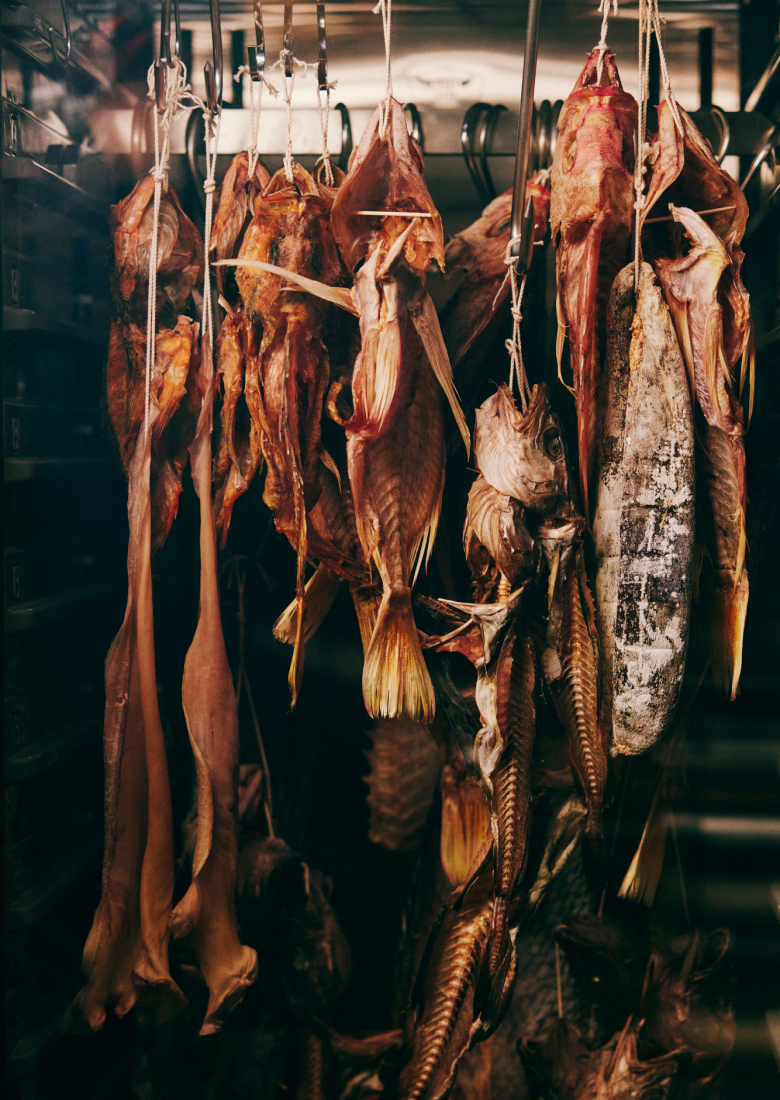 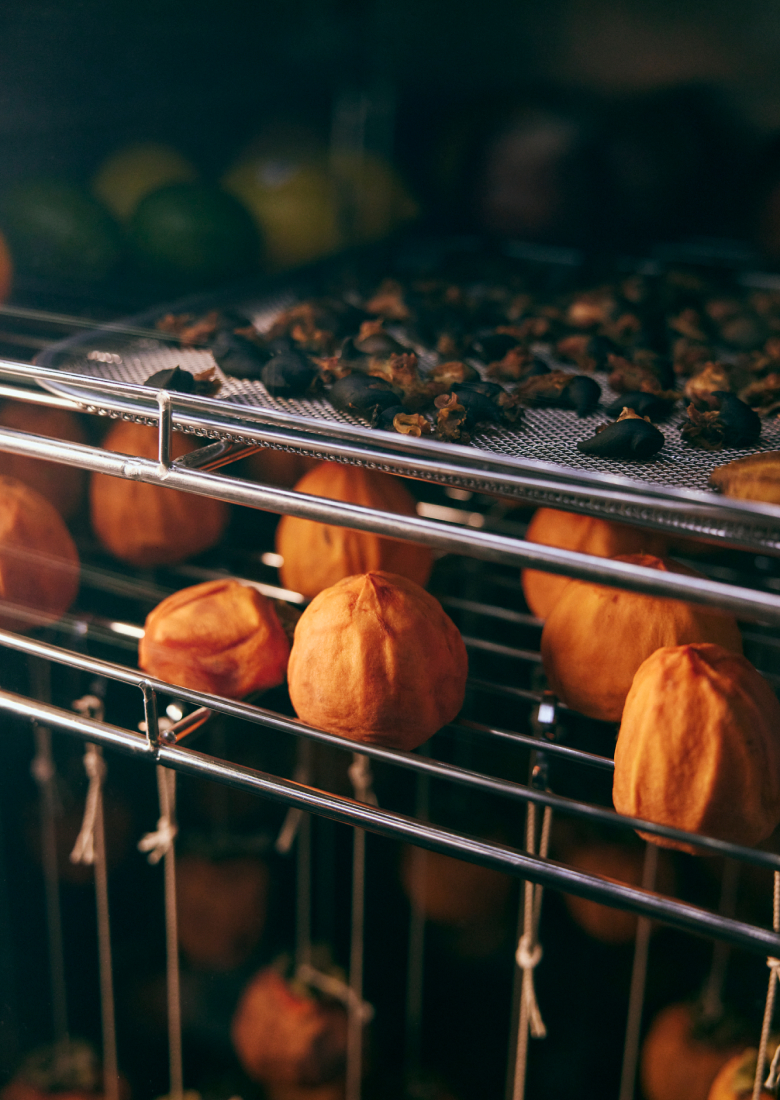 Chef Kim provides the best room and board for microorganisms, and in exchange they add unique taste, aroma and nutrients to his dishes. With 31 years of culinary experience, Chef Kim settled on cooking Korean cuisine by measuring with “one pinch and two big tablespoons”, despite being used to preparing Japanese and French dishes where utmost accuracy is of the essence. His goal is to systematize the traditional flavors of Korean foods. “All ingredients have their own fermentation thresholds, at which point they provide the best flavor. The ‘savory peak’, so to speak. I will find them and put them together.”
During fermentation and aging, the ingredients taste different at every moment until they achieve perfection. The smell goes away and the deep flavor the chef is seeking comes out, deepening its savoriness. To pinpoint this moment and minimize errors, Chef Kim has practiced over and over for the last 30 years. “I cook as if I will see it through to completion. There is no such thing as 100% when it comes to cooking, but I can still work towards that.”
Although chemical additives can quickly mimic the taste of fermented food, they do not replicate their deep, savory flavor. They also make diners feel thirsty and heavy in the stomach. Chef Kim is slow and patient when it comes to fermenting ingredients. He balances the taste of jang by putting boiled pumpkins, pears, apples and Taean Jayoem (boiled salt), and dry ages seafood in storage with temperatures set between two and five degrees Celsius. He also makes stock with scallops dried for 200 days and serves Chinese peppers pickled five years ago, as he knows that deep flavors are achieved with time.

“You can earn a special flavor when you take time in fermenting ingredients.” 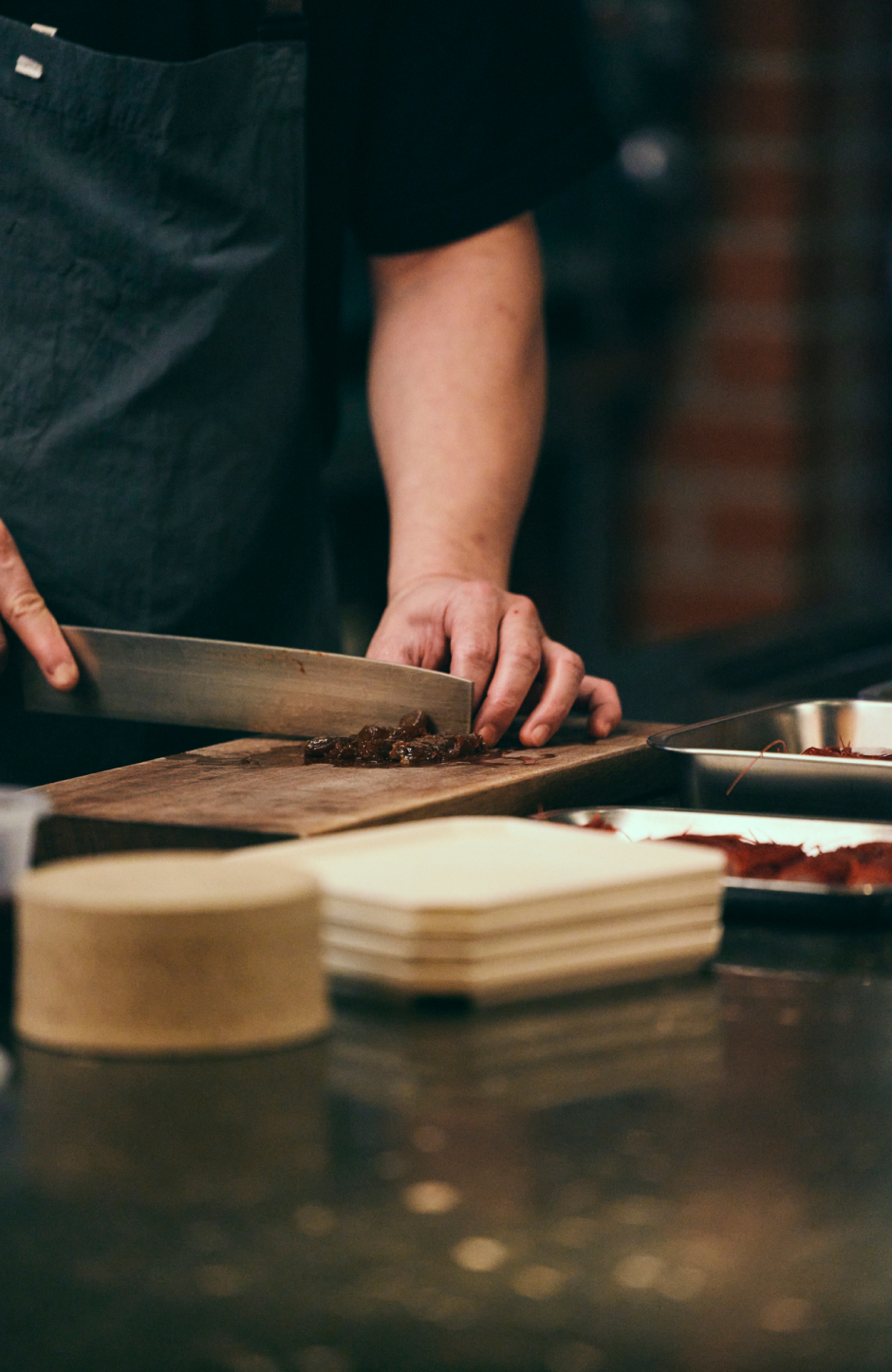 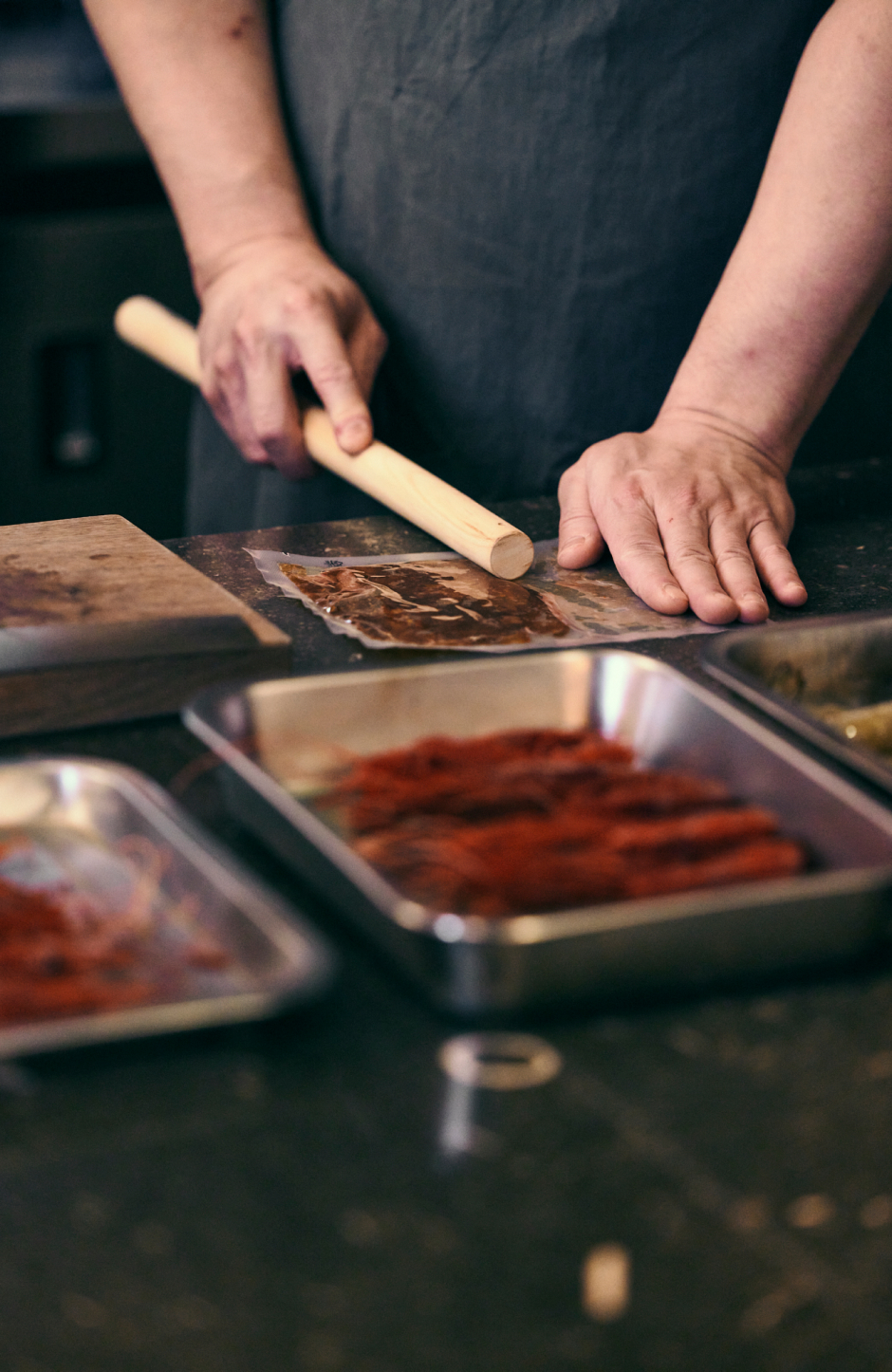 “Well-aged fish has its unique savory flavor and texture. When dry-aged, soft white fish turns chewy which is suitable for a steak, while sticky eel turns crunchy. When left for another four to five months, fish bones become a good ingredient for soup.” The savory flavor of each ingredient reaches its peak after dry-aging, which slowly dries out the skin to make it chewier and also gets rid of smells. When boiled again after dry-aging, seafood also develops a different texture. You can taste the four different seasons from the deep seafood stock. 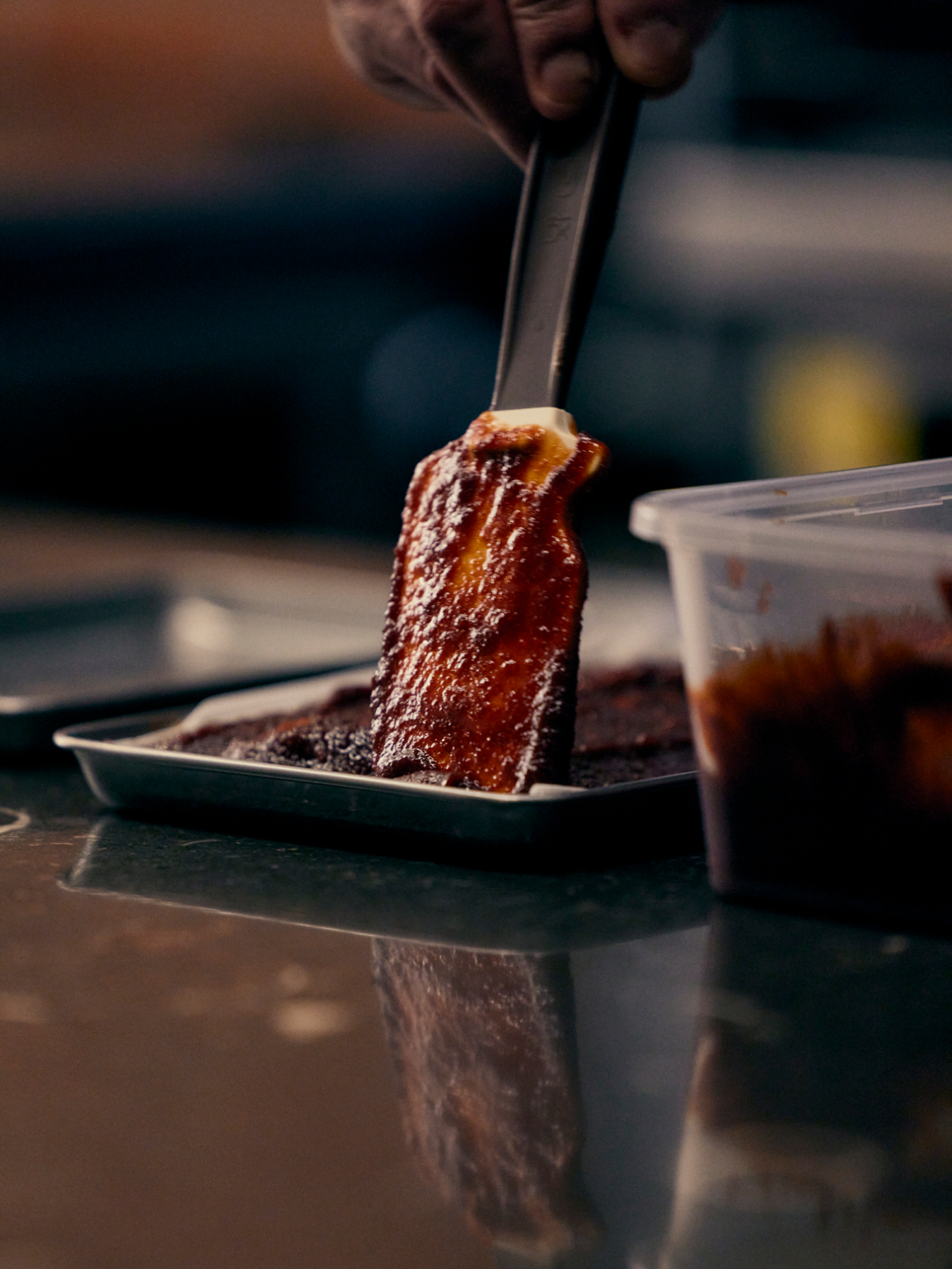 Fermentation is where Korean ancestors used to store food for long periods of time, but Chef Kim boldly abandons the concept. Rather, he reinterprets it with a modern twist. “There was no cold storage technology at the time. But now, you can ferment and dry-age ingredients in storage based on data. Hand-made food is good, but a more scientific approach is required for fermented food.” How much closer is Korean food to science now, when it used to be 100% hand-made? Before opening his restaurant, Chef Kim traveled around the world in search of good ingredients while working in Japan and other countries. After opening Yunseoul, he still makes long-term business trips to France, Turkey and New York. We asked him where he thought K-food stood globally.
With no flavor, only taste and texture remain. This is why Chef Kim wants to cook in a way that draws the best flavor out of each ingredient, and that is mostly achieved through fermentation. Fermented jang has its unique blend of sourness, sweetness and savoriness on top of its salty taste. 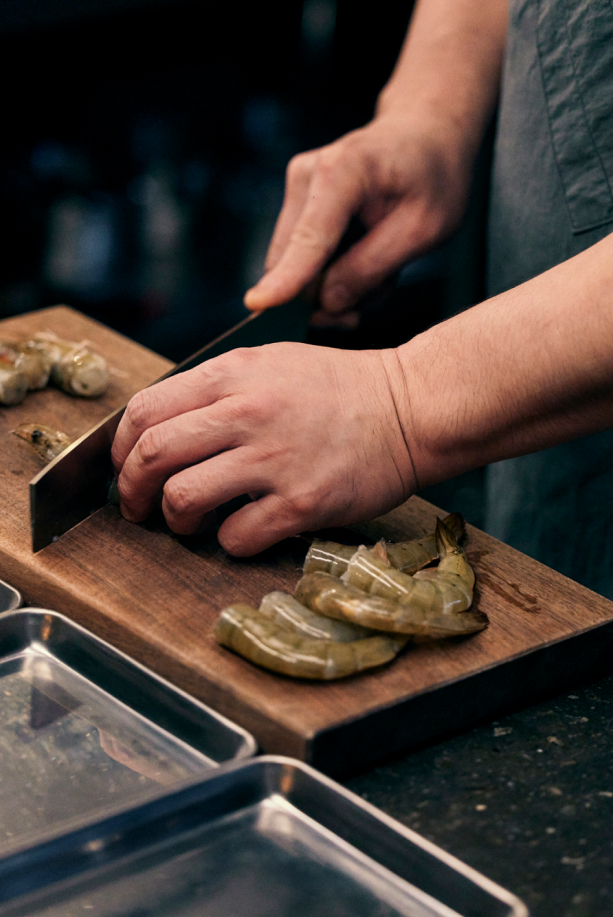 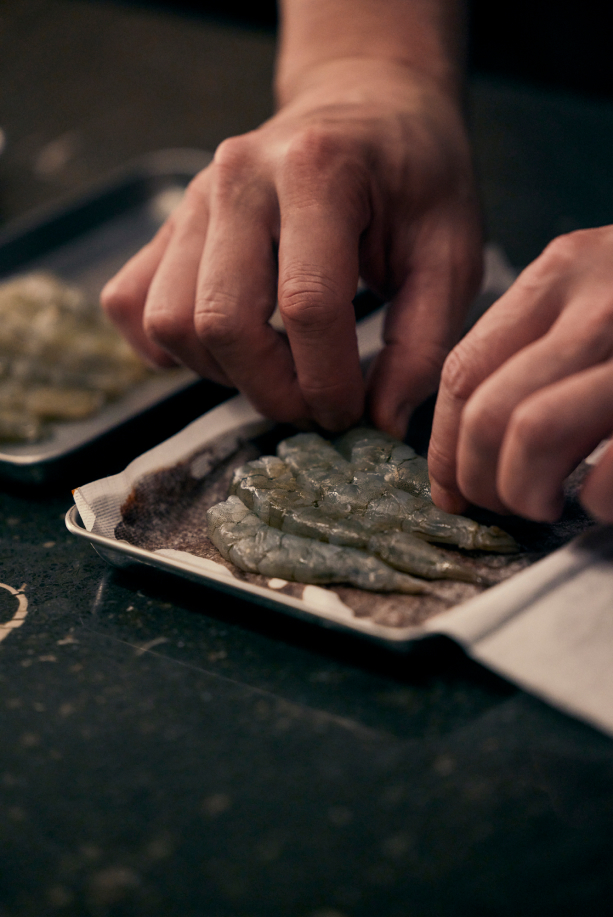 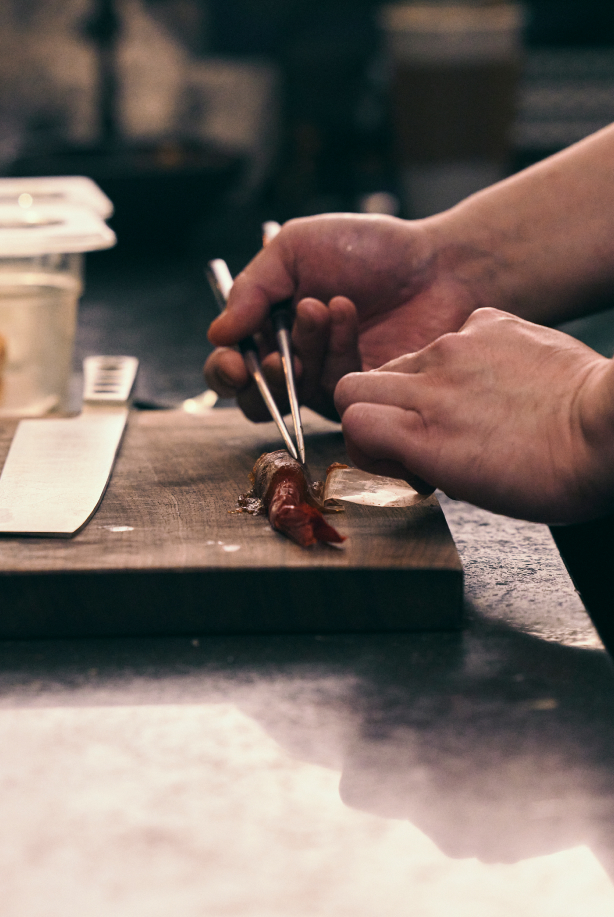 “We have to eat with all five senses, so it is hard to call something with only taste and texture ‘food’. After all, it is flavor that completes cooking.” 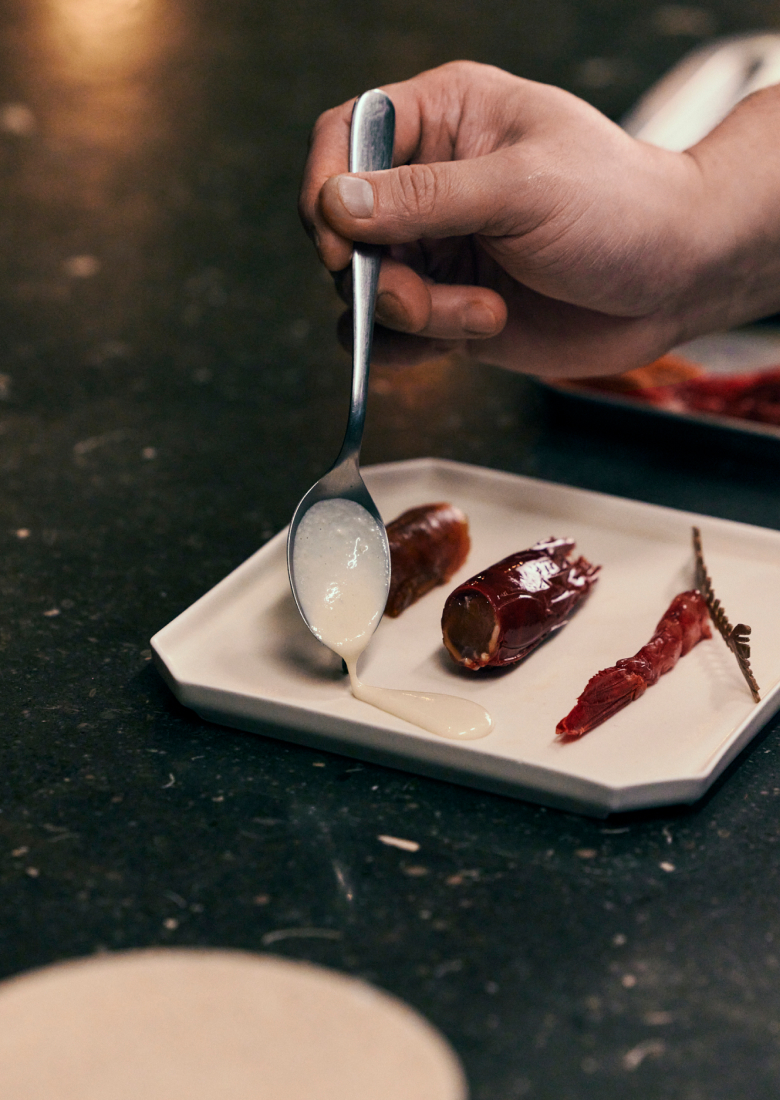 Chefs not only plan and cook, but also oversee the entire kitchen process. Chef Kim defines the qualities of a good chef as: “A good chef does not get angry while cooking, because the bad energy gets into the food.” Whenever his staff makes a mistake, Chef Kim limits his warning to just once because repeated admonishment may hurt the feelings of everyone involved.
“Understanding ingredients is the second must-have quality.” A good chef knows the environments that produce good ingredients. Chef Kim visits these places to observe how the ingredients are grown and harvested. That way he can perceive whether his dishes have the original aroma of the ingredients after fermentation and dry-aging.
“A good aroma is not something men can create. We need to discover that hidden within each ingredient.”
“I find it hard to cook Korean dishes during overseas business trips because of the lack of ingredients. So I would bring gochujang and anchovy stock from Korea to cook with foreign ingredients.” bibigo made K-sauces more easily accessible in order to share Korean flavors abroad. bibigo’s GOTCHU is a thin gochujang, or chili pepper sauce, that can be easily added to toasts or sandwiches like a hot sauce.
As a good starting point to Korean fermented food for K-food beginners, GOTCHU adds a new dimension to any food they enjoy without overpowering it. It is an authentic fermented Korean sauce with no preservatives or artificial sweeteners. We wondered about Chef Kim’s view on this: “It is a good way to introduce gochujang to those who have not tasted it before. It would also be more natural and acceptable to them as they can just add the sauce to their daily meals rather than tasting a full Korean dish.” 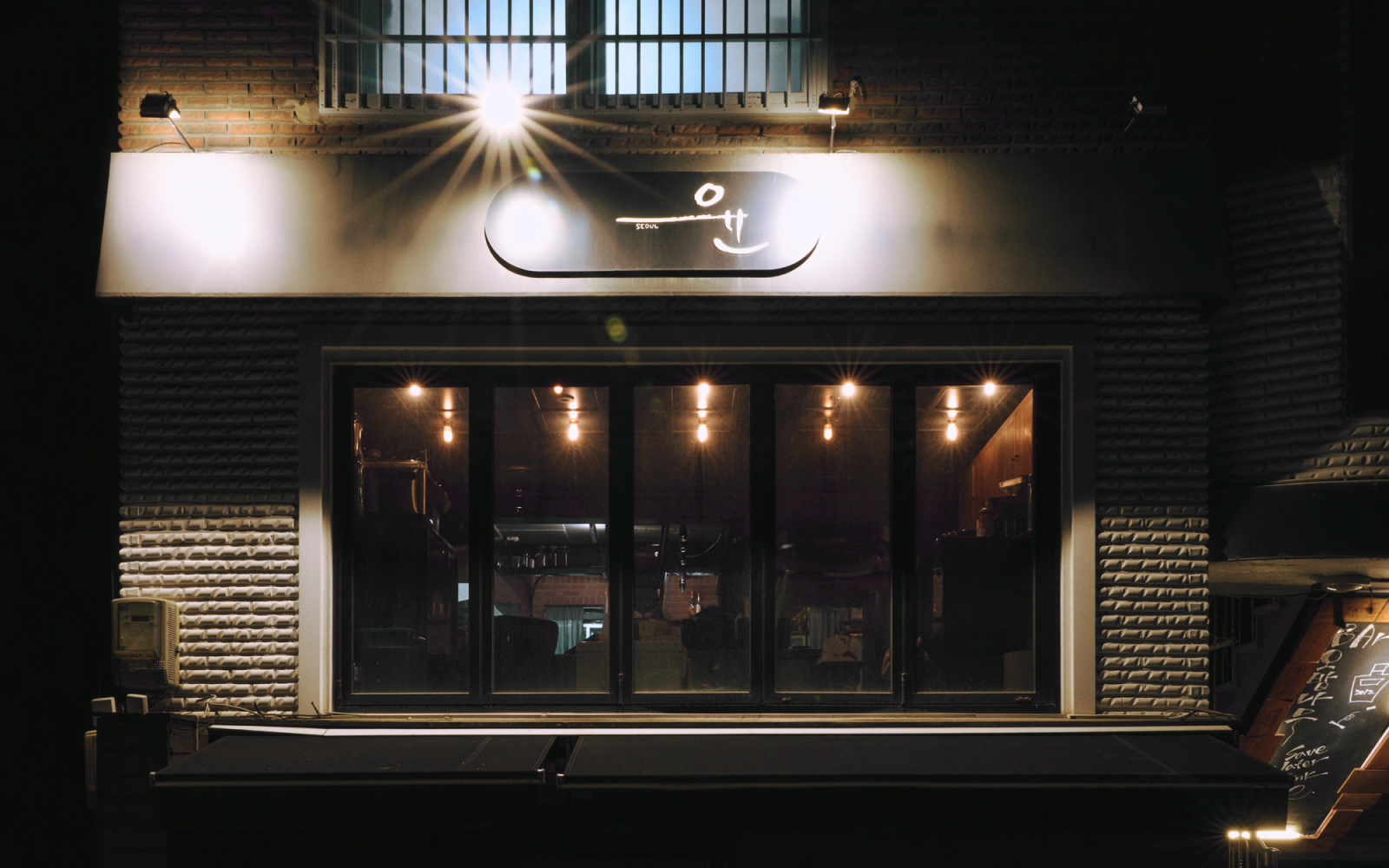 Chef Kim and microorganisms make the perfect team for fermented and dry-aged foods. Famed for drawing the deepest flavors from each ingredient, they make jang full of savory essence. Fermentation helps the ingredients to reach their savory peak, while Chef Kim brings Korean jang to its completion point. As K-sauces make their way to the deepest flavors through fermentation, their journey to the world will be led by bibigo’s GOTCHU hot sauce.
Presented by bibigo
Credits Photographer Injun Park Videographer Saccharin Film Contributing Editor Seohyung Jo
Read Full Article

Explore the "Trees of Finland" With KARHU This Fall

RTFKT Ventures Into the Real World With Cryptokicks iRL Sneaker

With everything from multicolored outerwear to contemporary suiting.
By Brycen Saunders/Dec 5, 2022
Dec 5, 2022
0 Comments
Footwear

‘Fortnite’ Ushers In Chapter 4 With New Island, Weapons and Dirtbikes