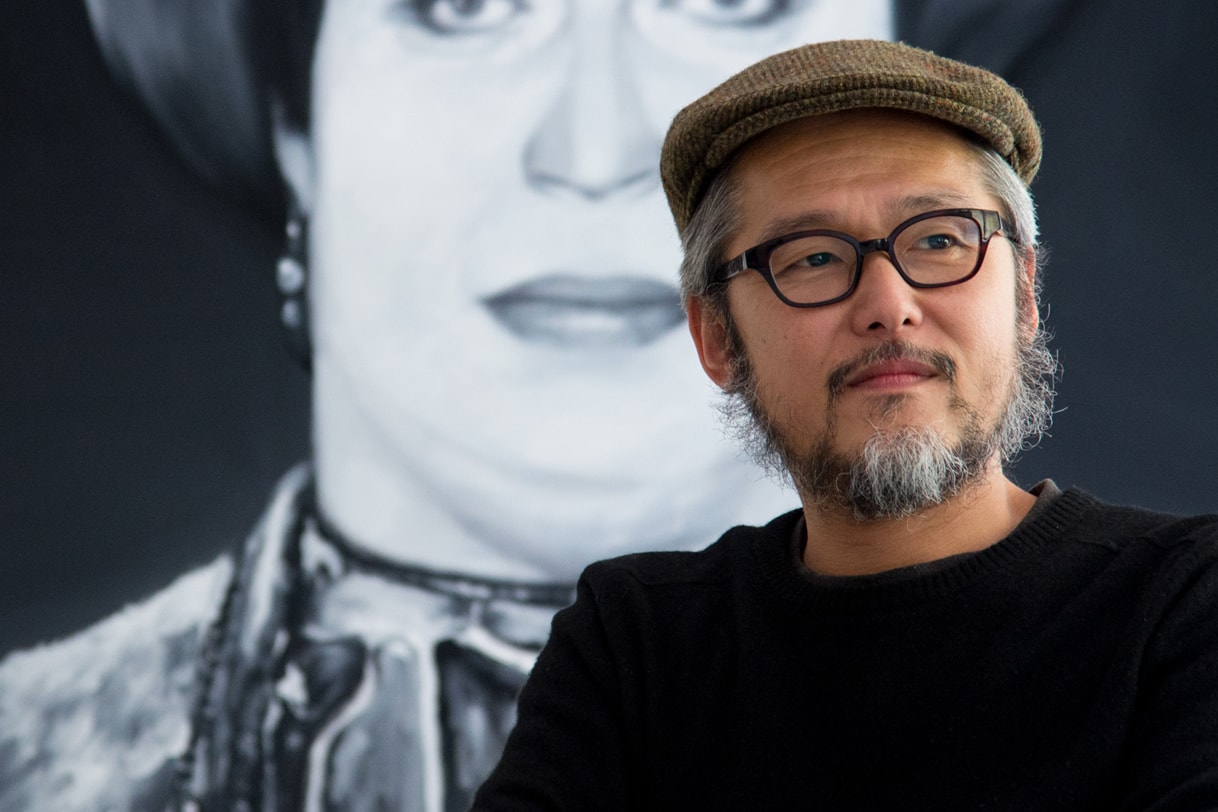 The Surreal Paintings of Tomoo Gokita Inspired by Vintage Playboys
An honest conversation with the Japanese artist whose work has no intended meaning.
By Nirvana Garreffa

Where traditional art has spent hundreds of years coming to a refined balance of aesthetic and concept, conceptual art emerged as a sort of protest. It placed concept above all, with a major disregard for material and appearance. Think Marcel Duchamp and Jenny Holzer.

Tomoo Gokita’s art however, is unlike either of these.

Since labels help people understand the things they’re looking at, critics have called Gokita’s work Post-Conceptual — perhaps the most suiting genre since his paintings have no attributed meaning, aim to change no one’s minds about anything, and are not intended to make the viewers feel any particular way. This is something the artist has been entirely honest in acknowledging. When asked about it, he’ll tell you “people should be able to look at the work and feel or think whatever they like about it.” 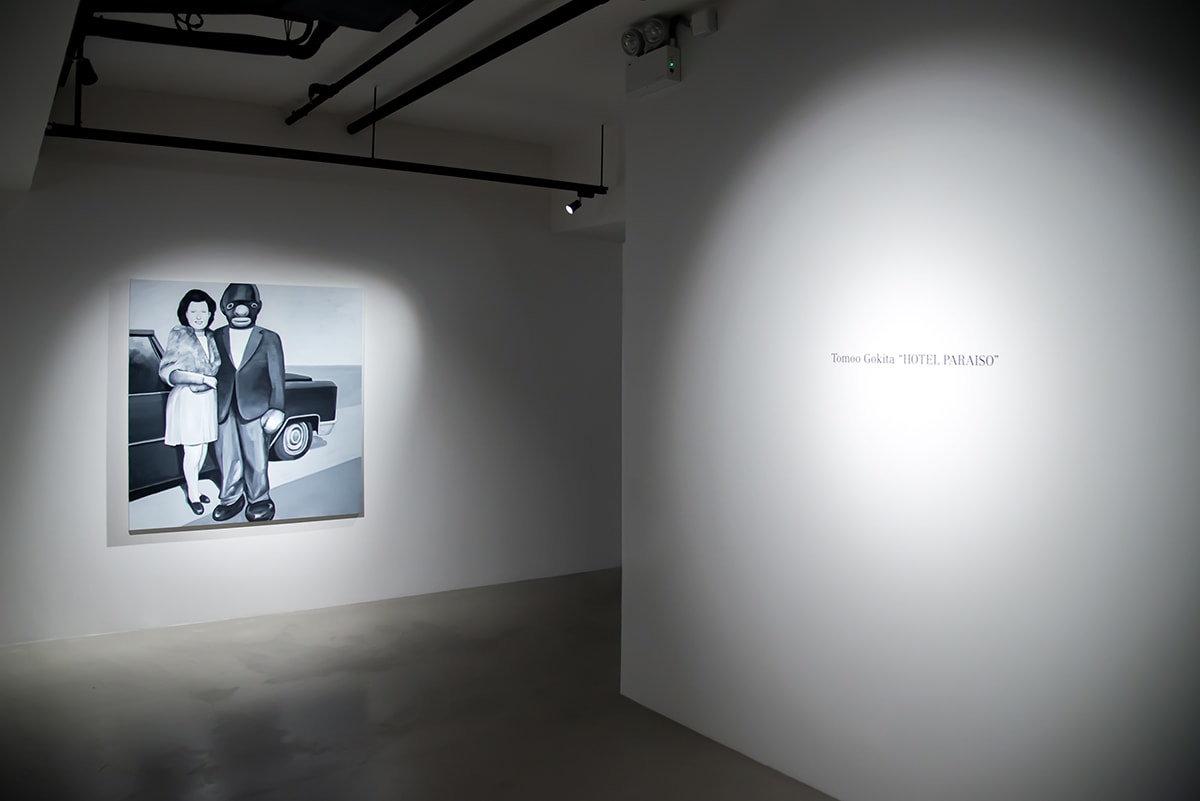 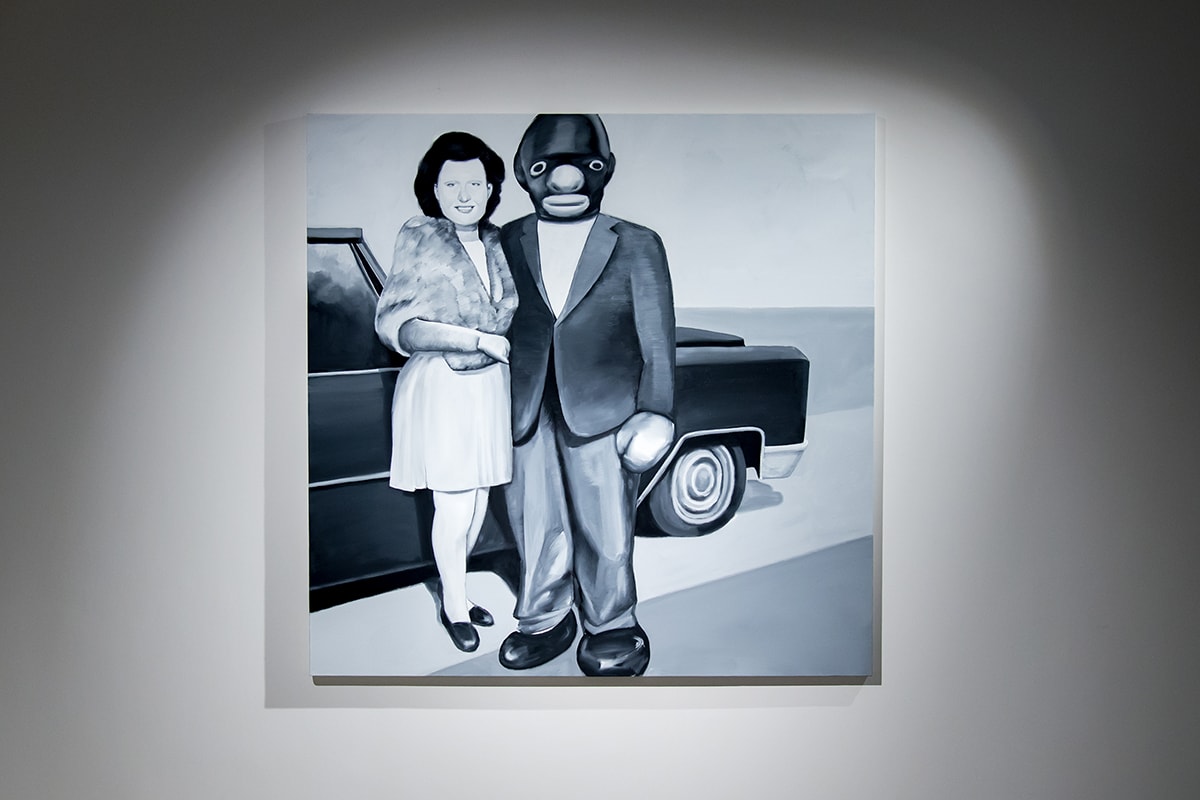 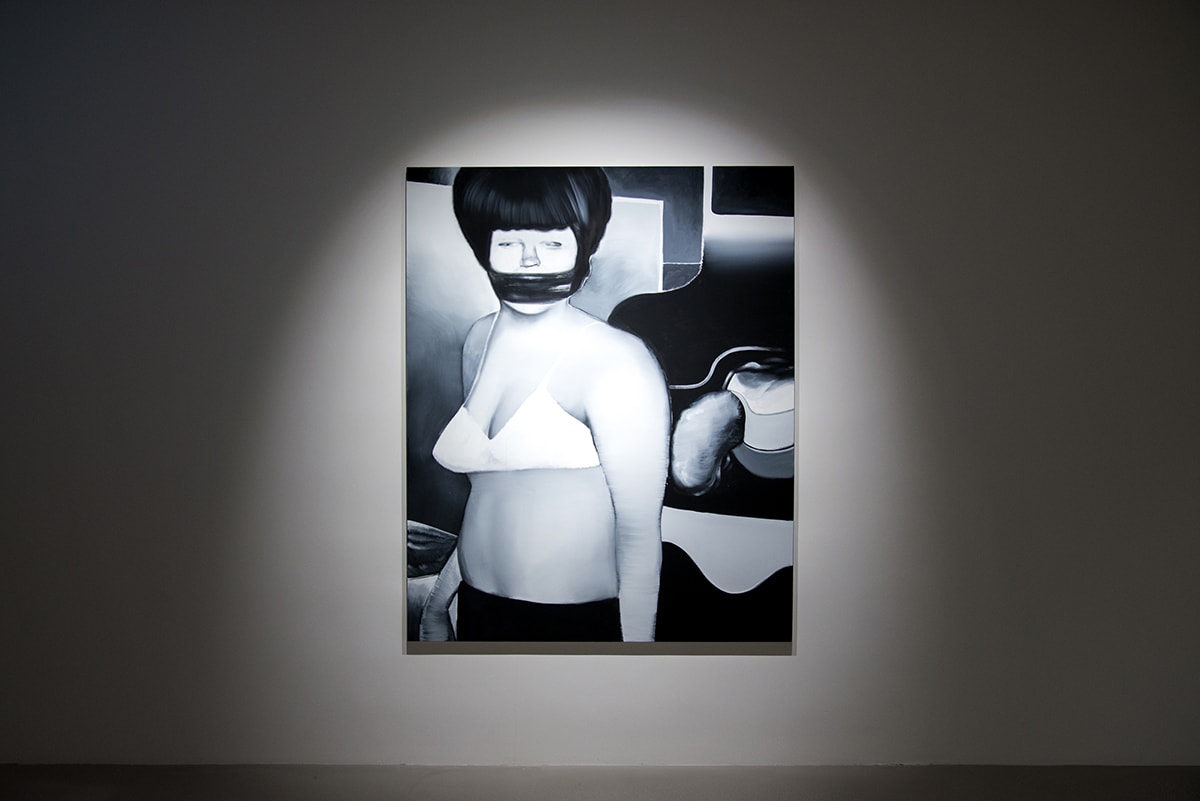 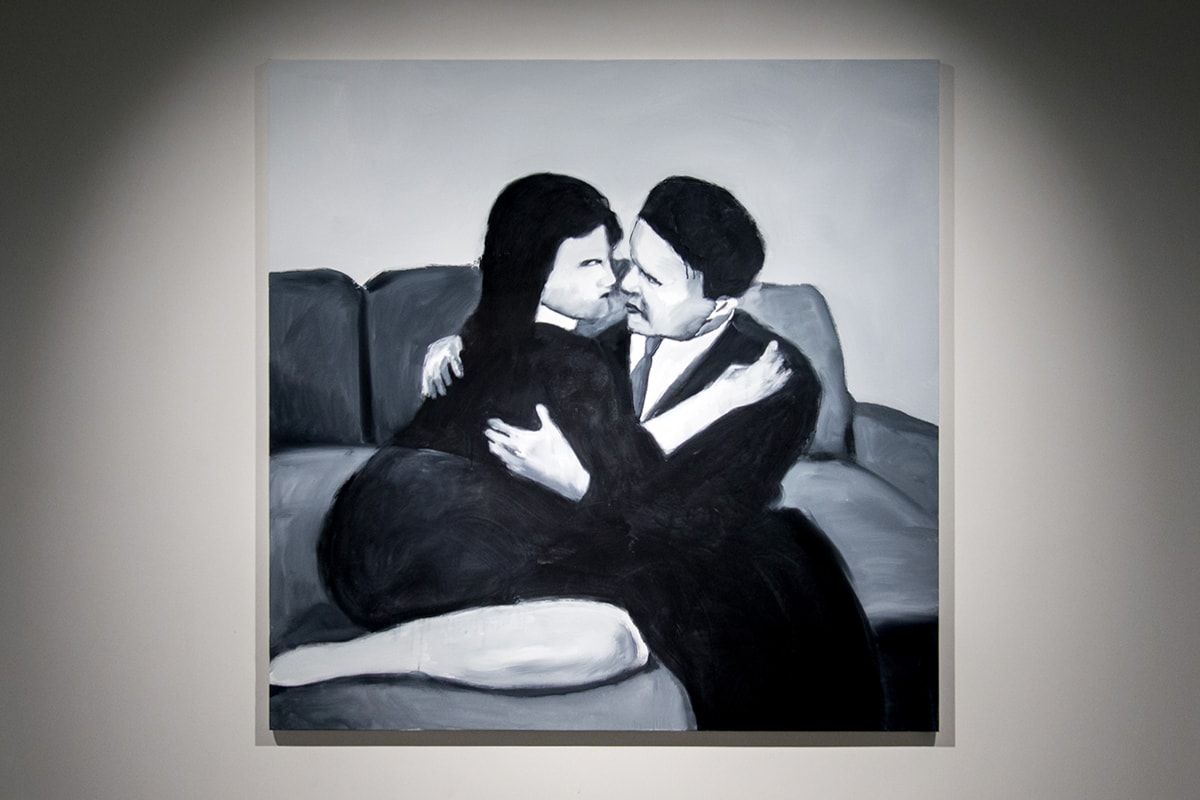 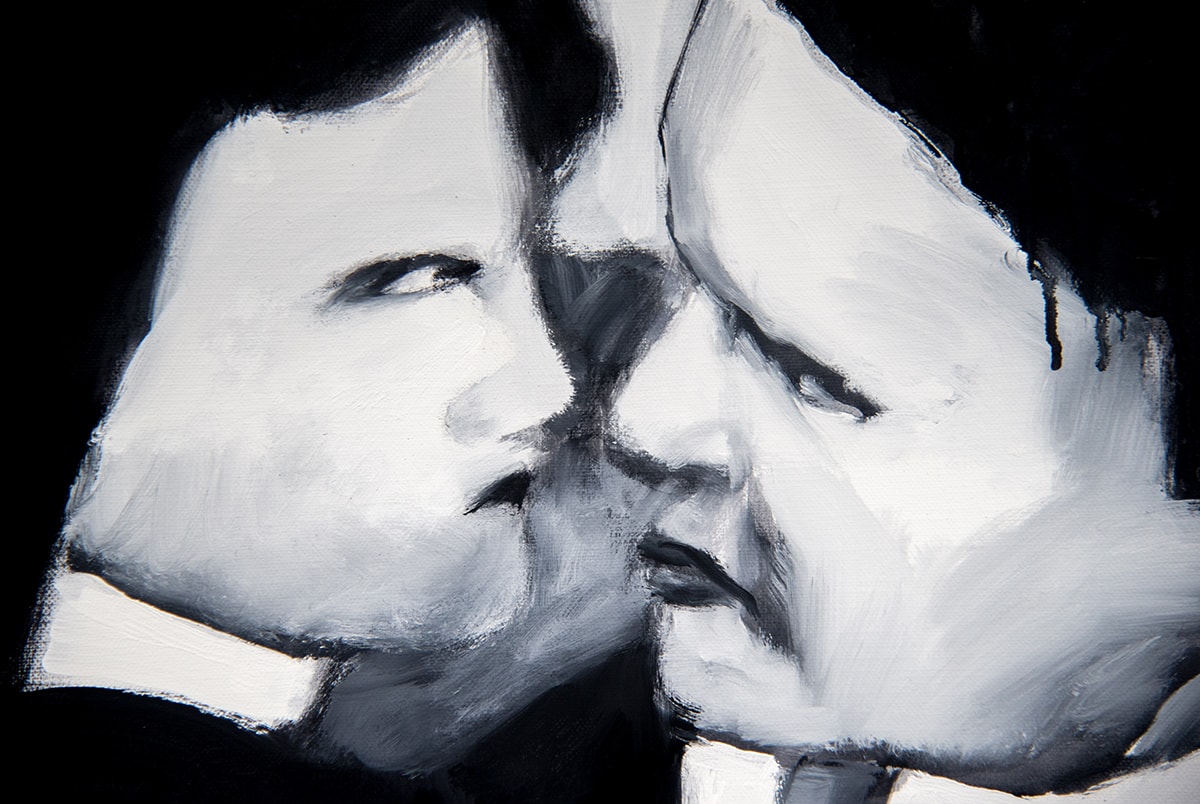 This continues to be the case with the artist’s latest exhibit, “HOTEL PARAISO” at the McNamara Art Projects in Hong Kong. Upon walking into the space, the first image guests are met with is a black and white painting of a smiling couple in front of their car. In traditional Gokita style, the painting is black and white, and the man is disfigured; his face resembling a childhood toy with cartoonishly proportioned features that look as though they could be rearranged.

[The show] paints a narrative of a fictional tourist destination and the unique guests passing through it.

The name “HOTEL PARAISO” references an actual hotel Gokita once stayed at while travelling to Mexico. Though the show isn’t a direct tribute to the place, it does paint a narrative of a fictional tourist destination and the unique guests passing through it. The scenery is often rendered in great detail, while a handful of faces have been reduced to abstract shapes. Compositions have been strategically framed, while the subjects often exchange mysterious glances, leaving the viewers guessing about what could be happening or what is about to happen.

“Paraiso” also alludes to a 1978 tropical jazz album of the same name by Haruomi Hosono and the Yellow Magic Band, something which after speaking to Gokita, begins to make a lot of sense. The artist has a close relationship to music, finding inspiration through both sound and sight. He often finds himself spending hours at a time sifting through album covers in record shops for inspiration. As we continue to talk about his life’s path leading up until now, it seems that his affinity for music has been a constant for him, helping to guide his career into the creative industry as a graphic designer before transitioning into fine art. 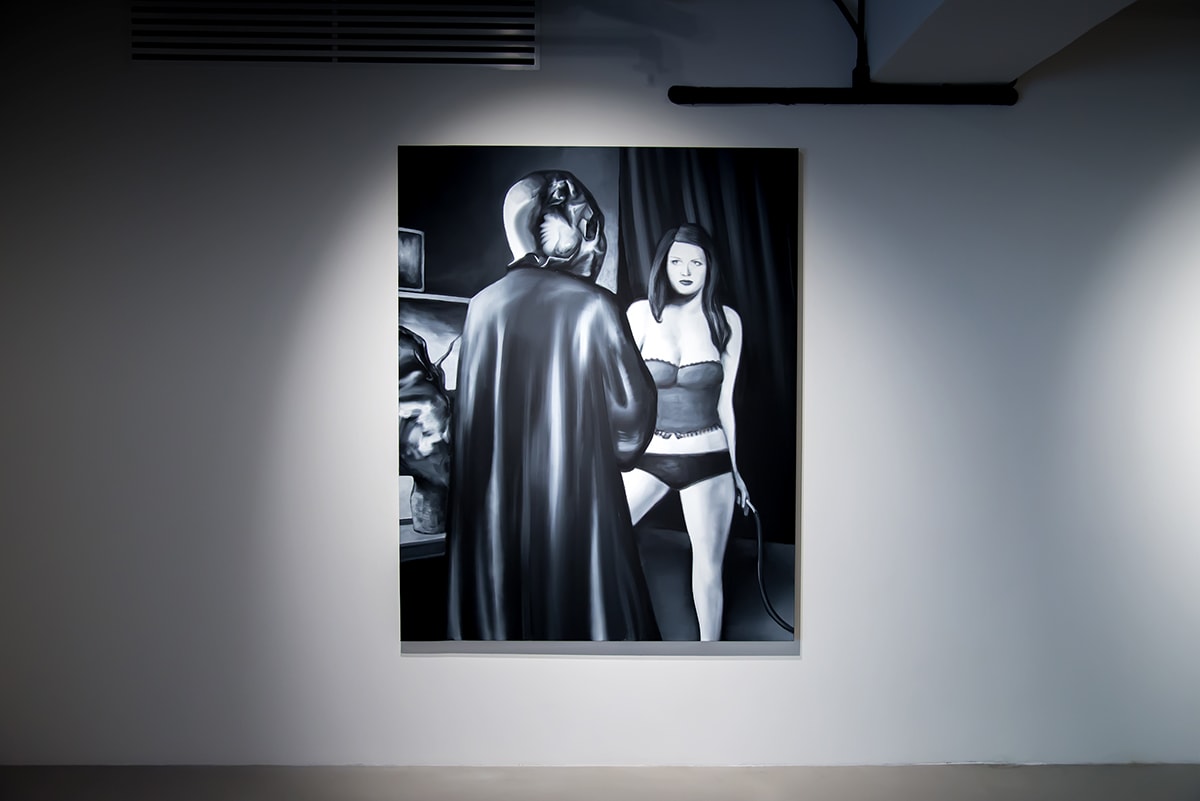 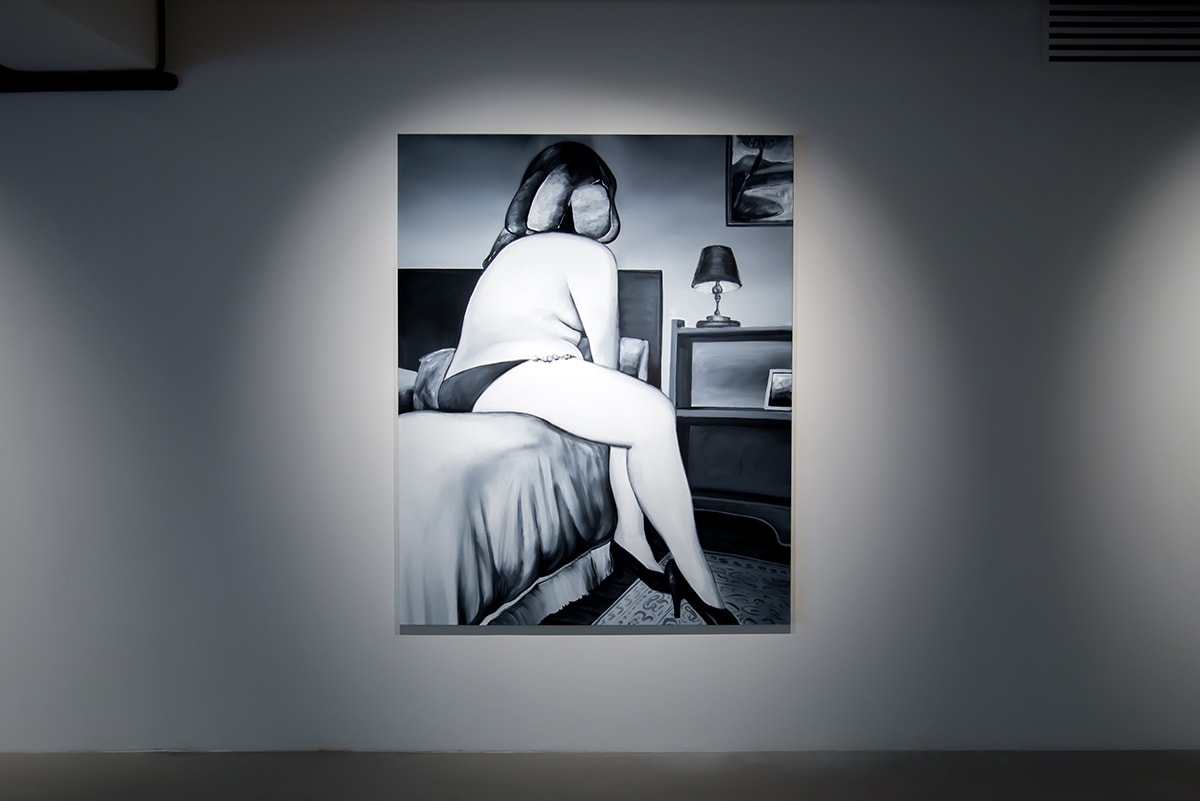 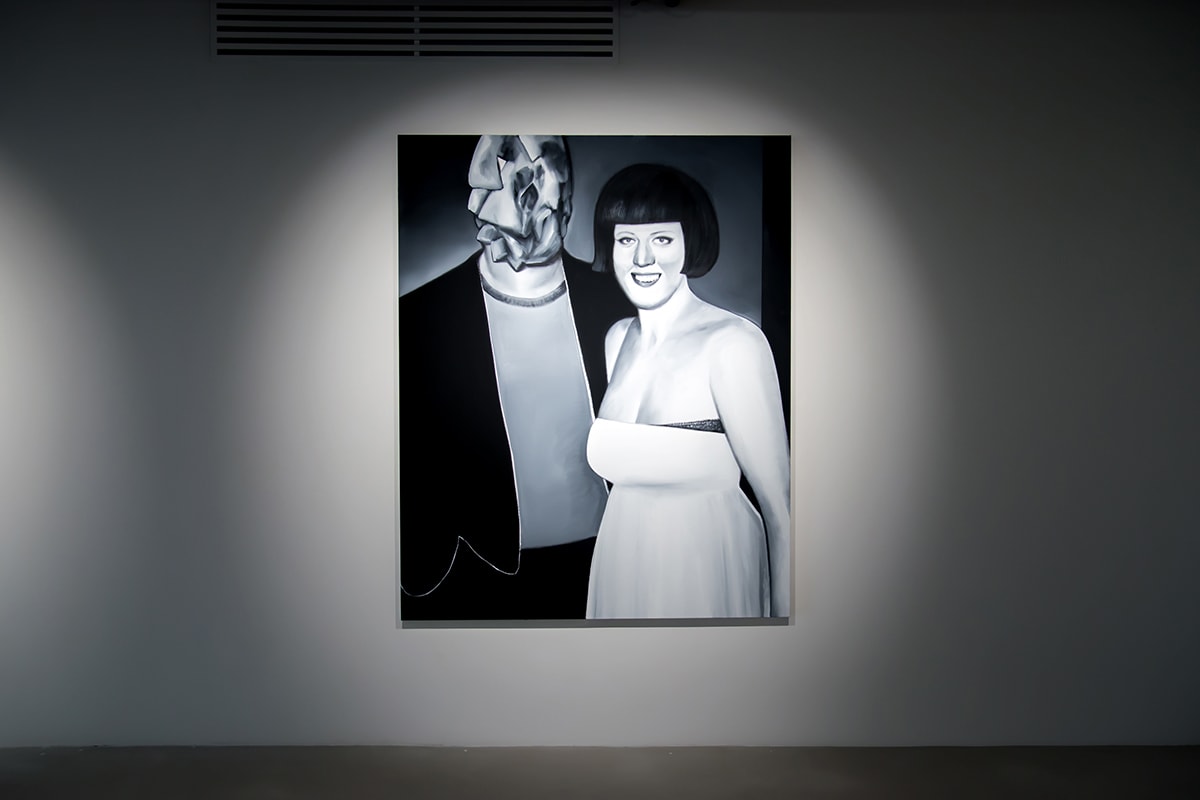 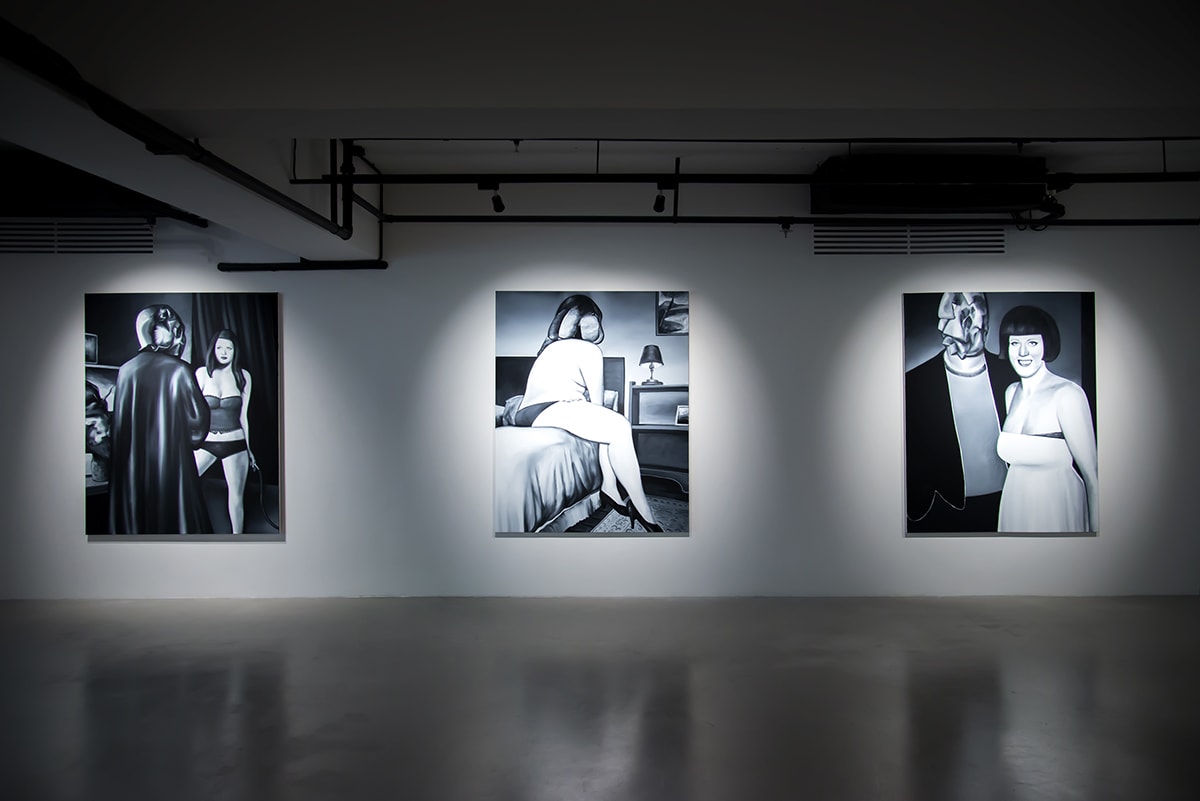 Gokita says he is grateful for having such an open-minded father, who regularly left copies of [Playboy] magazine around the house for him to look at.

Unlike many creatives, Tomoo was brought up in a household supportive of the arts. His mother encouraged him to pursue his goals, while his father who worked as a designer for Playboy’s printed advertisements and once worked with Nobuyoshi Araki gave him all the material he’d need to be on his way. Gokita says he is grateful for having such an open-minded father, who regularly left copies of the magazine around the house for him to look at — something which he particularly enjoyed. Who could blame him? The full-bodied, pin-up style women seemed to have made a lasting impression on the artist, and inspired the uniquely erotic tone that has underlined much of his work. He laughs, but he openly admits it’s why all the women he paints are rather busty.

After graduating from a modest art college, Gokita followed in his father’s footsteps and began working as a graphic designer, sometimes turning out nightclub flyers for American noise bands. What seemed like a practical means to a creative life actually became exhausting for him — he found himself repeatedly tested by the politics, lengthy meetings, and revisions involved in the formal process. It’d be satisfying to say there was a distinct turning point, where he decidedly upped and left his job, but he explains that there wasn’t. Rather his transition into art was a steady, natural, and at times difficult one. 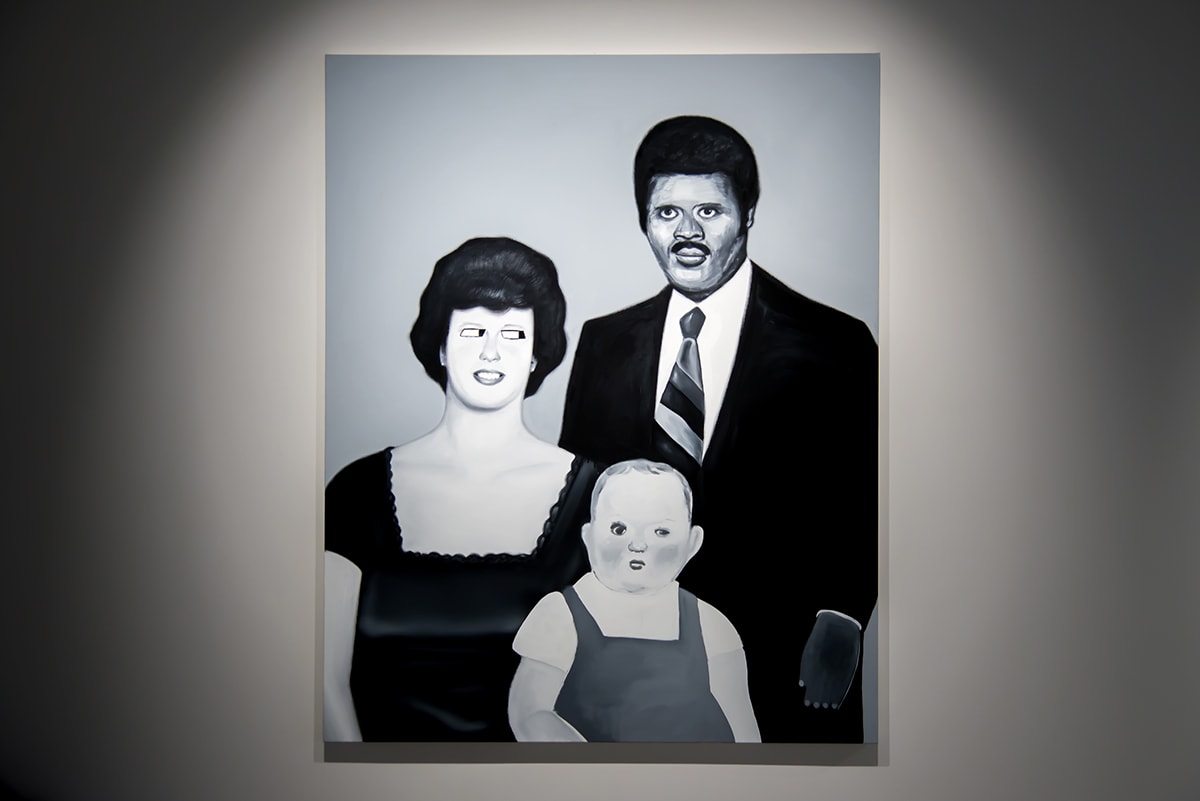 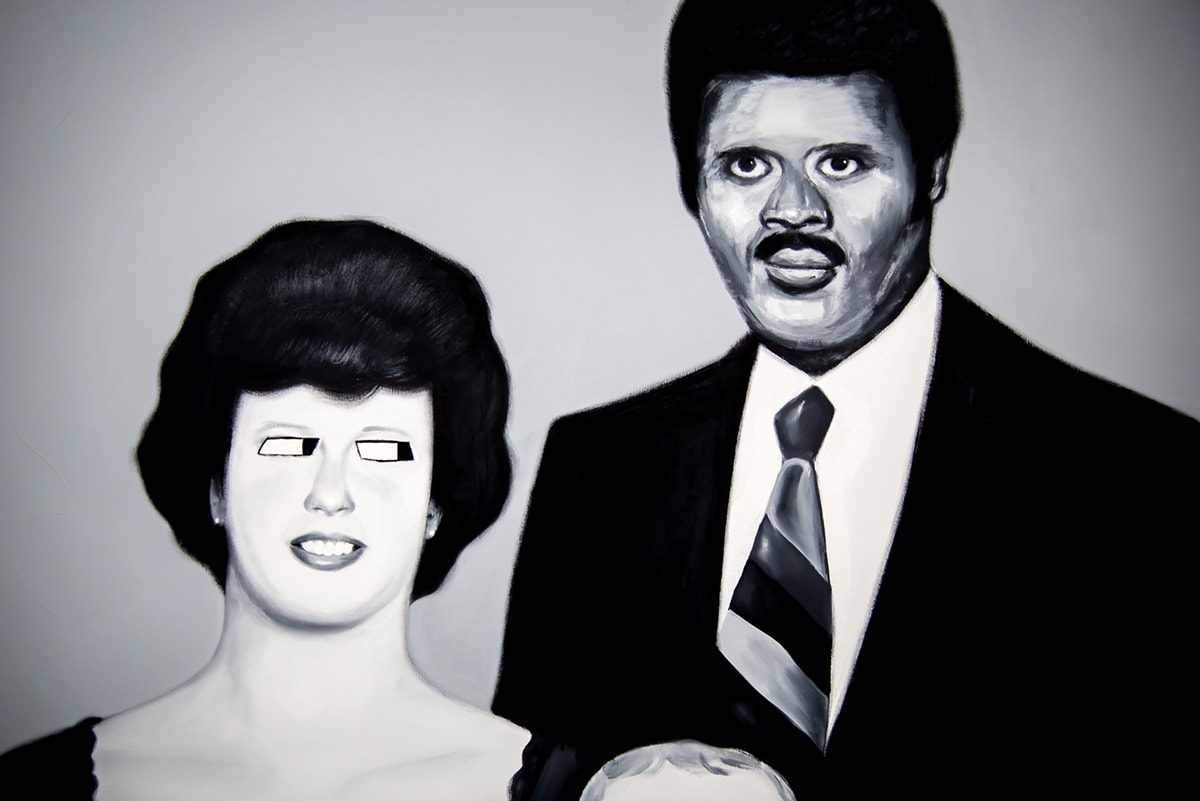 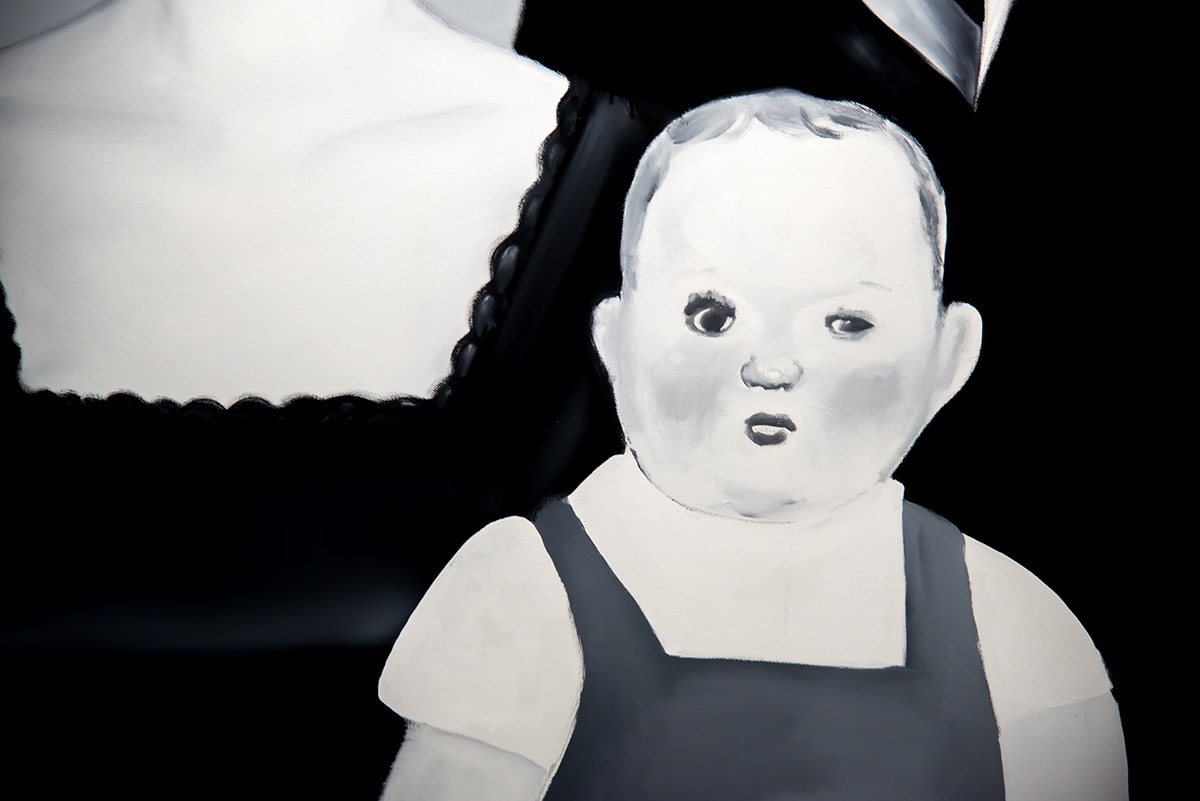 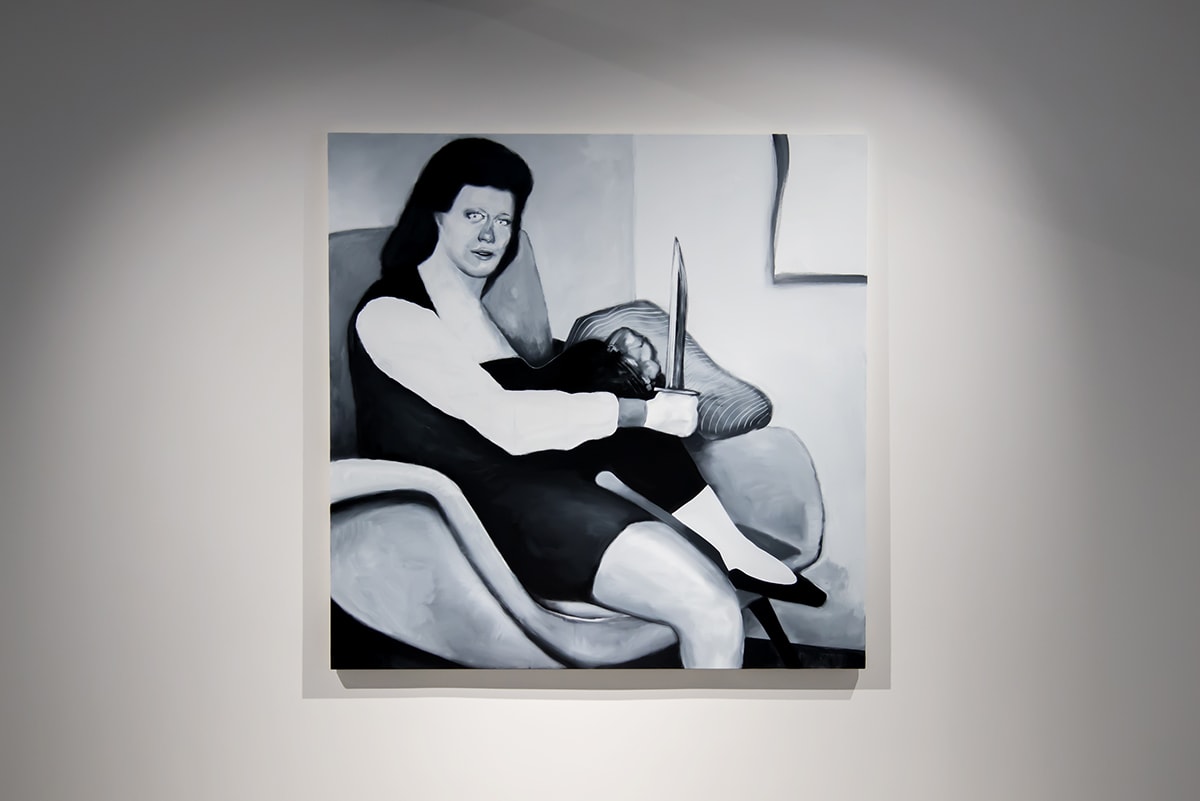 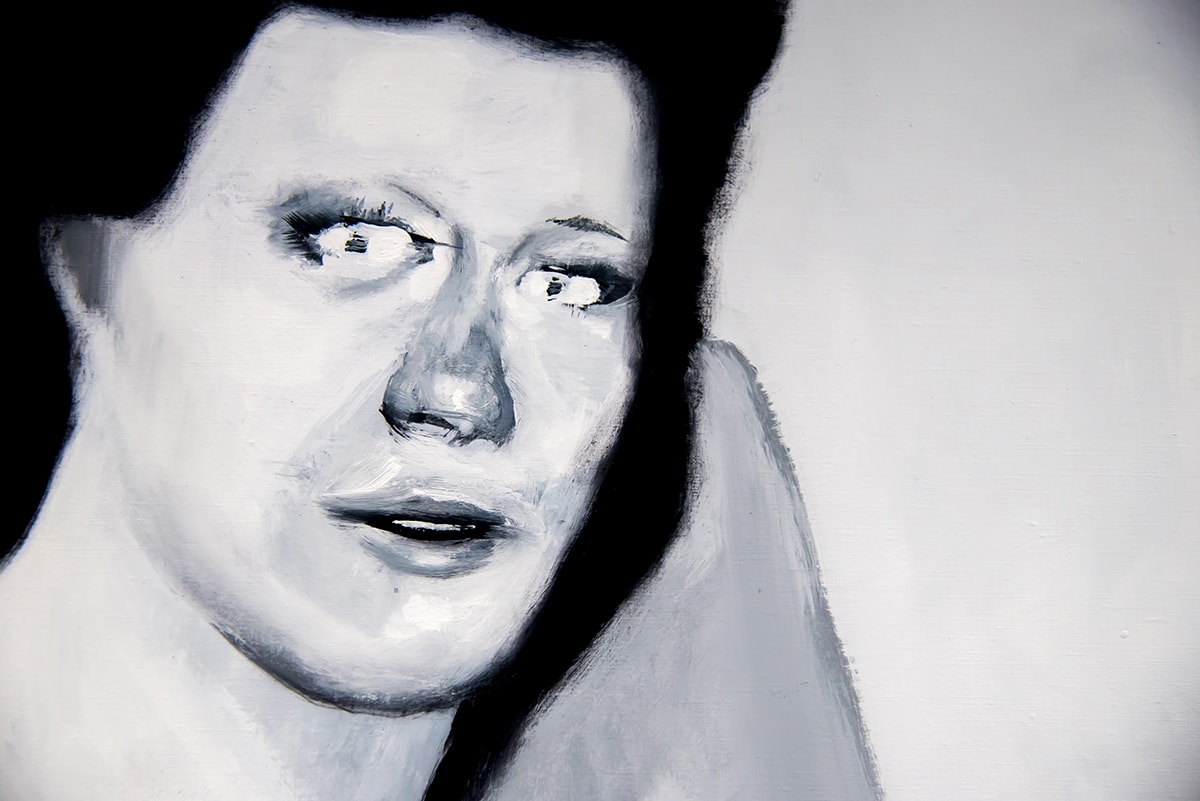 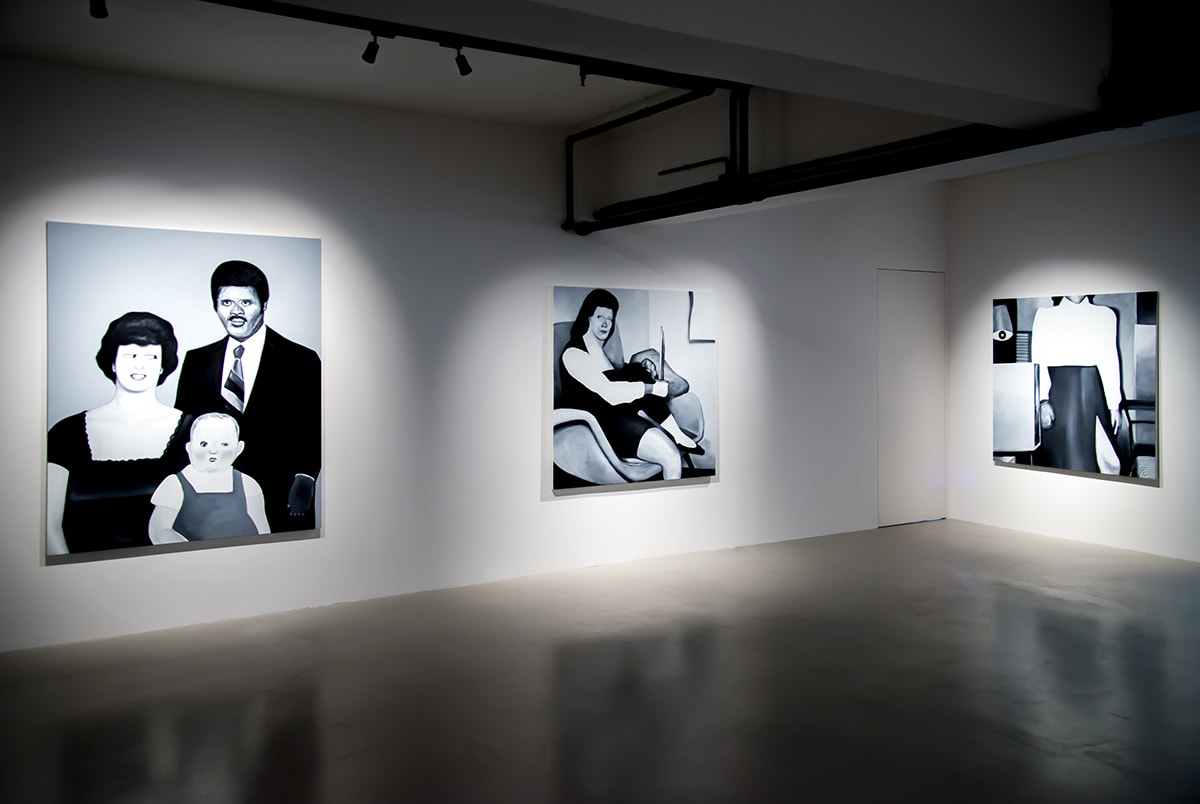 “I’m not trying to make people uncomfortable…[and] a lot of painters around the world have painted people without faces, I don’t feel like I’m making anything new.”

While designing, Gokita dedicated a generous number of hours to drawing in his spare time, it had become therapeutic for him to have creative freedom within the pages of his own sketchbooks. After amassing such a large collection, friends had praised him for his unique style and encouraged him to print a book with Japanese publishing house, Little More, which eventually made a deal with him. Shortly after, 3000 copies of Lingerie Wrestling were released, complete with charcoal fingerprint smudges on page corners, offering a candid look into the budding artist’s personal work.

Today his book has reached cult classic status amongst fans and is valued between $300-$400 USD. It also serves as an important monument to his career, having segwayed him into unexpected opportunities. When Lingerie Wrestling eventually found its way to the New York MoMa bookstore, it landed in the hands of artist, Taylor McKimens who loved it so much he invited Gokita to partake in a group show in Chelsea. This lead to more opportunities in the US, including a solo show at the Onor Fraser Gallery in LA where, it grabbed the attention of Stussy’s creative director. What followed was their somewhat unlikely and unexpected capsule collection to happen in 2016.

By the end of our conversation, Tomoo is reclined in his seat and smiling. His answers have been brief, honest, and at times confusing until they’ve had time to sink in. I ask if he means for his work to be disturbing since many people find it to be, but he says “No, I’m not trying to make people uncomfortable…a lot of painters around the world have painted people without faces, I don’t feel like I’m making anything new.” It’s been refreshing to hear he in no way tries to over-glorify or embed a meaning in his work. He admits it means nothing, and that he’s not entirely original; he simply paints the way he does because he likes to. There’s no intention, just an image. You “go with the flow” while you look at it, just as he’s done his whole career.