When Kyrie Irving was drafted by the Cleveland Cavaliers with the first pick of the 2011 NBA draft it didn’t surprise anyone, but with injuries sidelining him during most of his brief collegiate career, there were plenty of questions as to whether his game would translate at the next level. Fast forward a couple of years and there’s no doubt that Kyrie Irving is one of the league’s premier point guards with an incredibly promising career ahead of him. For someone who has achieved so much at such a young age, Irving is refreshingly humble — a trait which stems from his upbringing overseas following his father’s basketball career and lessons imparted by him both on and off the court. This summer, Irving took some time to spread his love for basketball across the globe, including a quick stop in Hong Kong. In between meet and greets with local fans and showcasing his skills to the next generation of players in the region, we caught up with the young star to discuss the 2014 NBA draft class, shoes and where he got his game. 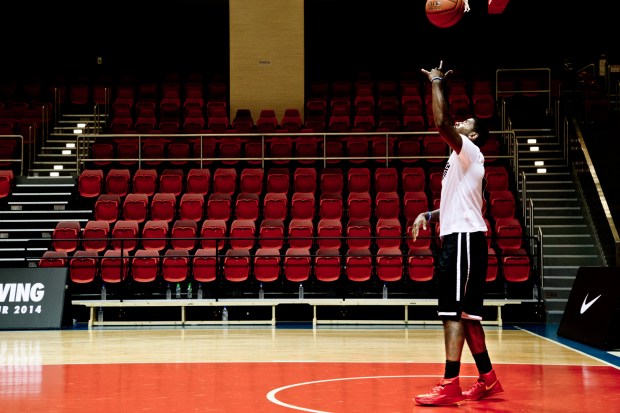 “I’m just trying to do everything I can this summer to be more prepared for next season.”

What are the kind of things you’re doing to get ready for the coming season?

Honestly just perfecting my craft and things that I do wrong, just perfecting it. Getting better at everything and even from a mental standpoint. I just had to fall in love with the game again as some of the passion got knocked out of me last season, but honestly it happens and I’m just trying to do everything I can this summer to be more prepared for next season.

Can you talk about the number one draft pick and the expectations you want to see happen with that?

Yeah I’m excited because there are a lot of guys with great potential from the pick and that’s what makes the draft pick that much more exciting, and IGN is doing a hell of a job on scouting him. When I actually go back to the U.S. I’ll be going to Jabari Parker’s workout and Andrew Wiggins’ workout so I’m excited to see what they can do, and obviously through NBA workouts to see how they test through it so you can tell. Because when I was coming out they tried to break me down through my workout.

So are you involved at all in testing the shoes or specking the shoe out in development?

Of course I have to, I test them out and see how they feel.

Any chance we’ll see a Kyrie Irving signature shoe later down the line? 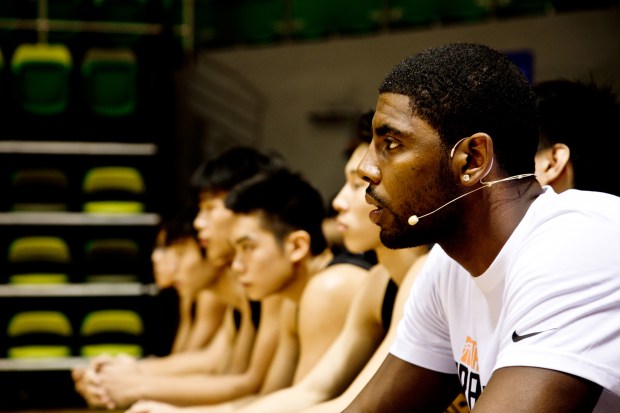 “I’m still a fan as I give credit where credit is due; I’m never gonna bash anyone for being talented because we all do amazing things on the court.”

For someone so young, how do you stay grounded and focused? You’re probably the youngest person in the room right now which is crazy.

Honestly it’s just I speak to my dad and I had all sorts of tales as a kid, and my dad is full of wisdom and I try to give as much advice as possible even though I’m 22. I’ve been through a lot with the sacrifices I had to make so I just want to be a good representation of my generation. Just connecting with everyone, and I’m an approachable person who can talk about anything anywhere so I want to keep it that way.

Sticking with your dad, I know he played ball – how much is your game modeled on how he played?

A lot of it is. The thing that my dad will probably tell anyone is that I used to watch almost everyone play from CP3 to Kobe to AI, to my dad to my uncle Ron who played in the NBA, from shooting guards to point guards and that is really where I learned. I was watching them on YouTube and I’m an avid YouTube watcher still to this day. You can ask my family because I would just sit on my computer and watch highlights all day of anybody and everyone. Plus I’m still a fan as I give credit where credit is due; I’m never gonna bash anyone for being talented because we all do amazing things on the court. So watching those other players and trying to learn as much as possible and keep my brain open to all these new things. As a kid I would watch all these videos and go out the back to try it.

What’s it like to watch all these videos and seeing these guys play, then going on the court and actually playing against them?

It’s exciting because not only am I a fan of them, they’re fans of me. Obviously I’m watching other people play and they do a move or something like that. They do a move and I’m gonna take it from them. That’s what the NBA is, it’s a copy league and we all do it in unique ways and I think that’s what separates the good from the great. It’s how you do it and approach the game.

Due to popular demand, Action Bronson shares the final version, the real deal so to speak, of his
By admin/Aug 7, 2014
Aug 7, 2014
0 Comments
Music

Mansions On The Moon - Somewhere Else Tonight

Genre-bending collective Mansions On The Moon are back with their new song called “Somewhere Else
By admin/Aug 7, 2014
Aug 7, 2014
0 Comments
Fashion

Ever since his contribution to A$AP Ferg’s “Shabba” as co-producer, things have been looking more
By admin/Aug 7, 2014
Aug 7, 2014
0 Comments
Music