The Start of a Unique Platform 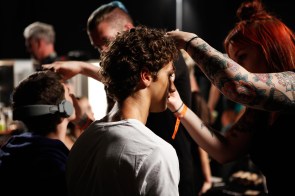 “By offering a large audience that otherwise may not have been conceived, LC:M brings on the kind of opportunities for designers that has led to success in both accolades and in business.”

Britain is no stranger to the fashion industry. In fact, studies have proven the UK as being the global origin of men’s fashion through the county’s introduction of traditional classics like the bowler hat, the dandy, the tie, the three-piece suit, tweed, tartan, and others. It comes as no surprise then that in only three years, London Collections: Men has become the industry’s leading platform for both emerging and established British designers.

The concept was founded by the British Fashion Council together with UK’s leading high street brand TOPMAN in a bid to offer support both creatively and commercially for designers that needed the help. “There were lots of younger designers who had no voice. It felt only right to give them the opportunity to let their collections and designs be seen by a worldwide audience and to help them grow,” says TOPMAN’s Creative Director Gordon Richardson. By offering a large audience that otherwise may not have been conceived, LC:M brings on the kind of opportunities for designers that has led to success in both accolades and in business. “Three or four seasons on, they’ve matured. They’ve now got an audience and buyers interested in them. So I’m really proud of it.” An example of such success can be seen in designer Craig Green who was a semifinalist in LVMH’s inaugural Prize for Young Fashion Designers competition, was nominated for a British Fashion Award last October, and has since worked with brands and names including adidas, MR PORTER, TOPMAN, Grenson and David Beckham. “I feel very fortunate to be part of it and I think it’s definitely the time for menswear in Britain. There is a huge diversity of people that you definitely don’t get in other places. I feel like London’s a real melting pot for people and that’s what’s so great about it” said Craig when we asked him how he felt about being part of LC:M. “It has been a great platform for a lot of young designers including myself. The support both in the UK and internationally over the past few years has been hugely beneficial to a lot of young designers’ progress.” 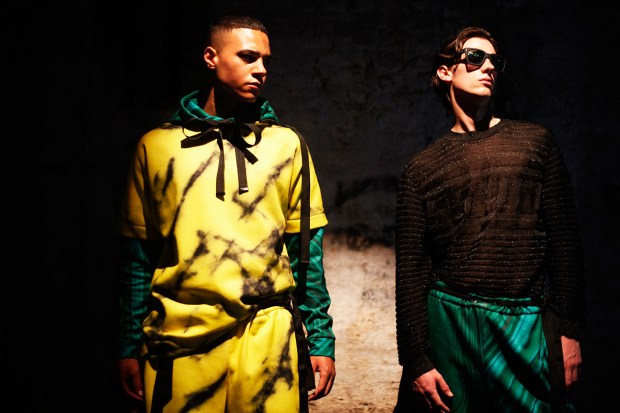 “In a country where Marks and Spencer dominated the mass market and luxury brands had the financial backing to stay afloat, young designers struggled to be seen.”

Although fashion has been prevalent within the UK for a long time, the commercial side of the industry as a whole was what seemed to be lacking. In a country where Marks and Spencer dominated the mass market and luxury brands had the financial backing to stay afloat, young designers struggled to be seen. LC:M then served to level the playing field, as attested to by South London’s Marc Hare, founder of shoe label Mr. Hare. “I think it’s taken a long time for commerce to get behind fashion. There has always been very creative, young designers in London, you just never really had money like the big fashion companies. Although even with that, before the growth of Burberry, there was only Marks and Spencer. There has been some money there but never really enough. Now it’s become very commercially viable.”

This was said during a collaborative presentation that saw Marc working alongside other now notable names including Kim Jones, Hardy Amies, Gareth Pugh, Shaun Samson, A. Sauvage and Linda Farrow, all of whom individually worked on a piece for a single collection curated by U.S.-based Been Trill. It stands obvious that now is a time where such diversity in names and reputation can coexist and collaborate together — where high meets low and media takes part in the evolution of the new culture. “It was super lovely for us. Because we’ve always been known for formal clothes and shoes, so it was good to get the opportunity to do something at the other end of the spectrum to what we normally do,” Marc says of the experience. It would seem LC:M has filled a void in three parts: awareness, business and diversity – no easy task according to Sir Paul Smith. “Well I think four years ago, it was a very brave thing to do. At the time, there were very established shows for men in Florence, Milan and Paris.” These other renown and longstanding podiums for fashion would only serve as a catalyst for the high level of competition surrounding fashion. So for any young, new designer to even fathom taking on the industry without help must have seemed futile. “What it does show is the level of competition in today’s world because the sheer volume of people making and selling clothes for men has increased so massively in the past not three, but 20 years,” says Sir Paul on the attitude Britain had with its designers. Without the necessary elements, together with skill and talent of course, the business of fashion would leave you high and dry. 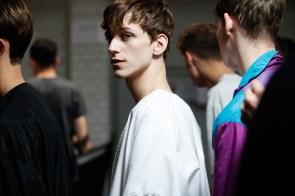 “From a slot to a day to now a full three-day event dedicated to menswear, the growth of it is clear evidence that Britain does in fact need London Collections: Men.”

This is exactly what Founder of Fashion East and MAN – the joint support scheme by Fashion East and TOPMAN – LuLu Kennedy noticed early on. Her work at Fashion East, the non-profit initiative that put supporting emerging fashion designers on the map, led her to become part of the creation of LC:M which stood as the answer to challenges Britain was facing. “We decided there was a severe lack of menswear despite a lot of great talent coming through, so we thought it was about time someone did something. Basically we replicated Fashion East Womenswear, a non-profit group show where we find sponsorship for designers with bursaries and a show. So it’s a real launchpad. Back when we started it, it was really one of a kind. So we teamed up with TOPMAN.” Now in its third year, LC:M has garnered the amount of support and reputation it needs to sustain itself. Its fast growth is surprising even. “The menswear scene is now really thriving in London, so it’s nice to help kick-start that. A whole lot of people have gotten behind it, but we’re still doing our small thing. On the downside though, I feel the schedule has gotten a lot more busy” Lulu says of the platform’s growth. And on what the future plans are for LC:M, she adds “I think it’s just about doing what we do, only better. We want to get the kids more and more prepared for sales in Paris and use the great people around us that are happy to support the program and give expert advice.”

All lines point to the fact that Britain, a country entrenched in menswear history, needed a platform like LC:M to show its worth. Despite its Savile Rows, three-piece suits, and the Dandy, the UK’s modern outlook towards fashion was largely focused on womenswear while neighboring countries were making it big in menswear. Then came the revolt in the form of aspiring fashion designs from young talents that grabbed the attention of the British Fashion Council and its Chief Executive Caroline Rush. “We were seeing the talent in menswear and it wasn’t doing it justice in womenswear. The BFC was always really focused on womenswear designers. I guess it’s just the history of where it has come from, which is slightly odd when you think of how much heritage we have in menswear.” What then ensued was a slot after the womenswear shows where male designers could show, however it was soon apparent that an after-slot was not enough. “It then grew into an installation alongside it and then we were like, ‘We need a day for menswear.’” From a slot to a day to now a full three-day event dedicated to menswear, the growth of it is clear evidence that Britain does in fact need London Collections: Men. “We looked across the pond and saw that there were great brands showing in Milan and Paris, yet they don’t have our young talent and that’s where you get the breadth: the heritage, the contemporary brands in the middle, and the young guys that gives us a unique position that London can own for years to come.”

From Irish-inspired designs to collections made with sustainable practices.
By Jack Stanley/Jan 7, 2020
Jan 7, 2020
4 Comments
Fashion

Drawing its inspiration from the silhouettes of early basketball sneakers, Y-3 unveils the all-new
By HB Team/Jul 31, 2014
Jul 31, 2014
0 Comments
Fashion

Here’s something quite intriguing for your Thursday listening pleasure. After playing the record in
By admin/Jul 31, 2014
Jul 31, 2014
0 Comments
Music

Currently in a glorious limbo between a musical newcomer and an industry icon well beyond his
By admin/Jul 31, 2014
Jul 31, 2014
0 Comments
Fashion

Something of a cult favorite among design aficionados, Tokyo-based stationery and accessory brand
By Jonathan Poh/Jul 31, 2014
Jul 31, 2014
0 Comments
Fashion

Nomad, the company responsible for the handy Chargekey cable, is back with its latest product, the
By James Shorrock/Jul 31, 2014
Jul 31, 2014
0 Comments
Footwear Fashion