In the wake of the recent Jackson-Woodson firings in the NBA, I considered just how difficult it is for a coach to properly induce a particular philosophy or style of play, whilst inspiring and maximizing his players’ talents. More than just a strategic wizard, today’s coach must be perceptive enough to recognize what it is that motivates each player just as a marketing team would survey its prospective customers. You see, difficulty doesn’t lie in creating a game plan or advertisement, it’s understanding who you’re persuading and how that’s the most challenging.

Switching focus onto the business world, realizing what drives consumer behavior during the purchasing process is a skill that encompasses many of the major academic disciplines. This task of course intensifies when attempting to enter a foreign market, as new countries bring about the challenge of enticing unfamiliar cultures and demographics with different tastes and customs. Nevertheless, the success of one’s foreign expansion can easily fall upon the study of its consumer’s behavior. “What’s interesting, whereas the vast majority of the world associates luxury items with the upper class, Japan’s middle class is the one that buys into this opulence.”

Since HYPEBEAST’s inception almost 10 years ago, we have watched countless brands within the realm of fashion prosper after taking this precarious leap of faith. Inspired by these globetrotters, we wanted to examine the difficulty in tailoring one’s product to a different consumer culture by looking at the two Eastern and Western worlds that are undoubtedly critical to our creative landscape – the United States of America and Japan. With the help of some industry friends, we discovered consumerism is quite different between these two capitalist powers, at least for now.

To understand why Japanese consumers behave the way they do, we must first take a step back and examine the fundamental values of this ancient civilization. A densely populated island nation, Japan places its faith in the cultivation of virtues as well as the humanistic teachings of Confucianism – an ideology that emphasizes, among other beliefs, self-preservation and the importance of continuous learning as an aid in drawing conclusions from facts rather than emotion. This foundation supports the inward struggle between what are known as one’s “giri” and “ninjo.” A concept that dates back to Japan’s feudal period, giri refers to a citizen’s duty or obligation to maintain social harmony with a self-sacrificing devotion or rather, trading personal gain for the greater good. Ninjo on the other hand opposes giri as it alludes to the human emotions that arise from satisfying one’s social obligations, such as empathy, compassion, love, etc. These profound concepts don’t just appear in generational allegories that guide its young, they also hold true in Japan’s business world.

During the height of Japan’s post-World War II economic boom, its citizens were spending record sums of money on luxury garbs, which were assumed to be of higher quality. This conspicuous consumption served as a badge of honor signifying one’s socioeconomic standing, and in a way further satisfying one’s giri. What’s interesting, whereas the vast majority of the world associates luxury items with the upper class, Japan’s middle class is the one that buys into this opulence. It is this dominant demographic that has driven the importance of fashion in terms status. However, since experiencing the burst of its asset price bubble in the late 1980s, consumer confidence has weakened, thus pushing buyers to be a bit more economical. Mixing these circumstances together with its foundation in Confucianism, the Japanese began spending their disposable income much differently.

“Japanese do a lot of research before they buy anything, I mean really a lot of research,” says Kent Kilroe of Freemans Sports Club. “Their magazines are incredibly detailed about products and they want to know a lot about whatever they’re buying before they make an investment.” Kilroe went on to further assert, “Japanese consumers are experts in quality and craftsmanship” or as Morgan Collett of Saturdays mentioned, “Eastern consumers have a meticulous eye for detail.” In looking at this shift, today’s average Japanese consumer may not spend their money as frivolously as they once did, but they still believe education helps in attaining the best product available to them, which in turn further maintains their socioeconomic status. 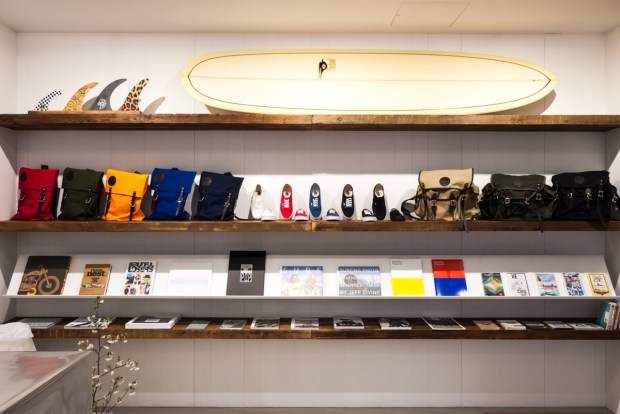 “Comparing consumer behaviors between the United States and Japan can be quite difficult however, as one has a very diverse society and the other is known to be ethnically homogeneous.”

Comparing consumer behaviors between the United States and Japan can be quite difficult however, as one has a very diverse society and the other is known to be ethnically homogeneous. Jey Perie of Kinfolk clarifies by saying, “America can’t be studied without going in detail and analyzing each ethnic group and the way they influence each other.” Perie touched on another unique observation: “America will always have a large second generation of immigrants who want to live, learn and consume the same as other American kids. As opposed to Japan, who made the deliberate choice to minimize foreign inputs in their society.”

What can be said about much of America however, is that its citizens are very much individualistic in nature, focused on convenience and instant gratification. While the Japanese emphasize quality and ethos, the West has a more “consumerist attitude” according to jeffstaple. Americans “buy this because it matches this, or buy this for this one occasion and then I’m done with it.” Perie added, “It’s all about form versus function.” The Japanese will focus on quality, while the Americans will “look at authenticity and cultural relevancy.” Perie used NEIGHBORHOOD as an example stating although “American bikers” and “punk philosophy” inspire it, it has no direct ties to those cultures. Yet they’re able to pick and choose the best features from both worlds to produce “an amazing collection of high quality garments.” On the contrary, the West would rather endorse a brand based on its heritage even if the quality or design is of a lower standard.

The Reason Behind Behaviors

Perie went on to further state that whereas the Japanese “study the cultural movement where a trend originated,” the American fashion industry “is always trying to react to new trends directly influenced by music and popular culture.” The internet enables this distinction by putting consumers in direct contact with its source or tastemakers. As a result American trends evolve and disappear much faster, while Japan’s lifestyle publications “are very good at creating a [lasting] lifestyle around a trend.”

Defined by decades and even centuries of economical and spiritual influences, the differences between the average Japanese and American consumer are quite apparent. But how do these qualities and behaviors transition into the retail environment? Stay tuned for the second part of our case study as we attempt to answer that very question.

Dissecting the Difference Between Japanese and American Retail: Part 3 - The Internet’s Role

Although loyal allies to the world and innovators within our creative culture, Japan and the United
By Robert Marshall Jr./Aug 22, 2014
Aug 22, 2014
0 Comments

Dissecting the Difference Between Japanese and American Retail: Part 2 - A Job Versus a Career

From the narrow perspective of a wholesaler, Japan and the United States of America may appear to
By Robert Marshall Jr./Jul 15, 2014
Jul 15, 2014
0 Comments
Gaming

A microdrone-wielding artist.
By Aaron Chow/35 Mins ago
35 Mins ago
0 Comments
Food & Beverage

Now under the helm of new Creative Director Alexander Wang, Balenciaga took to Paris this week to
By Staff/Jun 26, 2014
Jun 26, 2014
0 Comments
Footwear Fashion

A no-frills kind of sneaker, the adidas Skateboarding Seeley Cup is refreshingly minimal in its
By HB Team/Jun 26, 2014
Jun 26, 2014
0 Comments
Fashion

Rockwell by Parra is well known for its artful urban garments and accessories but this season, the
By Staff/Jun 26, 2014
Jun 26, 2014
0 Comments
Footwear Fashion

Known for its innovative conceptual backpack designs, Côte&Ciel looks to the oceans with its
By Nate Bodansky/Jun 26, 2014
Jun 26, 2014
0 Comments
Fashion

From Sweden’s Sneakersnstuff we move to North Carolina’s Social Status to get a look at its
By James Shorrock/Jun 26, 2014
Jun 26, 2014
0 Comments
Footwear Fashion