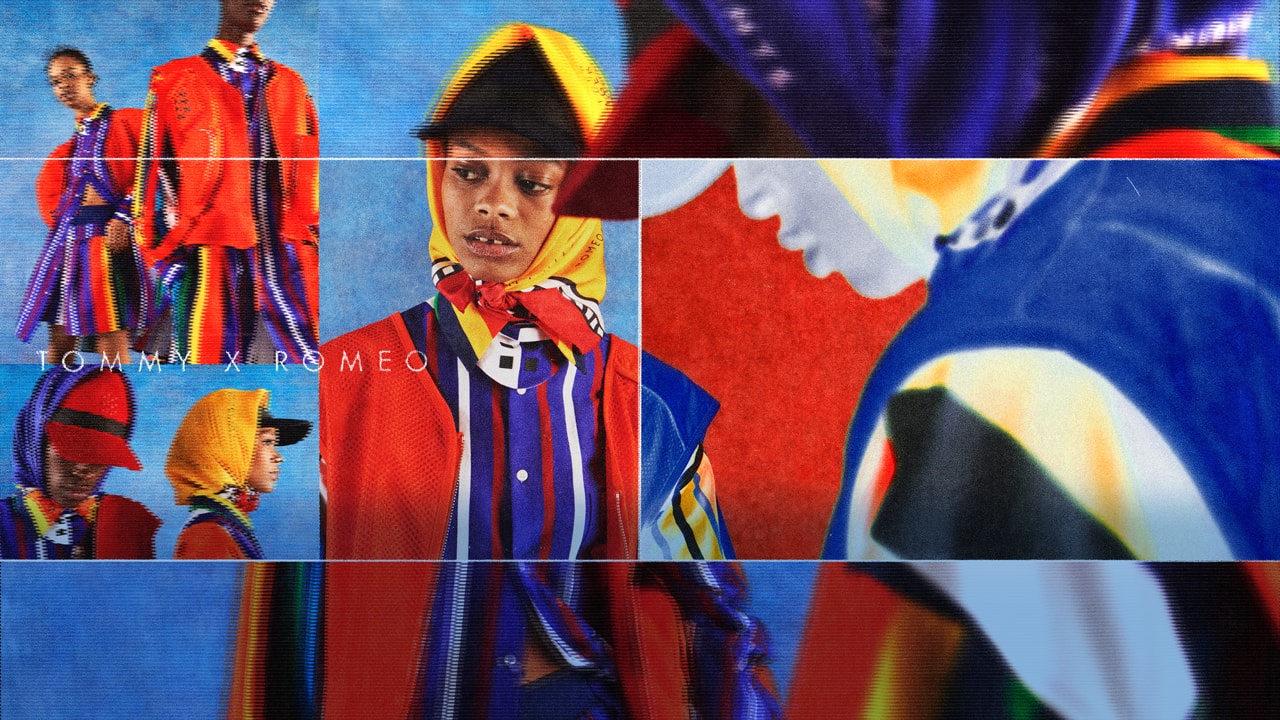 Romeo Hunte Digs Into Tommy Hilfiger’s Archives for New Capsule Collection
The mentor and mentee come together for a collaboration that spotlights BIPOC creatives.

Romeo Hunte has never been one to doubt his instincts. At a young age, the Brooklyn-raised designer turned down two full athletic scholarships in track and field to attend the Fashion Institute of Technology. This decision led him on a path to creating his namesake brand, executing on a singular approach to fashion that caught the eye of the inimitable Tommy Hilfiger. Taking on the role of Hunte’s mentor, Hilfiger helped the young designer hone in not just his artistic vision, but also his proclivity to break conventions and celebrate individuality. “I’ve been supportive of and worked with Romeo for over five years, and I see a lot of my younger self in him,” says Hilfiger. “I want to nurture his incredible talent in a way that gives back to an industry that has given me so much.” Hilfiger found the perfect opportunity for this relationship to come full circle with the unveiling of the TommyXRomeo Fall 21 capsule collection, for which Hunte lived out every fashion enthusiast’s dream: He dove into Tommy Hilfiger’s archives, pulling references that cross multiple decades and reimagined the iconic designs through his own, modern lens. 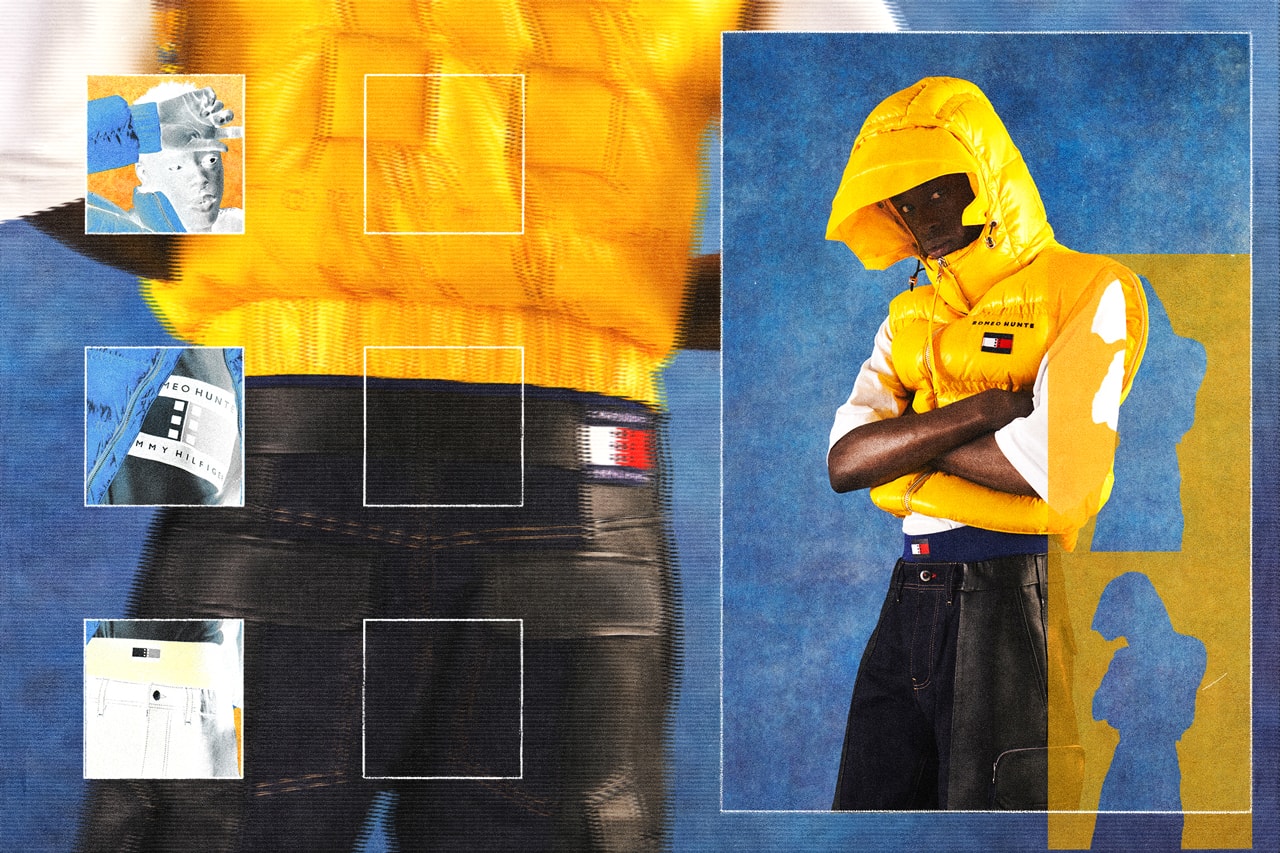 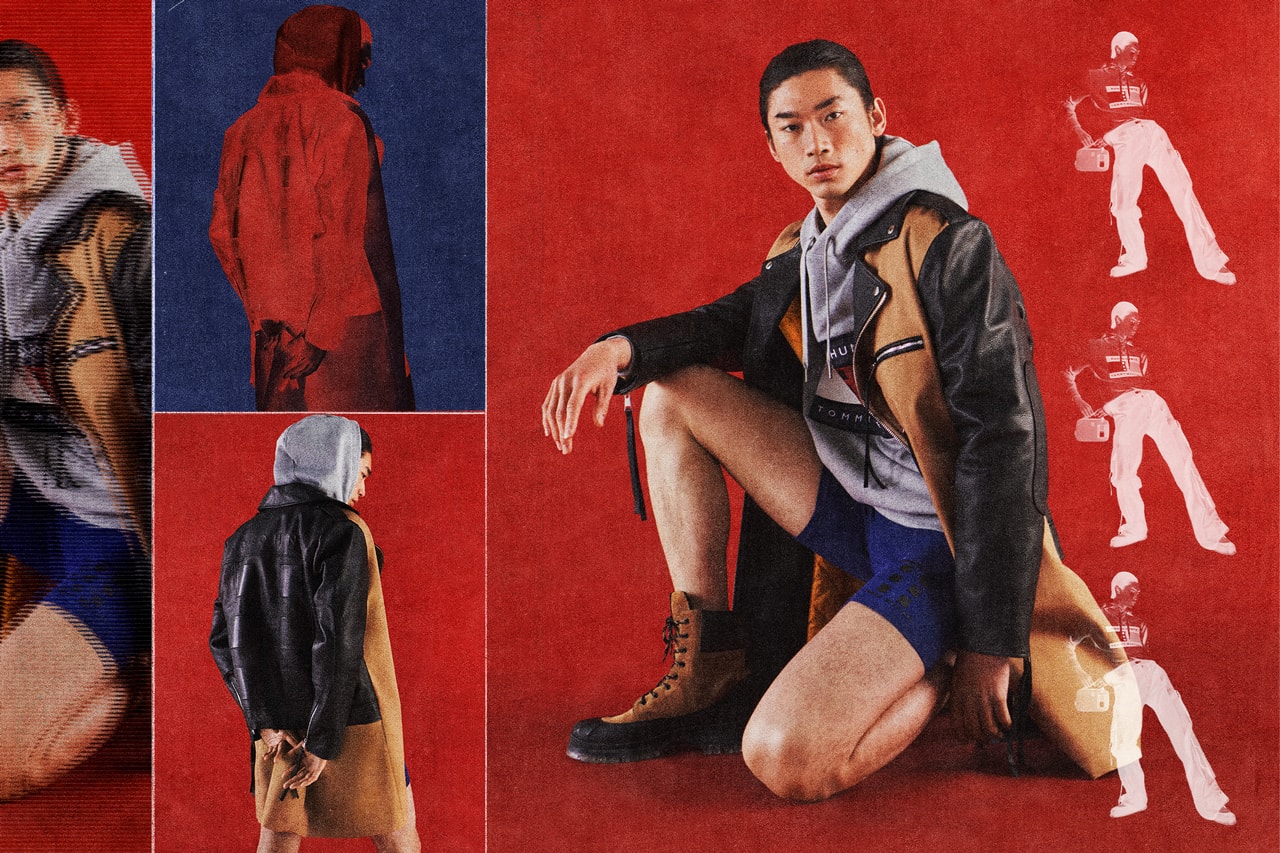 The coming together of these two American designers goes far beyond clothing. It represents their shared desire to forge their own paths, not in a self-serving way, but as a means of creating opportunity for others. Reminiscing on the earlier days of his brand, it becomes clear that Hilfiger has a knack for identifying new talent. “At that time, Run DMC, The Sugarhill Gang, Grand Puba, pioneers of hip-hop were wearing the brand,” says Hilfiger. “And then this new guy comes from Harlem to my downtown showroom and my brother, Andy, introduces me and says, ‘Hey Tommy, this is Puff Daddy [P. Diddy]. He wants to start his own brand called Sean John.’” He brought Diddy into the design studio to mentor him and show him the nitty gritty and not-so-glamorous details of building a clothing brand. “And now that I’m mentoring Romeo, it’s very similar in a way.” It’s also indicative of the potentially meteoric rise in Hunte’s future.
In the spirit of creating something nostalgic yet of-the-moment, every detail is intentional, from the way each piece is reimagined clashing Tommy Hilfiger’s house codes with Hunte’s signature techniques, to the cast and crew who brought the corresponding campaign to life. Each element of the collection is an expression of Hilfiger and Hunte’s belief that fashion isn’t just vanity, and we have the ability to inject meaning into what we wear. This starts with Hunte’s six-box logo which blends with Hilfiger’s timeless silhouettes throughout the series. “The six boxes symbolize the six core pillars of my brand, namely genderless, sustainability, mixer (mixing media + silhouettes), transformative, stamp (print + details) and heritage,” says Hunte. “Going through Tommy’s archive brought back so many memories of the ’90s and I wanted to take elements of that and what it meant to me. Everything from picture day at school — the day you gotta get fly, you gotta get fresh, you gotta pull up — and how can I take something from the past, recreate it and have an impact.”

“And then this new guy comes from Harlem to my downtown showroom and my brother, Andy, introduces me, and says ‘Hey Tommy, this is Puff Daddy. He wants to start his own brand called Sean John.’”

While the clothing creates a sartorial foundation for their work together, Hunte and Hilfiger are steadfast in practicing what they preach. For Hilfiger, a shining example of that is his People’s Place Program, an initiative launched in 2020 with the mission of advancing underrepresented BIPOC communities throughout the fashion and creative industries, both in front of and behind the camera. “That is what the People’s Place Program is all about. In 1969, when I was 18 years old, I opened my first store called People’s Place. It was literally fashion for the people,” says Hilfiger. “And ever since, I’ve always lived by the mantra of being diverse and inclusive for over 50 years.”
Together, the pair chose a diverse cast and crew for the collection’s campaign — from the models who wore the clothes, to the hair and makeup artists who worked on set. “I wanted to be able to loan those assets to talented people who don’t always have equal opportunities. Growing up, people helped me along the way because I really did start with $150,” says Hilfiger. The result is a hard hitting series of images that capture the essence of the new age fashion zeitgeist. Shot in London by Ronan Mckenzie, the campaign visuals feature models Ikram Abdi Omar, Aaliyah Hydes, Hidetatsu Takeuchi and Babacar N’Doye, styled by Nathan Klein. Rounding out the launch, six one-off upcycled TommyXRomeo polos will be auctioned off via the online auction site Catawiki, with all proceeds donated to the Fashion Minority Alliance.

“Inclusivity isn’t just about representation, it’s about amplifying voices and actively embracing everyone at all levels of the industry. It’s about inspiring designers to know that if you come from Brooklyn, you could create something that’s very Brooklyn and still sit in a luxury market.” 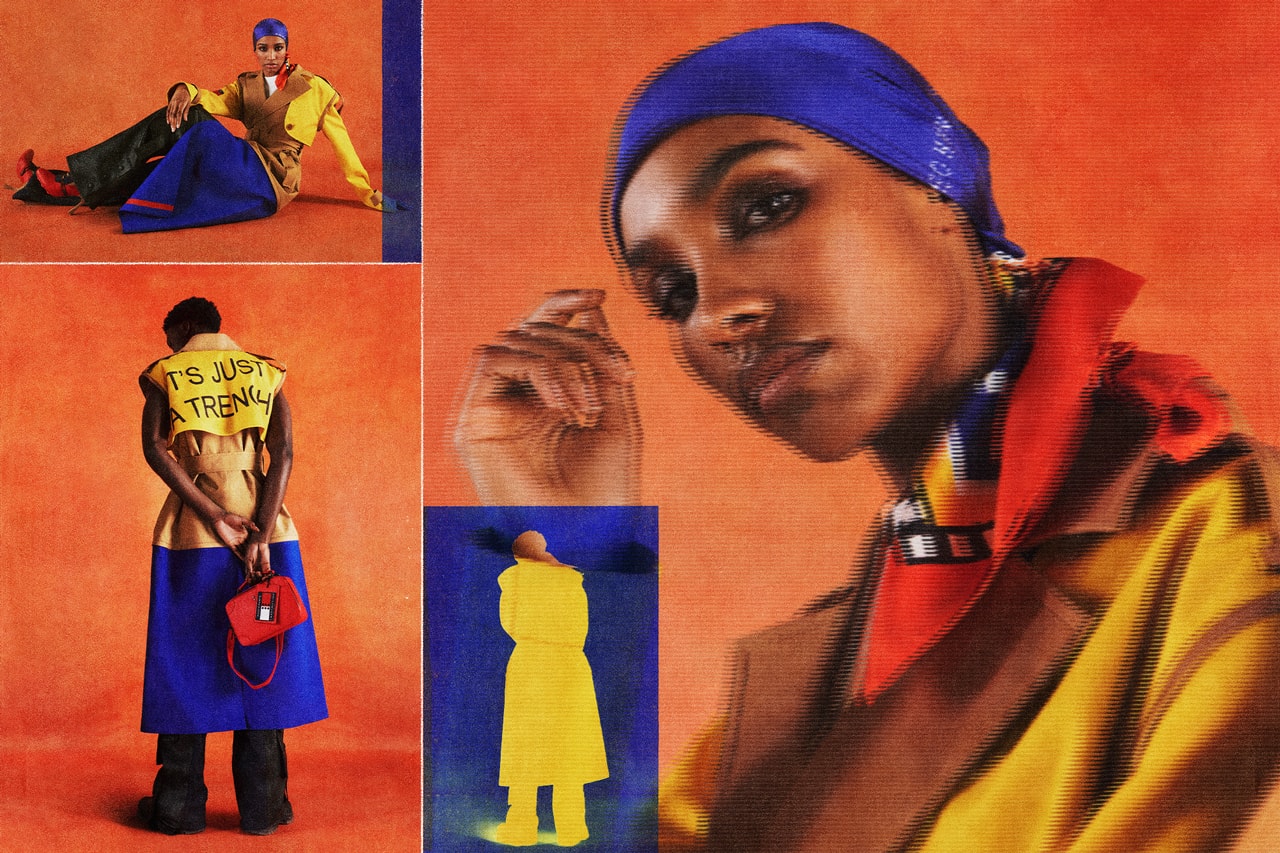 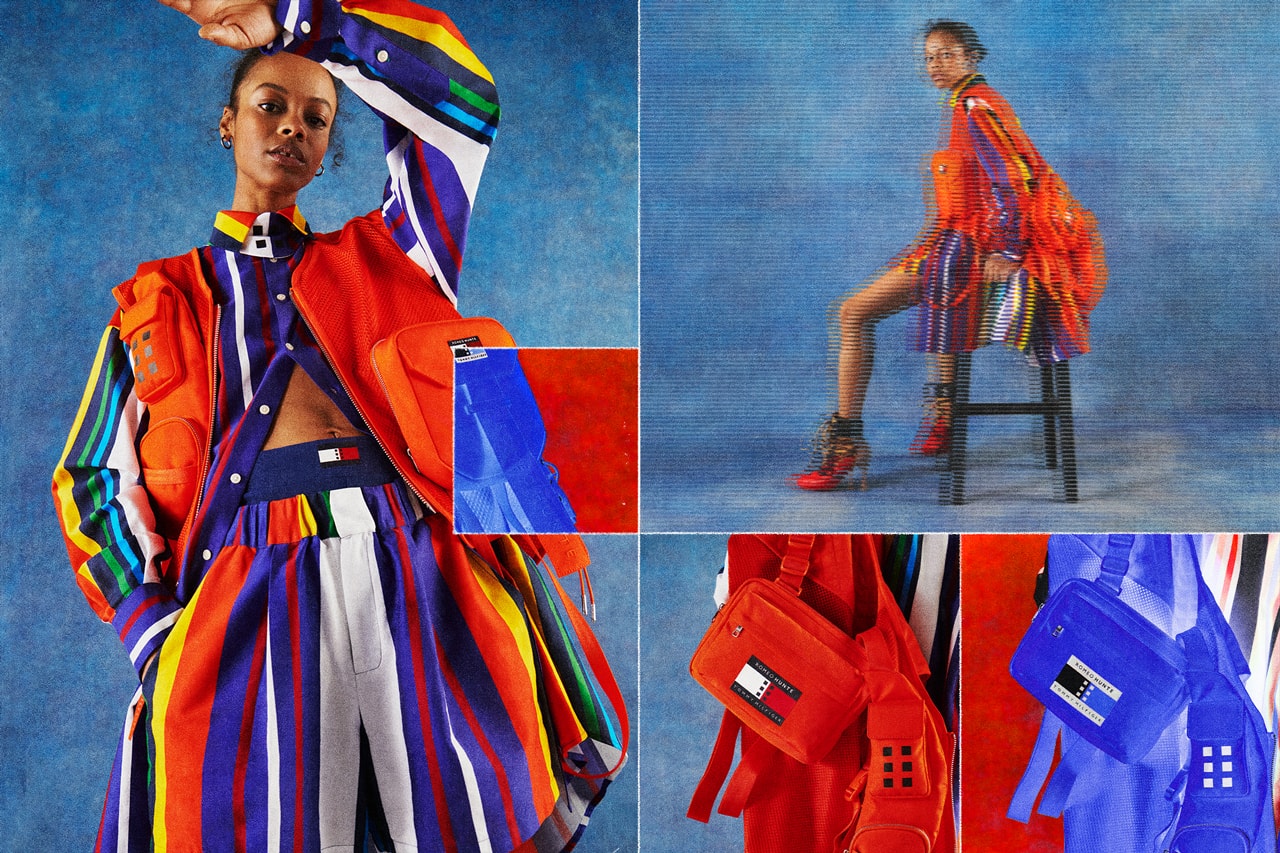 Unrelenting in their pursuits, Hilfiger and Hunte, with the help of the People’s Place Program, took this creative approach to the streets — literally. The duo commissioned two local artists in New York City and London to reinterpret the visuals behind the TommyXRomeo campaign and the community it serves, via vibrant wall art in key city spots in the week prior to the collection launch. Painter and pattern maker, Uzo Njoku, created a mural in her unique artistic style right on Nassau Avenue and Banker Street in Brooklyn, while the London streets have been graced by fine artist Annan Affotey, who showcased his artistic talent with a mural at 112 Tabernacle Street. The murals will remain on location through the end of the month, and have QR codes that appear with bonus video content, including BTS footage of the making of each mural and intimate interviews with the artists. 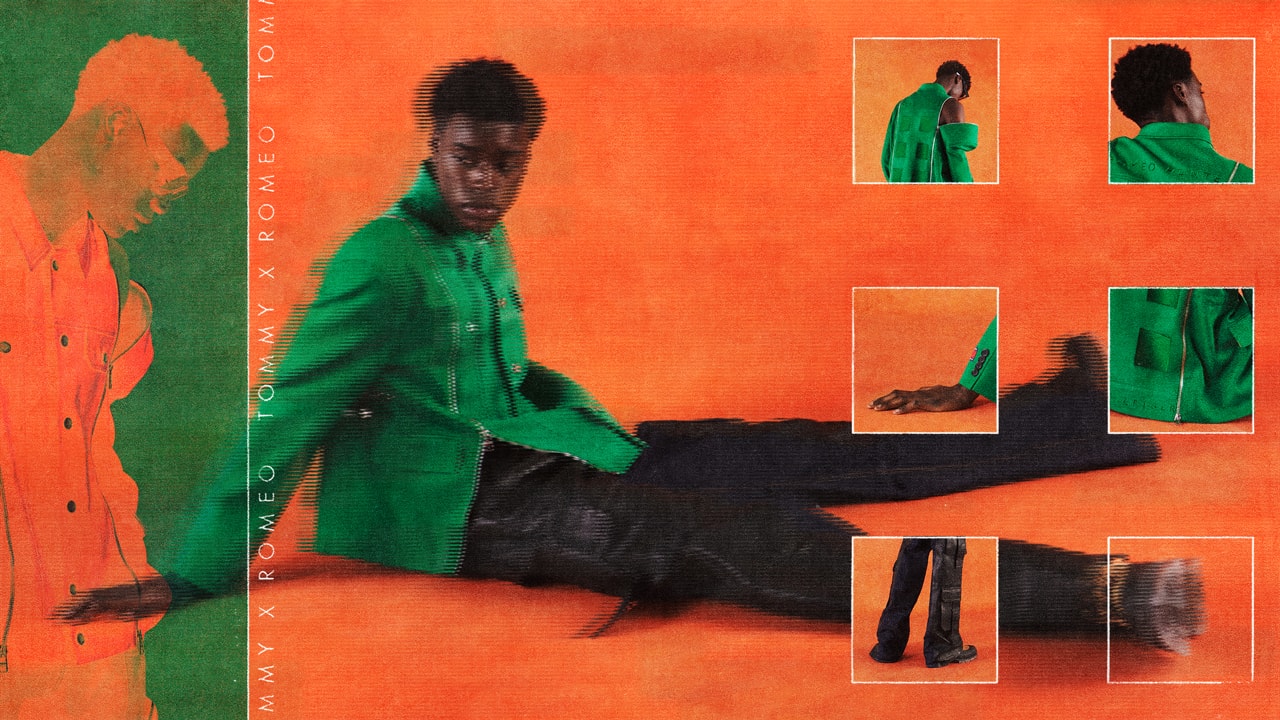 The TommyXRomeo collection is proof that Hunte’s instincts are as sharp — if not sharper — as the day he chose his path in fashion. More impressively, by staying the course he and Tommy have created a ripple effect in the industry, uplifting the work of some of fashion’s most deserving creatives. “Fashion reaches into everyone’s lives; from the clothes they wear everyday to the people they follow and admire,” says Hunte. “Inclusivity isn’t just about representation, it’s about amplifying voices and actively embracing everyone at all levels of the industry. It’s about inspiring designers to know that if you come from Brooklyn, you could create something that’s very Brooklyn and still sit in a luxury market. That’s what our movement is, and that’s what we believe in.”
Check out the TommyXRomeo collection in the images above. Head to Tommy Hilfiger & Romeo Hunte’s websites to shop the capsule now.