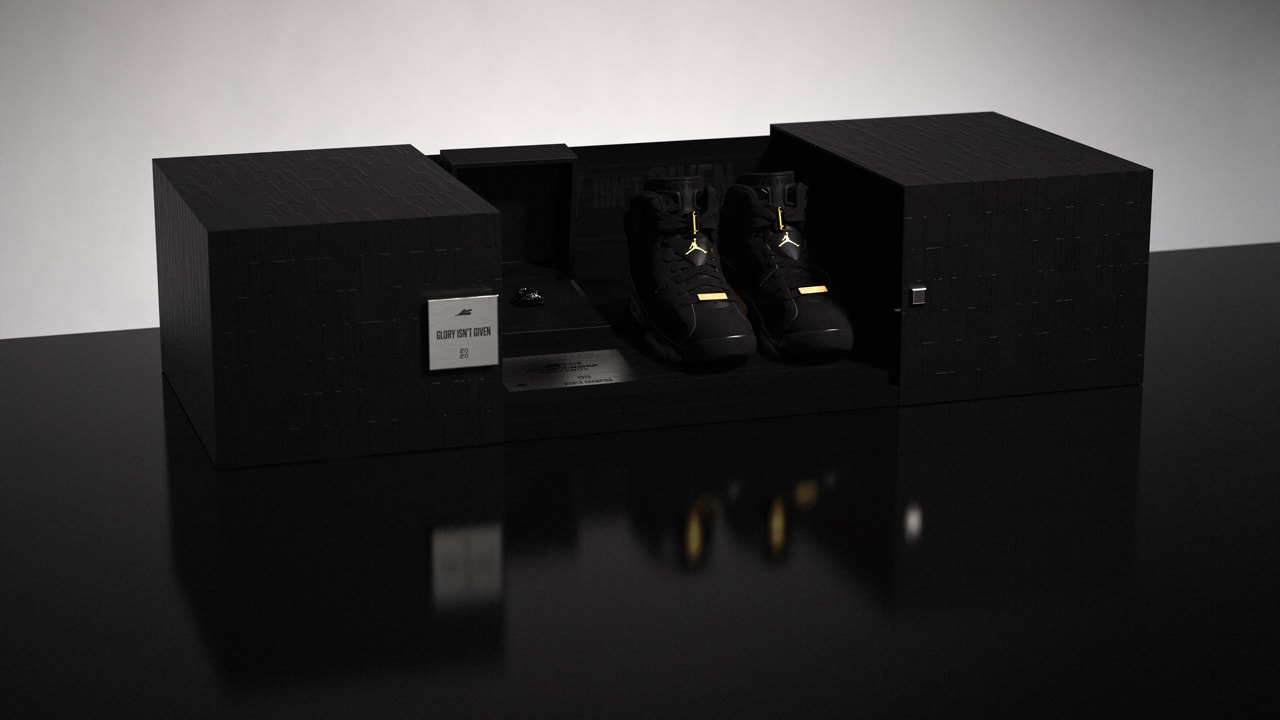 Take a Look at the ‘Call of Duty’ League Champions Kit
Plus, a close-up of the CDL x PRIVATE LABEL Collab.
Presented by Call of Duty

The 2020 Call of Duty League Championship is on the horizon and this year’s winners will receive far more than just bragging rights. The triumphant team of the tournament will be issued an elevated champions kit fit for a king — quite literally. Winners will receive a specially-created throne, along with an impressive Joe Perez-designed commemorative box that houses the sought-after champion’s ring. The League also wanted to outfit winners with a gift that caters to their lifestyles outside of the arena: custom GMP Jordan 6s. The tournament wouldn’t be complete without a trophy, and even that goes above and beyond the status quo with its sleek and unconventional appearance. HYPEBEAST got a look at the covetable set up along with a closer look at the CDL x PRIVATE LABEL collaboration. 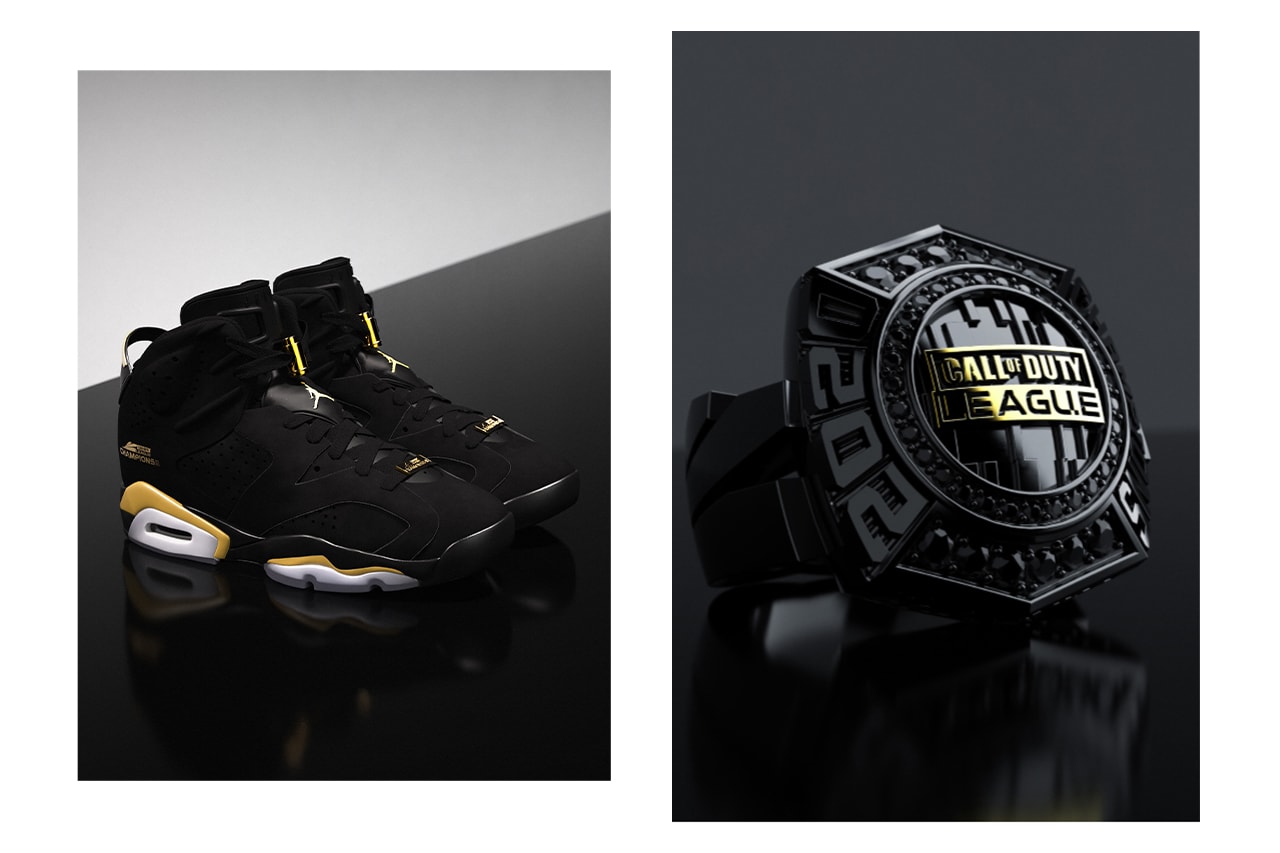 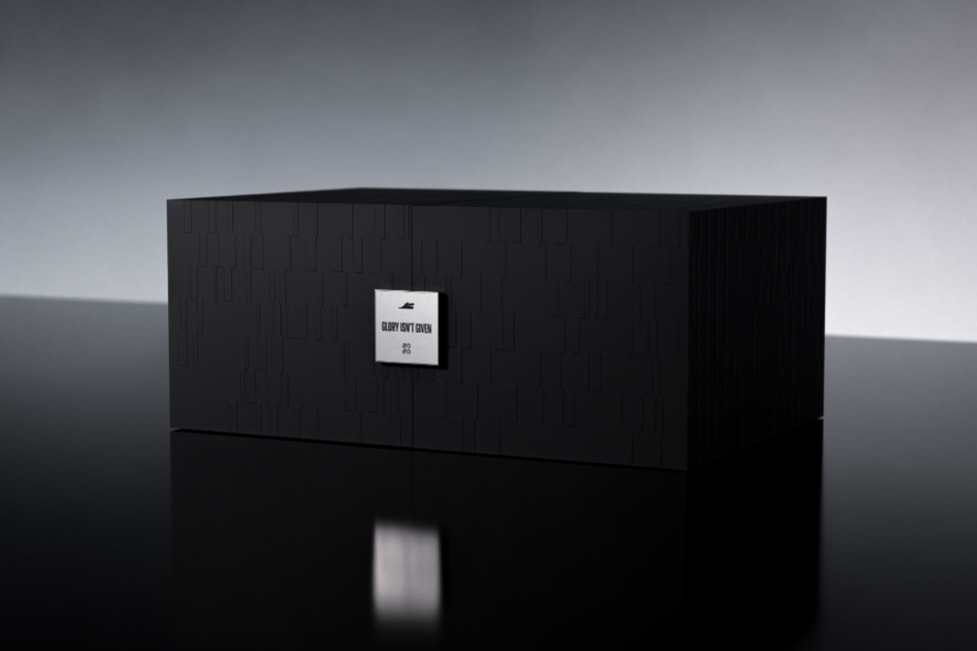 CDL didn’t skimp on talent when it came to the official 2020 champs kit, which is designed by Kanye West’s former creative director Joe Perez. “The overall look of the champs kit is industrial mixed with a future tech aesthetic,” says Perez, who applied his talents to a commemorative automatic sliding case complemented by a matching lighting unit and championship weekend textures. Inside is the crowning jewel the players will be working for: a ring adorned in black diamonds. It also comes accompanied with custom Jordan 6 GMP sneakers. Channeling a winning spirit, the shoes are known for being released in 2012 for the Summer Olympics in London and this particular Air Jordan 6 colorway was released as part of the “Golden Moments Pack.” Those who reign supreme will see their one-of-a-kind kicks adorned with the CDL Champions call out and team logos, their gamer tag, a 2020 champions hit and CDL’s slogan, “Glory Isn’t Given.” Holistically, the kit serves as a striking monument to the winners’ success. “It represents a moment of the highest achievement in a game that requires the utmost skill and strategic planning,” says Perez. “My hope is that the winners will regard the kit as the ultimate reward for the realization of all of their hard work and years of training.” 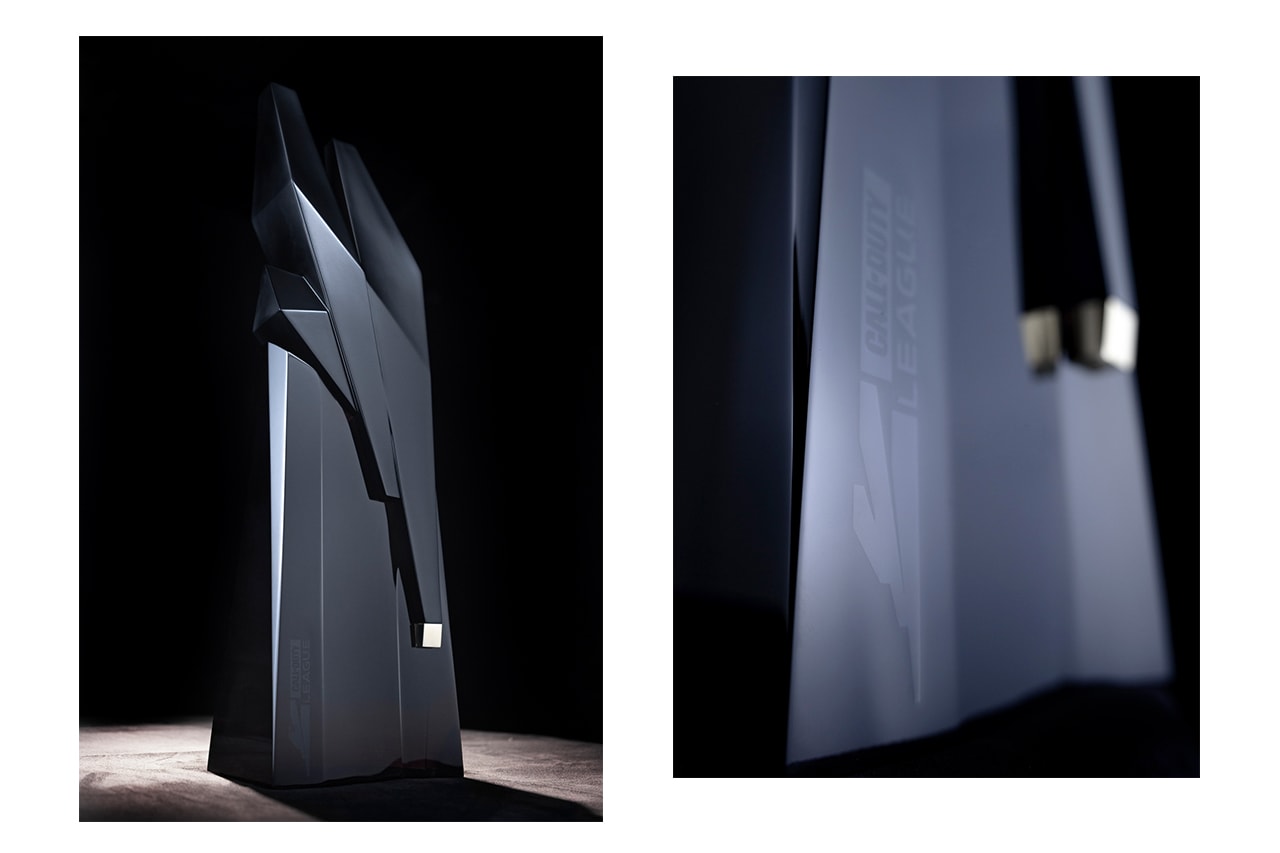 The grand dame of the tournament is, of course, the trophy. True to form, CDL took a non-traditional approach to its design, whose sculptural form is meant to double as a work of art. This feat of aesthetics was achieved by inverting the the Call of Duty League logo to convey the timelessness, strength and epic nature it takes to win the prized piece. The triple-tiered trophy is also interactive, allowing for the removal of top logo piece to be displayed or held on its own separate from the base. 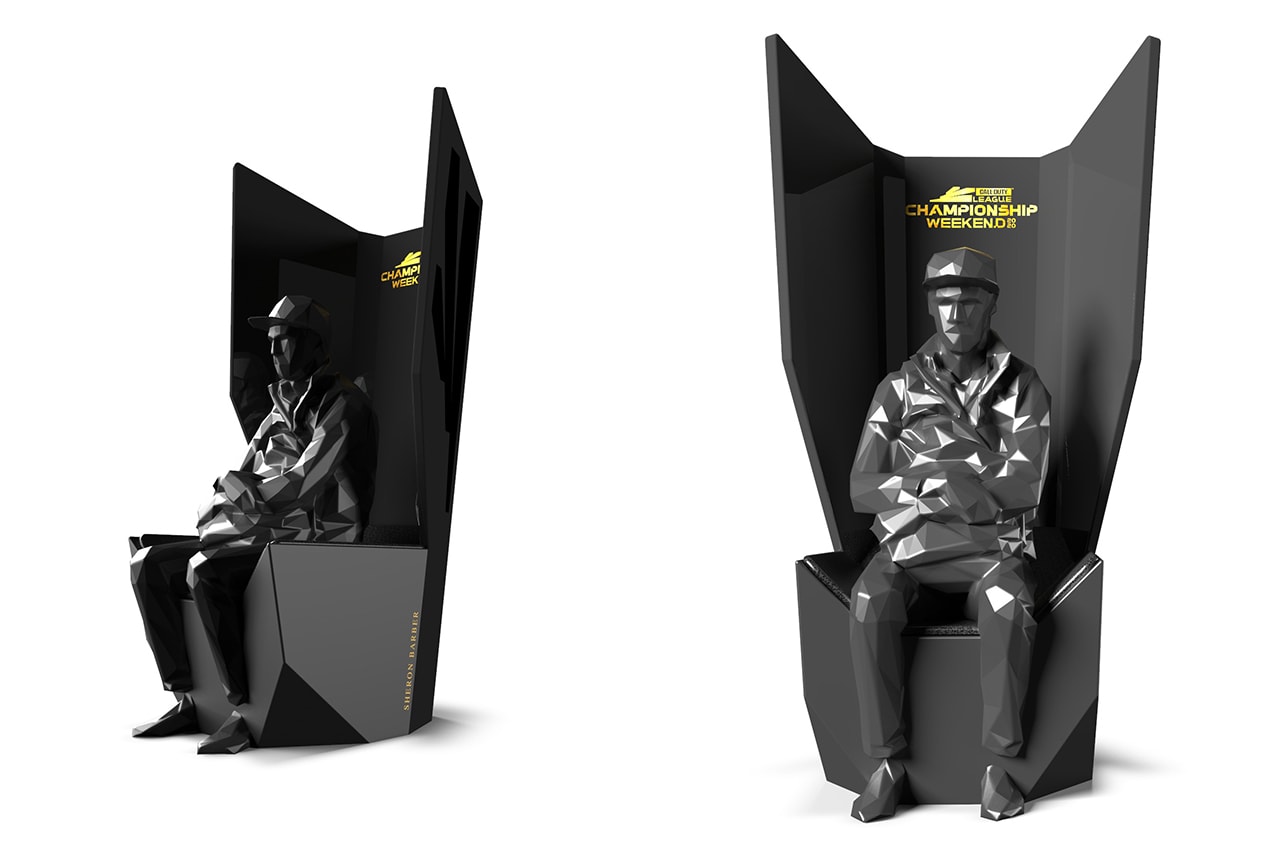 The first-of-its-kind championship throne was designed by Sheron Barber, known for his work with taste-making stars like Post Malone and Travis Scott. Aesthetically, the throne takes cues from CDL’s branding and its family of awards, including trophies and rings — but not without thoughtfully considering its user. Barber assiduously designed the offering to accommodate the comfort and functionality of a pro player. He also took his own personal experience as a gamer into consideration, injecting a bit of nostalgia by referencing the arcade games he played as a kid as a point of inspiration. This comes through in the throne’s statement-making monolithic design and cubist appearance. It also provides its recipients with a sense of pride through details like the year, the player’s kill streak and more personal touches to make each iteration truly distinct. 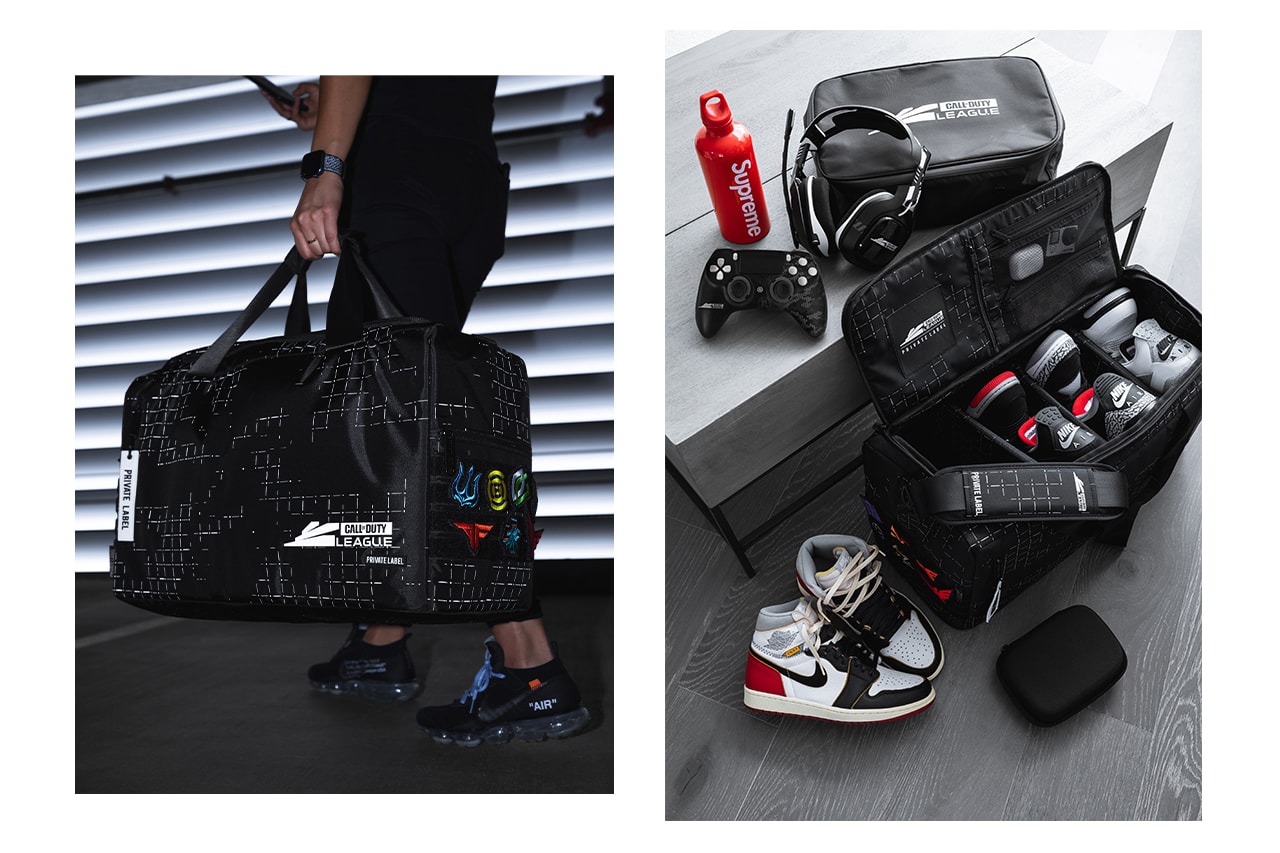 The League is also offering fans the opportunity to upgrade their own personal kit with its PRIVATE LABEL collaboration.The limited-edition duffel, which is available now, features a reflective glitch pattern and includes 12 CDL customizable team patches. What’s more, it fits at least four pairs of shoes and provides a secret pocket for a laptop.

The CDL Championship will take place on August 29 and 30. Check out the League’s YouTube page for coverage of the tournament. The CDL x PRIVATE LABEL Travel Duffel is available now at PRIVATE LABEL’s website and retails for $185 USD.