Well before the advent of social media and other large scale advertising platforms, Stephen Malbon was generating buzz and spreading the word through hand-designed content and launch events that he organized himself. Tasked with designing a magazine while in school, his first print publication, The FRANK Book, welcomed rising talents including RZA, Lenny Kravitz and Futura 2000, and would lay bricks for what would become the Malbon Group — which now includes a creative content agency (BON), the Frank151 lifestyle brand and a creative community (The League).

In this interview, the founder and CEO looks back at the rise of FRANK151 and its current role as a culture-shaping entity.

The Start of FRANK151 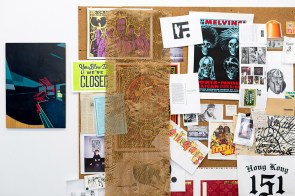 “We started FRANK
to help give exposure
to people who are really talented but didn’t have an outlet to express their creativity.”

Can you introduce yourself and your role at FRANK151?

My name is Stephen Malbon. My role at FRANK151 Media Group is overseeing the company from an executive level and helping with the overall creative direction. I also work with my teams to curate the theme of our daily, weekly, monthly and yearly content grid and schedule.

How do you think FRANK151 differs from others in a similar space?

We started FRANK to help give exposure to people who are really talented but didn’t have an outlet to express their creativity.

Before the Internet and social media flourished, print was one of the only ways to make that happen. We’ve printed books with Bob Marley’s kids, De La Soul, Lenny Kravitz, Mister Cartoon and DMS. We’ve also worked with the legendary Futura and Russ Karablin of SSUR. And we still print today because of that legacy we started, and because we still believe in it.

We were not always focused on monetizing FRANK, so we were always happy with breaking even. One thing we did always focus on was allowing artists to truly express themselves. This created an influential and organic fan base, attracting the likes of A$AP Rocky, Nick Diamond, SchoolBoy Q, Erykah Badu and brands like Stussy to want to work with us.

For example, A$AP Rocky approached us and said, “I wanna do a book with you guys based around my crew A$AP Mob and Harlem, can we do it?” Obviously we said, “Of course, we’ll do it homie, you’re A$AP Rocky.” Apparently, as far back as he can remember he’s been collecting FRANK, and that definitely has something to do with why he would donate his time to the project we worked on together.

Was FRANK151 launched with any sort of goal?

Initially, the goal was to pass electronic pre-press design class at the Art Institute of Atlanta in Buckhead, Georgia, and design a magazine. And I did it! The other goal was to print the book every month in ATL. We would give the books out at clubs, boutique retail stores and record shops, and get ads from those places as well. FRANK is now a quarterly. It was crazy; in the beginning, I thought I could do it all myself with no staff — sell ads, draw, design. I had a few people helping me who were crucial in the beginning, like my sister Catherine, my cousin Josh and my brother Mike in New York.

What was your exact business model or the means to sustainability in the beginning?

We were planning to get ads from local clubs, promoters and stores in Atlanta as well as try to get New York and LA brands to do ads — like Vans and DC shoe companies. We thought to throw release parties, charge at the door and get a cut of the bar.

FRANK151 as a Growing Platform 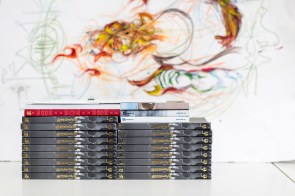 “You hold FRANK and touch it, and look at it, and you learn about the history of it, and the heritage etc., then I believe that it becomes a love mark when you actually see it, and it gives you a good feeling.”

With its growth, you took on a more agency-based role. What jump-started this?

When we started throwing book release parties, Nike came to us first and said, “Can you start helping us do this type of marketing in multiple cities?” Since we had been mailing FRANK to our friends in all the big US cities, we already had a built-in team in each city helping us promote FRANK. It’s a type of FRANK network.

After Nike, HBO, And1, ESPN, Molson, Coca Cola, Coors Light and Target all worked with us too. About 10 years ago, Toyota started a new car company called Scion. Scion wanted to promote and market to young people in a different way, and we’ve been working with them ever since.

What kinds of clients do you deal with?

Very nice ones! And ones that share the same passion and attention to detail about their brands that we do.

What does FRANK151 encompass now as a platform?

So, with FRANK, we publish printed books, we publish videos, we publish web articles and we also “publish” merchandise products and collaborations that we sell at retailers such as Zumiez, Collette in Paris and RSVP in Chicago.

Distribution is also key. We use our online and offline networks to get all of our content out to the right people. This has helped us grow outside of the US. Right now, we also publish in China and Japan. We have similar businesses running in those countries with plans to expand to others.

For print and magazines to survive in the modern era, how do they need to angle themselves?

Collaborating and curating are key. I still think that print is a novelty, but it also has a function. Anytime you have a novelty purchase that also has function, I think there’s something special there. Print is less important then any of the other social media outlets — social media can help build a brand that’s bigger than a website with largely-followed blogs.

Print is interesting because there’s an emotional brand affiliation there, similar to when kids used to roll joints on record albums. That’s some shit that sticks with you for the rest of your life. It’s tangible, it’s not just downloaded. If you can hold a copy of FRANK and use it for any other function, then it immediately becomes a part of a culture and community. Then kids will start wanting a FRANK ashtray. It’s becoming a love mark. You hold FRANK and touch it, and look at it, and you learn about the history of it, and the heritage etc., then I believe that it becomes a love mark when you actually see it, and it gives you a good feeling. I’m trying to make sure our YouTube experience is similar — we want our community to be excited by what’s next, and the unpredictability of it all.

Motivations and The Recent Best 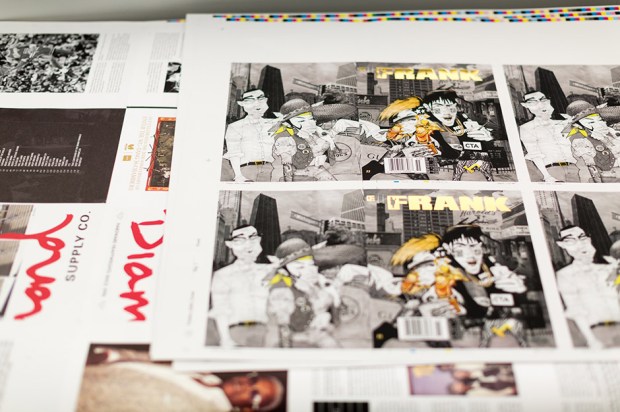 The FRANK151 brand has been around for 15 years. What keeps you interested and motivated in your job?

I heard some guy in an Oscar speech say something like this, and it stuck with me, “I try and look to the guy I’m going to be 10 years from now. That keeps me crazy motivated and when I get to be as old as he is, then I’m going to look to the guy I’ll be 10 years after that.” Therefore, I can never get comfortable; I will never stop learning and I can never stop being excited about being alive. Stevie Williams in an interview once told me, “If you look up to somebody, that means they look down to you, so I don’t look up to anyone or down to anyone at all.”

What was the most memorable meal you had recently?

Shout-out to Bugsy who brought over 15 pizzas to our New York office. He has Rizzos LES — he and Roxy Cottontail own it together; it’s a really amazing pie spot. From the BBQ chicken to the plain pie, margarita to the truffle pie.

What is your go-to for finding new music?

When people who are my age, critics and smart music people say they “don’t like something.” That’s what the fuck I’m listening to. The more they hate Chief Keef, the more I’m rockin’ him. I learned that from George Clinton. When his 13-year-old grandkid said, “I like this music grandpa, but my mom says it’s not good,” he said, “That’s what I wanna hear.”

What was the most interesting thing you read recently?

Cashew Company Journal, which is a bible for Atlanta culture. They were nice enough to put me down in it talking about the early days of starting FRANK in Atlanta. But it’s shot amazingly. The book profiles a range of people such as the ATL Twins, Dirty Doctor and Trinidad James. It’s cool, there’s a lot of good photos, pit bulls, flip-flops, Reeboks, strippers and gold teeth — shit like that.

What is the most difficult thing you did recently?

Getting my kids into a pre-school in Los Angeles.

For more on Frank151, visit the company website here.

Stephen Curry and Under Armour Announce the Launch of Curry Brand

The Game and Lil Wayne Pay Homage to One of Basketball's Greatest in "A.I. With The Braids"

Lacoste and Bread team up to produce a special edition of the Walsham Desert Boot. Constructed out
By Nate Bodansky/Apr 14, 2014
Apr 14, 2014
0 Comments
Tech

The Hundreds keeps the releases coming fast and furious this season with a slew of new arrivals
By HB Team/Apr 14, 2014
Apr 14, 2014
0 Comments
Music

After an eventful weekend at Coachella, the music news keep pouring in on this Monday morning. Here
By Petar Kujundzic/Apr 14, 2014
Apr 14, 2014
0 Comments
More ▾