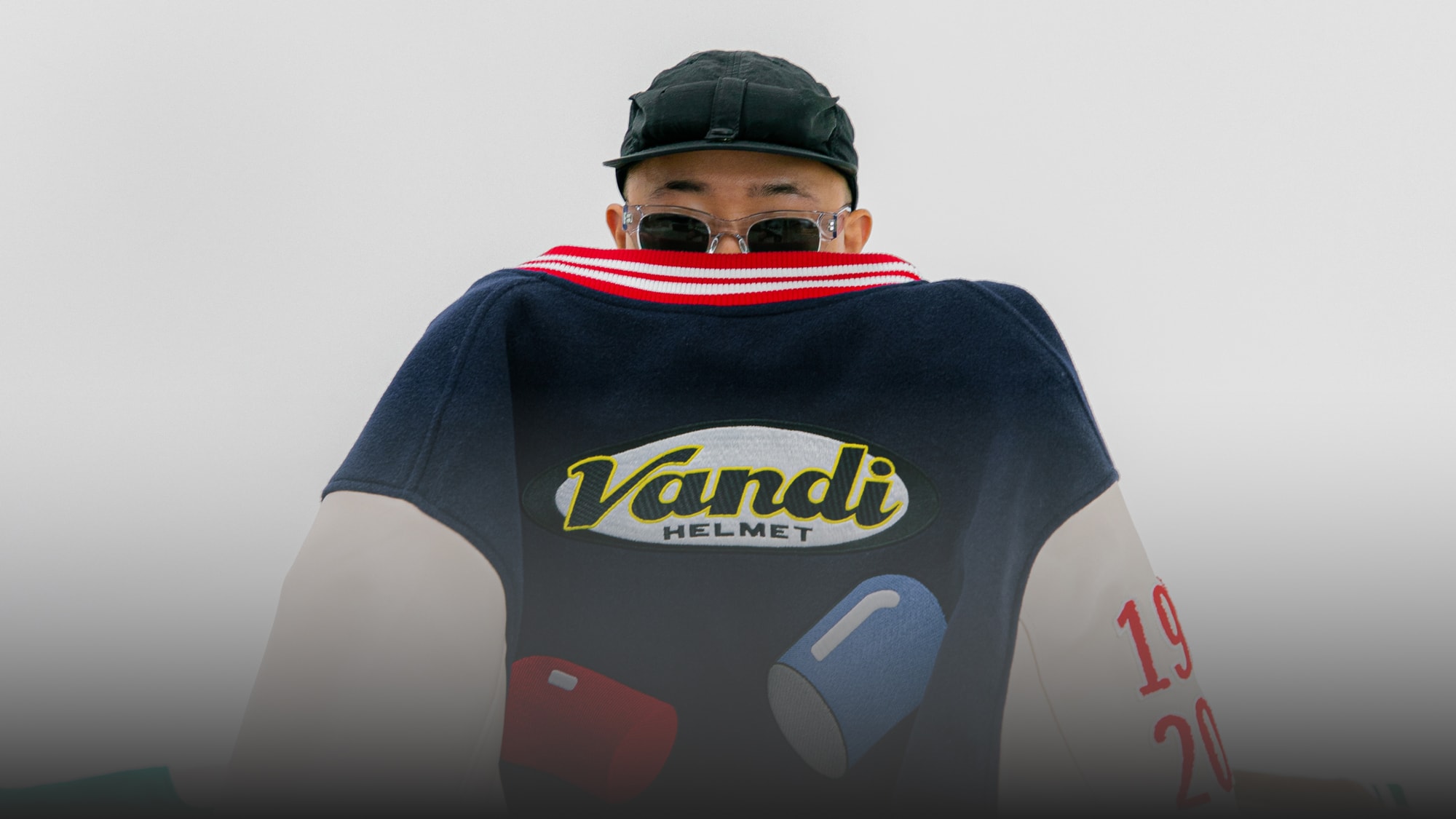 Where I’m From: Vandy The Pink Is a Creative Expression of its Founder’s Unique Experience
In a conversation with Dao-Yi Chow, the Korean-born, Virginia-based designer shares how his personal story informs his work.
Presented by Adobe

Vandy of Vandy The Pink lets his work speak for itself. The Virginia-based designer, born Junghoon Son in South Korea, prefers to stay in the background, oftentimes concealing himself behind his label’s fashion and footwear creations. In many ways, however, placing the work in front of the person offers more about the designer than a portrait ever could. Vandy The Pink is a singular expression of Son’s lived experience, a collection of memories, references and influences he has collected like souvenirs along his path, tinkering and toying with them until they become the playful, whimsical and brazen designs the brand has become known for.
Now a streetwear heavy hitter with fans like Billie Eilish and Blackpink’s Lisa and collaborators such as Hidden New York, Vandy The Pink became an internet sensation with his bespoke takes on sneakers and clothing, frequently reimagining luxury fabrics and motifs through his own, joyful lens. His love of the process took form while attending college at George Mason, after moving to the U.S. from South Korea. Working at a restaurant to pay his tuition, he didn’t have the money to buy fresh kicks, so he revamped them himself and convinced friends they were new before blossoming his talent into a dedicated customization craft.
The duality of where he was born and where he lives now plays out in much of his work. Take for instance, the name Vandy The Pink, a reference to his mom’s clothing shop in South Korea. On the other side, his signature food and burger motifs were concepted from the in-your-face glamorized marketing from fast food restaurants that’s impossible to miss in America. It is his ability to blend his own vision and influences into light-hearted, feel good designs that makes Vandy The Pink a standout among his peers.
In support of Adobe‘s Diverse Voices initiative and commitment to amplifying the stories of Asian and Pacific Islander creators, Dao-Yi Chow, the co-founder and designer of Public School New York, sat down with Vandy to discuss his pop culture inspirations, the importance of injecting fun into his creative output and the way passion fuels his work ethic. 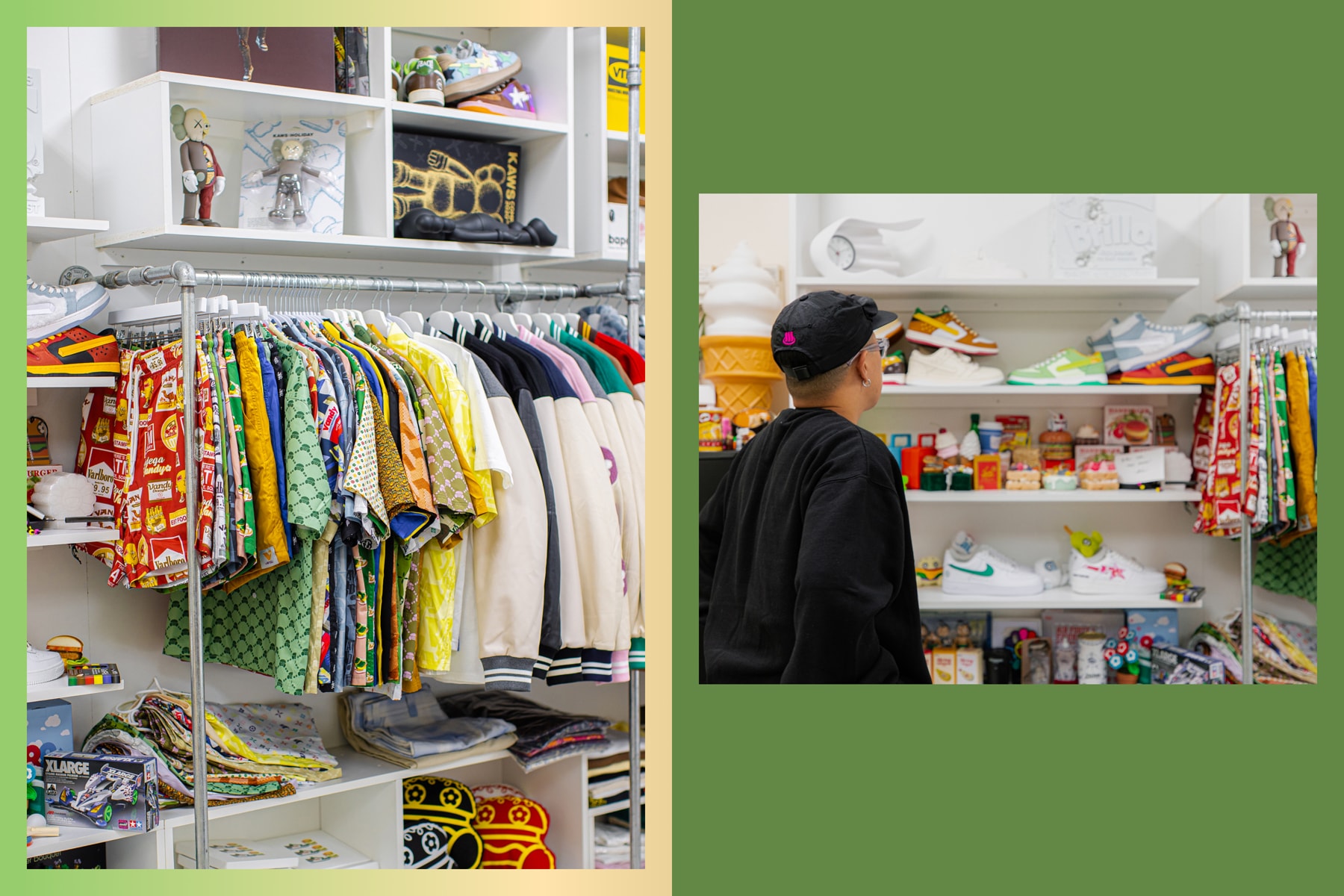 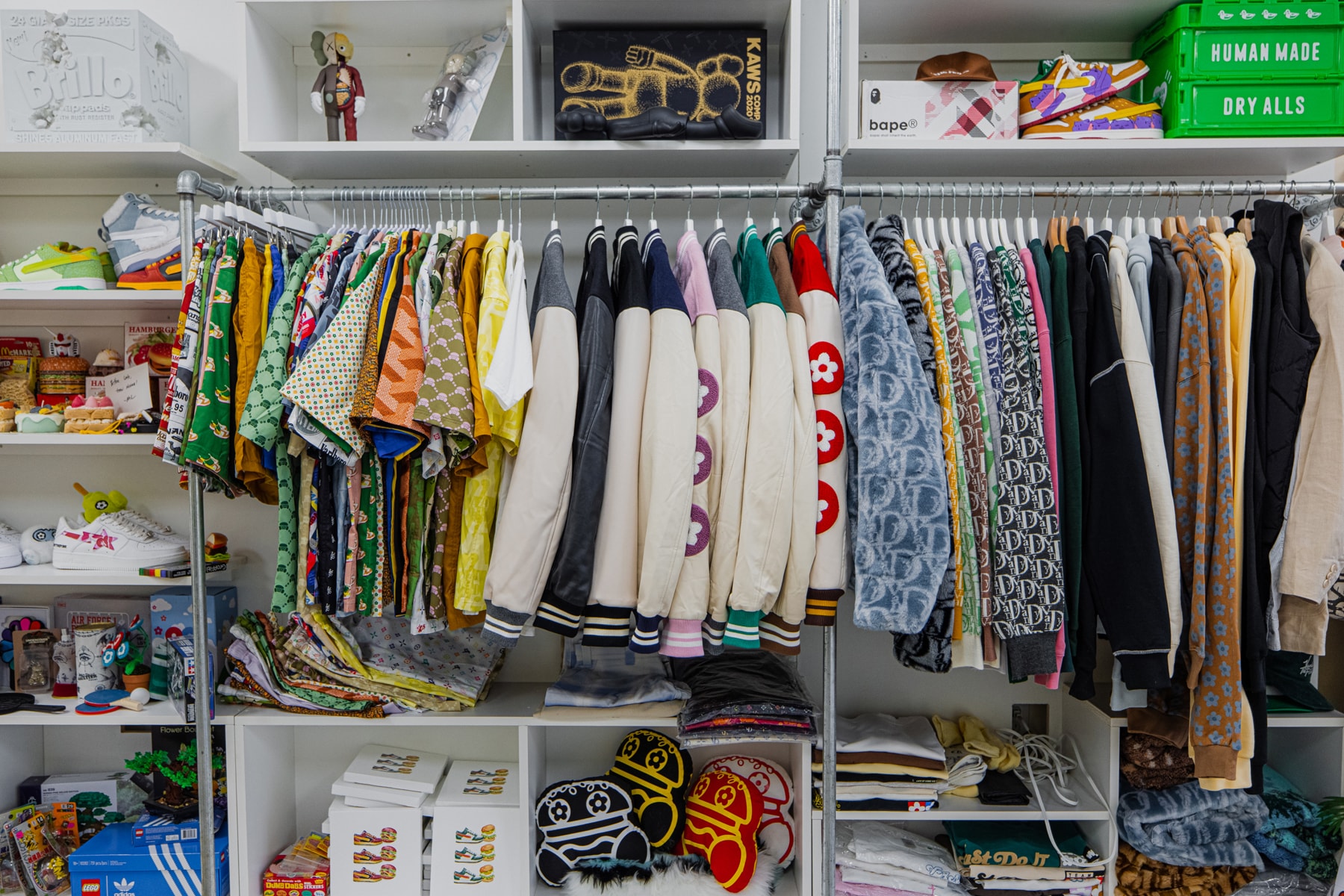 Dao-Yi Chow: When did you move from Korea to the U.S.?
Vandy: I was born in Korea and I moved out here when I was 18. I was about to graduate high school in Korea. I came here and they put me in sophomore [year], so I had to go all the way through again.
DYC: Did you speak English at the time?
Not really. We learn English back in Korea, but it’s not like we learn how to speak. It’s more trying to understand grammar. When I came here, I kind of could understand what people were speaking, but it just did not come out of my mouth.
DYC: To me, it makes total sense. My wife is from Hong Kong, born and raised, and she came over here for the first time when she was 28 and it’s the same thing. You take English in school, but it doesn’t translate one to one when you’re having a conversation. High school is probably your most influential years. That must’ve been an abrupt change for you.
To be honest, it was a really good experience. Plus, in Asia you feel a lot of pressure with your education. You have to get straight As or else you’re not getting a career, but here you don’t really feel much pressure compared to in an Asian country — and then you feel like you can do more. We get out of school at like 2:00 p.m. here, but back in Asia, I would get off literally at 11:00 p.m. Do your homework, sleep, wake up, go to school, repeat. But when I came here, I felt less pressure and I got to start spending more time on what I do right now.
DYC: You land in Virginia and you’re going to a new school, new language, new culture. You mentioned having a lot more free time, but what about the creative process drew you in?
It’s a little different from where other people started. For me, it was more like, I was really broke. I was in high school, then I went to college [at George Mason University], but my dad’s job didn’t go really well. I had to pay for my own tuition, for rent and everything. For me, it was really hard. I used to go to school and I had a part time job in a Korean barbecue restaurant. I had to take a semester off to make more money and then go back to school, pay the tuition. Then take a break again to make money, go back to school and then go back to the Korean barbecue, serving again. For me it was a very tough time, but at the same time, I couldn’t really give up on doing what I do. 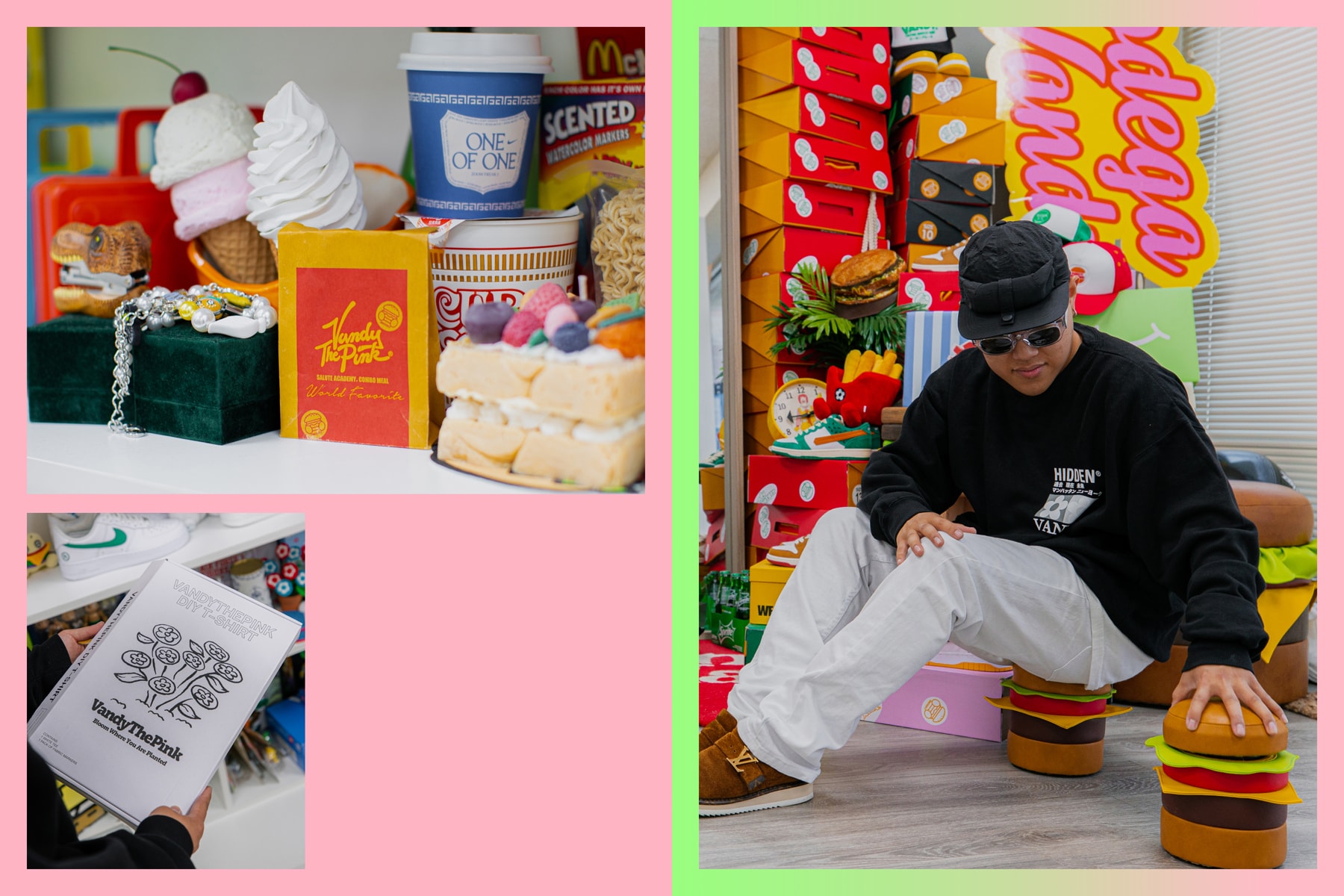 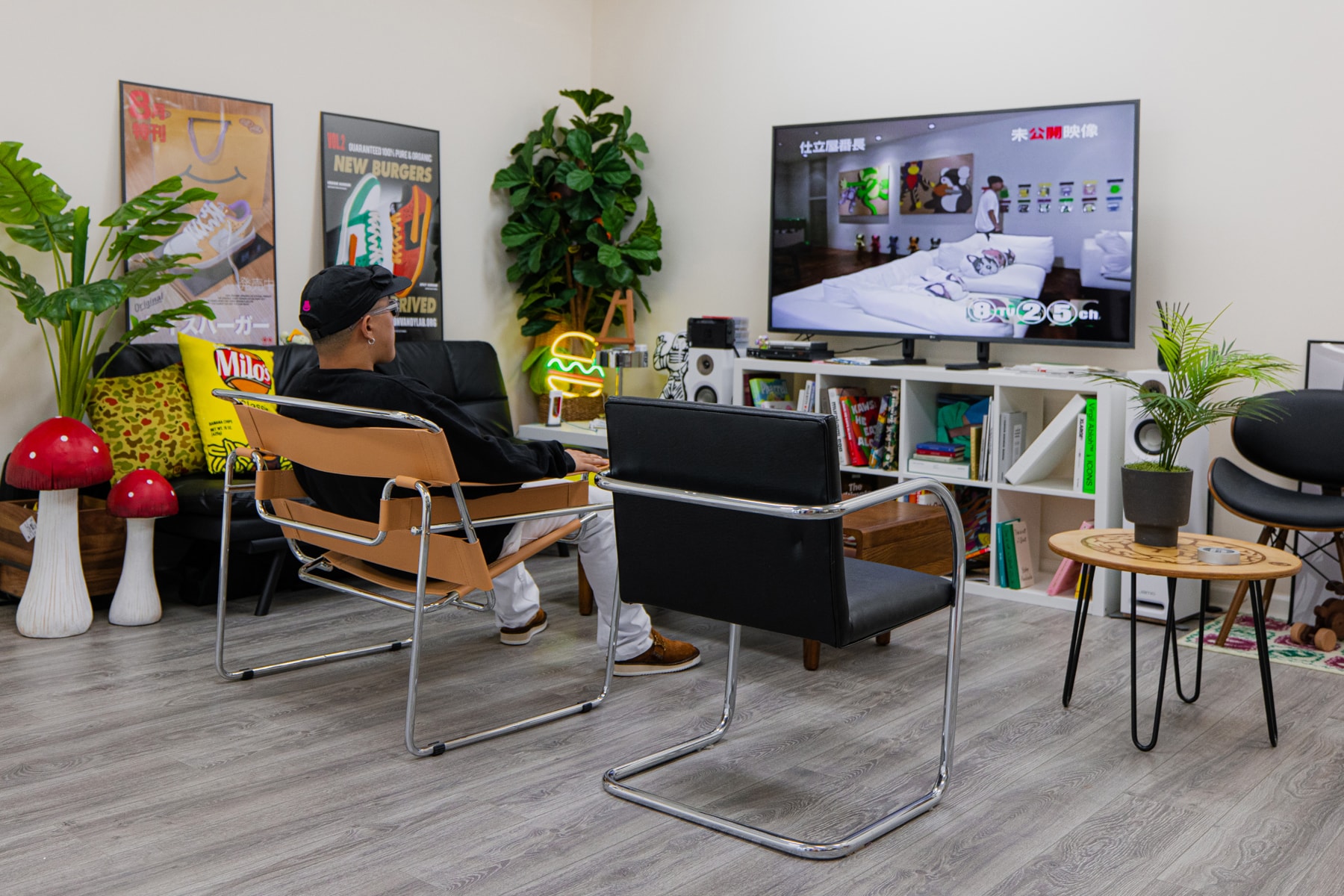 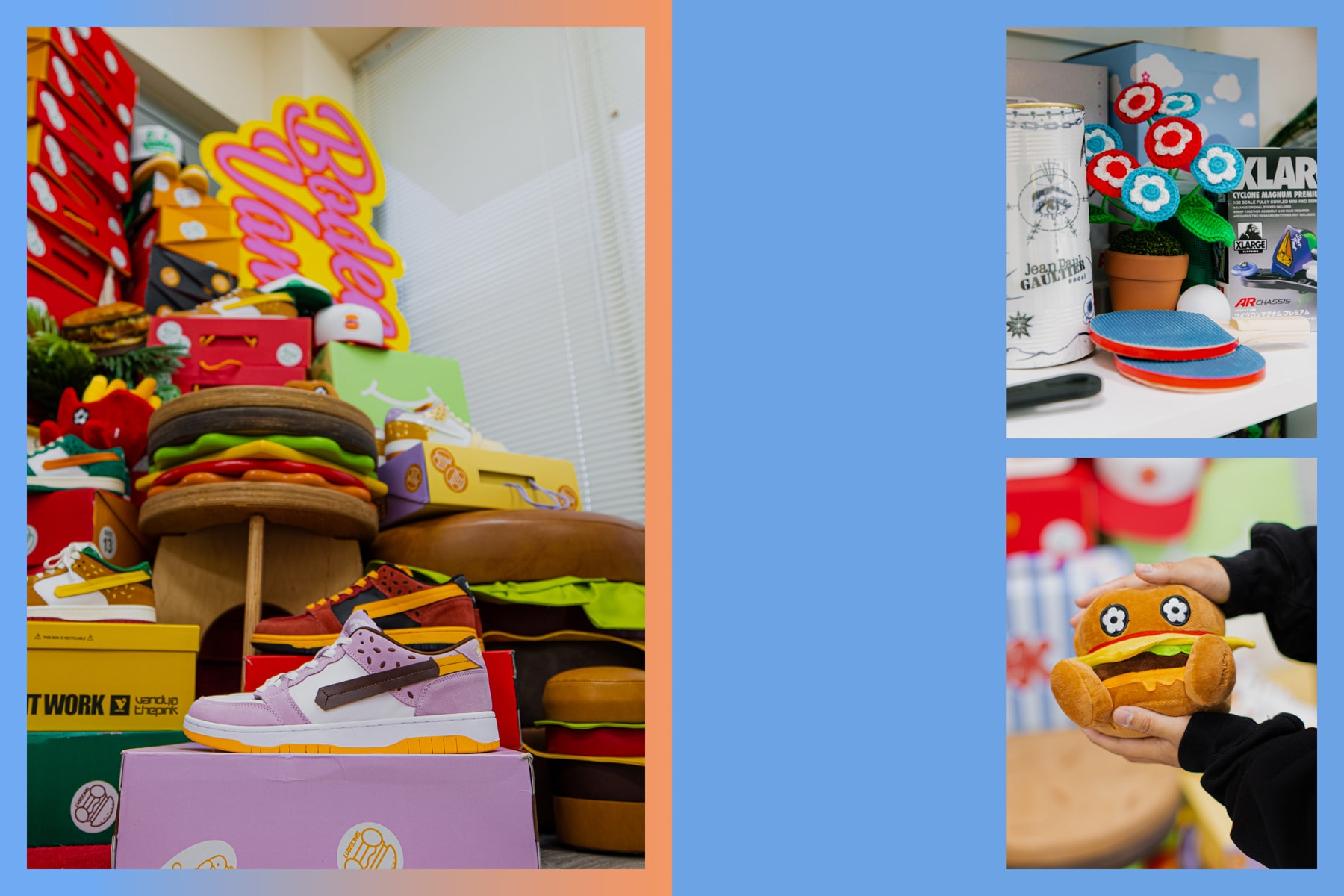 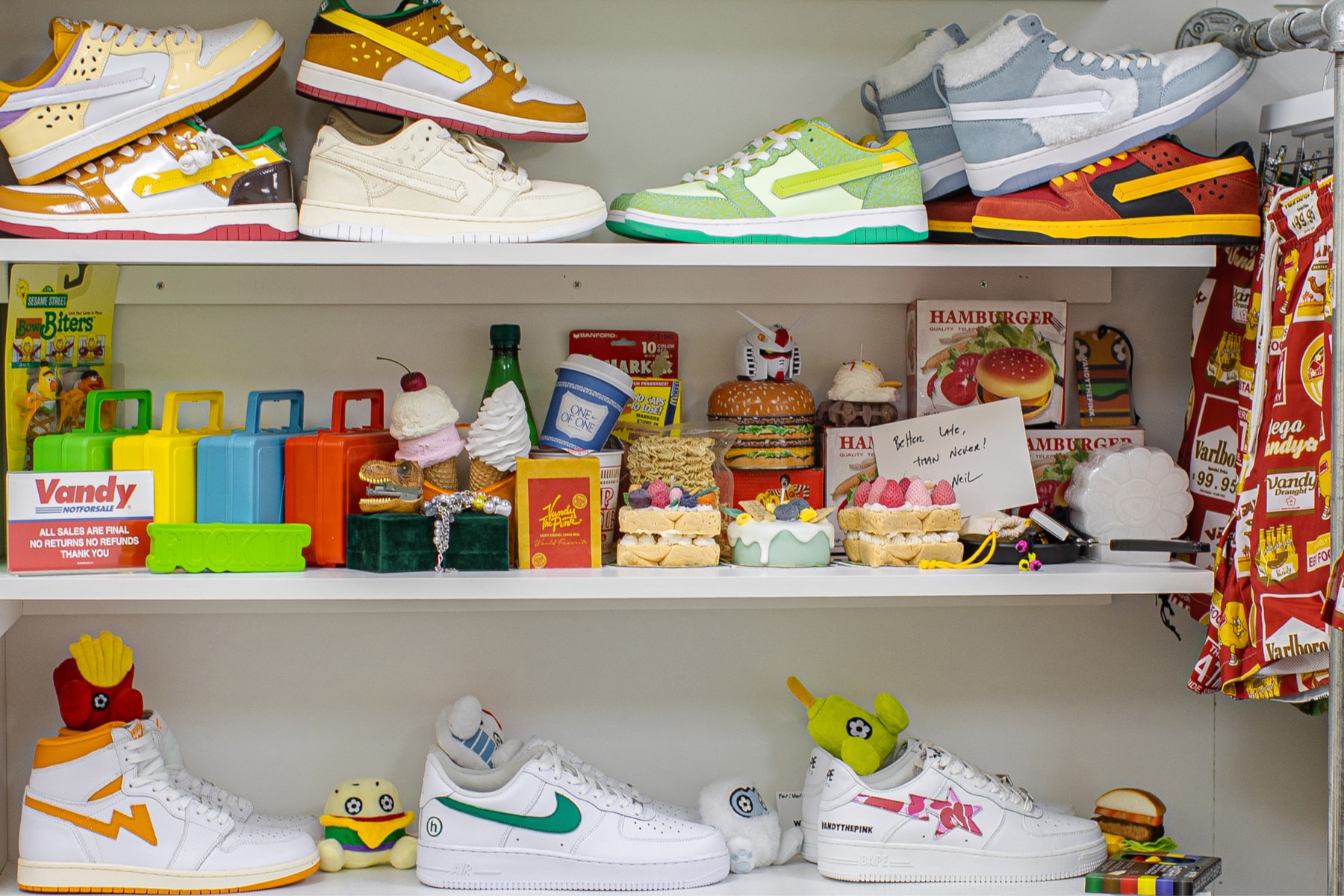 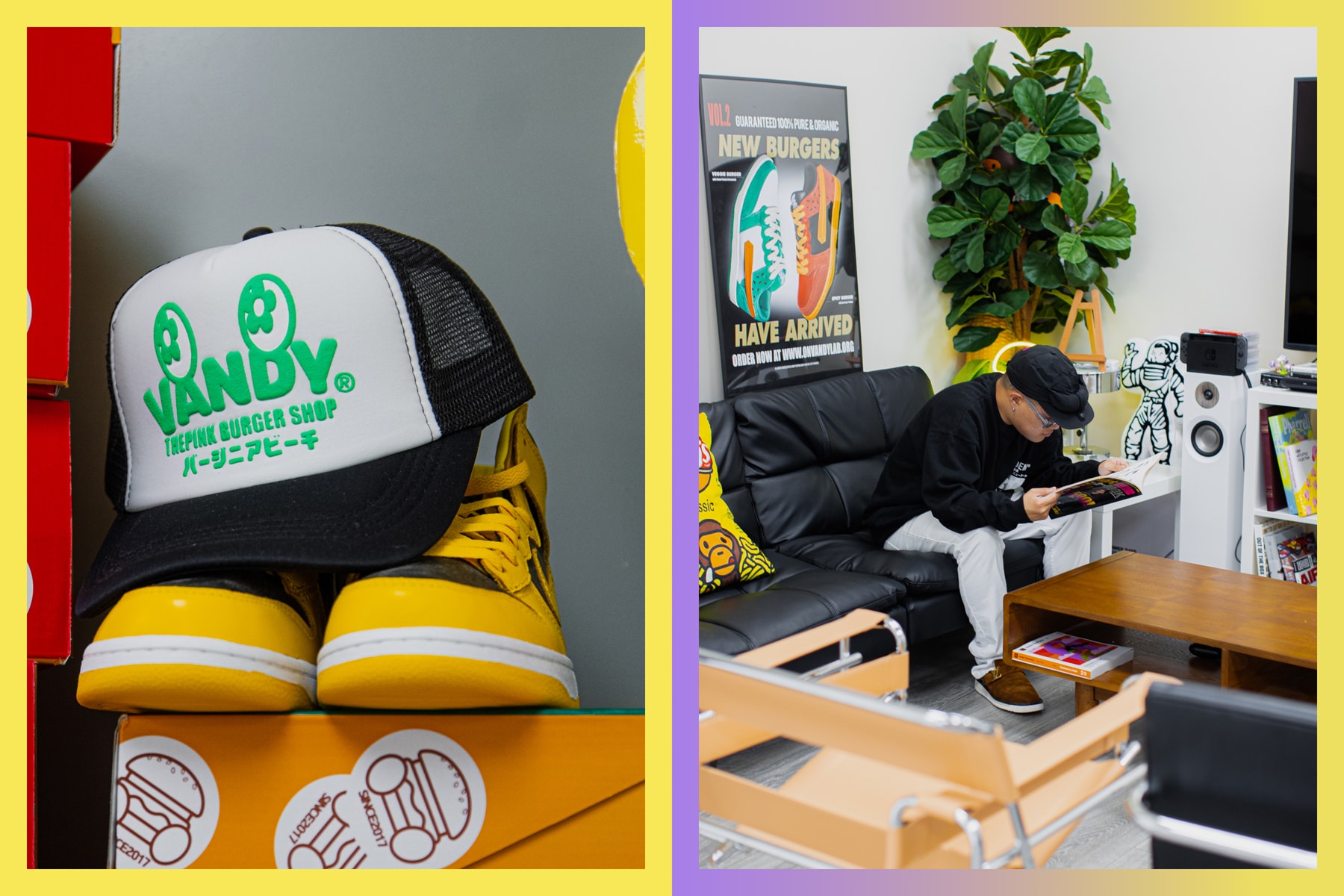 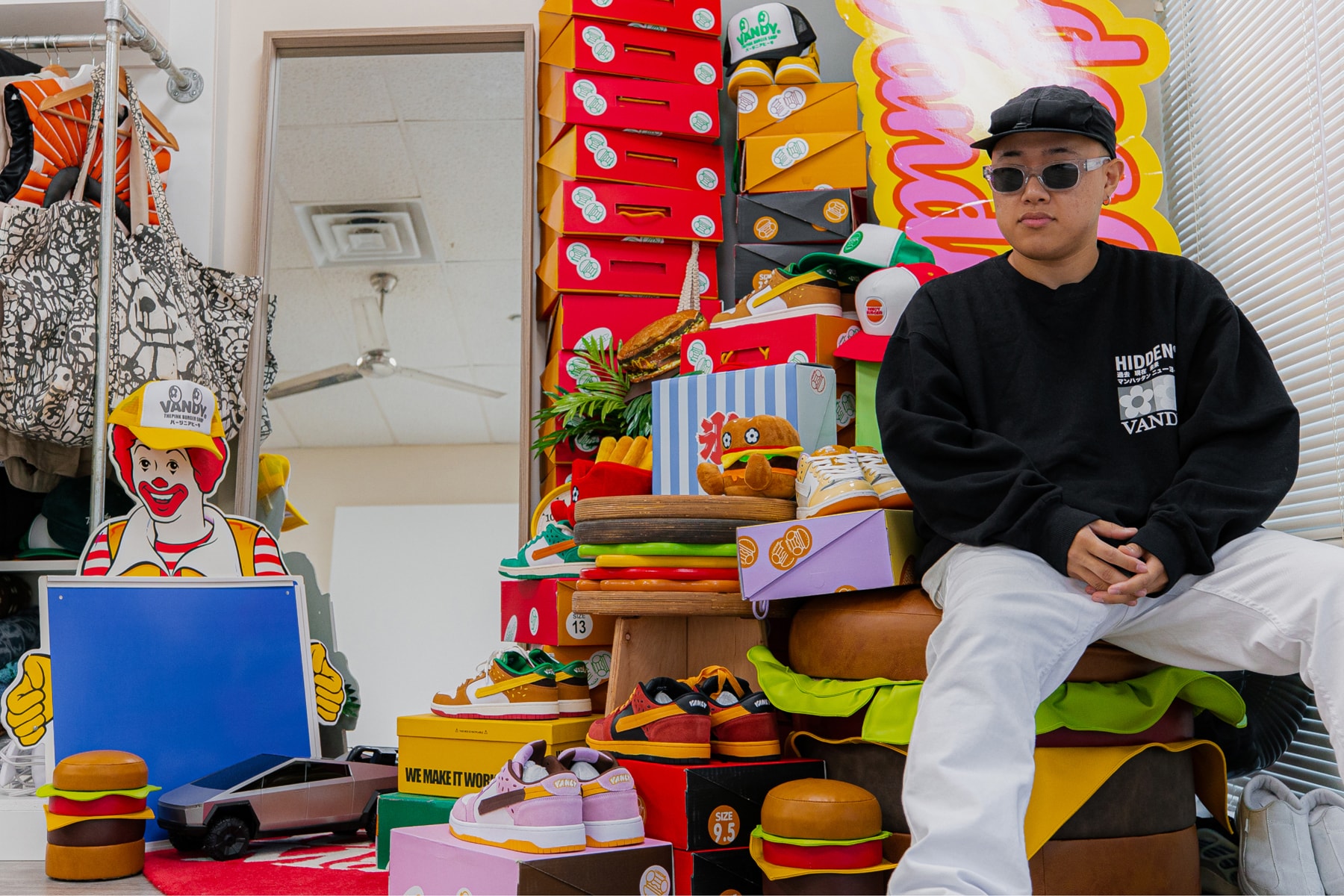 DYC: Can you talk about your early creative influences?
Every interview, I always say this one Korean rapper called Okasian. He was always one of my favorite rappers of all time. So I started to do the business and then I showed him a lot of my work through DM, but of course, he wouldn’t answer me. I would just keep sending. One day, I still remember, I came back from work, it was like 3:00 a.m., I was super beat, tired and then I check my DMs. Okasian answered me. That week I sent all the stuff out to him and then he actually wore the shoes that I painted on stage and he shouted me out on an [Instagram] story. That’s kind of my turning point because after Okasian, all the Korean rappers jumped on. Then, less than a month later, Tyga hit me up. That’s how I kind of grew fast back like four or five years ago.
DYC: Dope. Is there anyone now that you really want to work with, same way as back when you were DMing?
Oh, there’s a lot. There’s always my top one, top of the list, ever since I started my business, ever since I started my own brand. My top one is Nigo. Always Nigo.
DYC: Talk about the transition from starting out when you were doing a lot of customizing, a lot of reforming, to now, making your own stuff. Why was that an important move?
The first couple of years, I was fully focused on doing a lot of reform or custom stuff but, I started to think that it takes a lot of time. I can only finish one at a time. I used to buy a really old, vintage LV bags and then I would try to cut it up and put it on shoes and everything. The people really like it, but I’m starting to grow my own identity and my brand. I’m starting to do my own stuff.
DYC: It’s an opportunity to be able to do more and to be able to share with more people. What are some of your favorite things that you’re making right now?
I’ve been making a lot of toys, plush toys. I grew up with a lot of toys around me because my dad used to collect toys, too. That gave me a lot of influence. Toys are really fun and cool. It always reminds me of when I was a kid. I really wanted to have my people, my customers to have that feeling — they can remember when they were kids. That’s why I always try to make a toy, even a small one. When you buy my shoes, there’s a small toy inside.
“I really wanted to have my people, my customers to have that feeling — they can remember when they were kids.”DYC: It’s like a Happy Meal from McDonald’s. What are your plans are for the future?
For now, we’re really focused on doing more stable drops with the hit collections. We’re preparing for our first official collection for Spring/Summer 2022. It’s going to be more traditional compared to where we were at before, because we would just release and drop one thing per month. We’re trying to do more, let’s say, legit branding.
DYC: I think ultimately you will define what your brand means to people and not the other way around. I think that’s what makes Vandy The Pink so special, is that same energy, that same hopefulness. Can I ask one more fun question? I’m curious, because food is such a common theme in your brand, what’s your favorite food?
Oh, yeah. I actually love a lot of food, but right now, at the moment it’s omakase. I mean, burgers are always my number one, but right now, at the moment we’re really enjoying going to omakase.
DYC: That money is coming in good, huh? Switching it up from burgers to omakase real fast.
Through Adobe’s Diverse Voices initiative, the brand is expanding upon its longstanding belief that elevating and amplifying underrepresented talent is a cornerstone of the company and serves its community as a whole. Its latest campaign is a celebration of Asian and Pacific Islander creators showcasing the creative minds who embrace their roots and whose work is fueled by their one-of-a-kind experiences. HYPEBEAST in partnership with Adobe will continue our shared mission of uplifting and amplifying diverse voices across various mediums with a new initiative that shares the dialogue between the established and the emerging. For more from the series, check out Chow’s most recent conversation with Pattaraphan designer Nok Salirathavibhaga and stay tuned to HYPEBEAST for more.