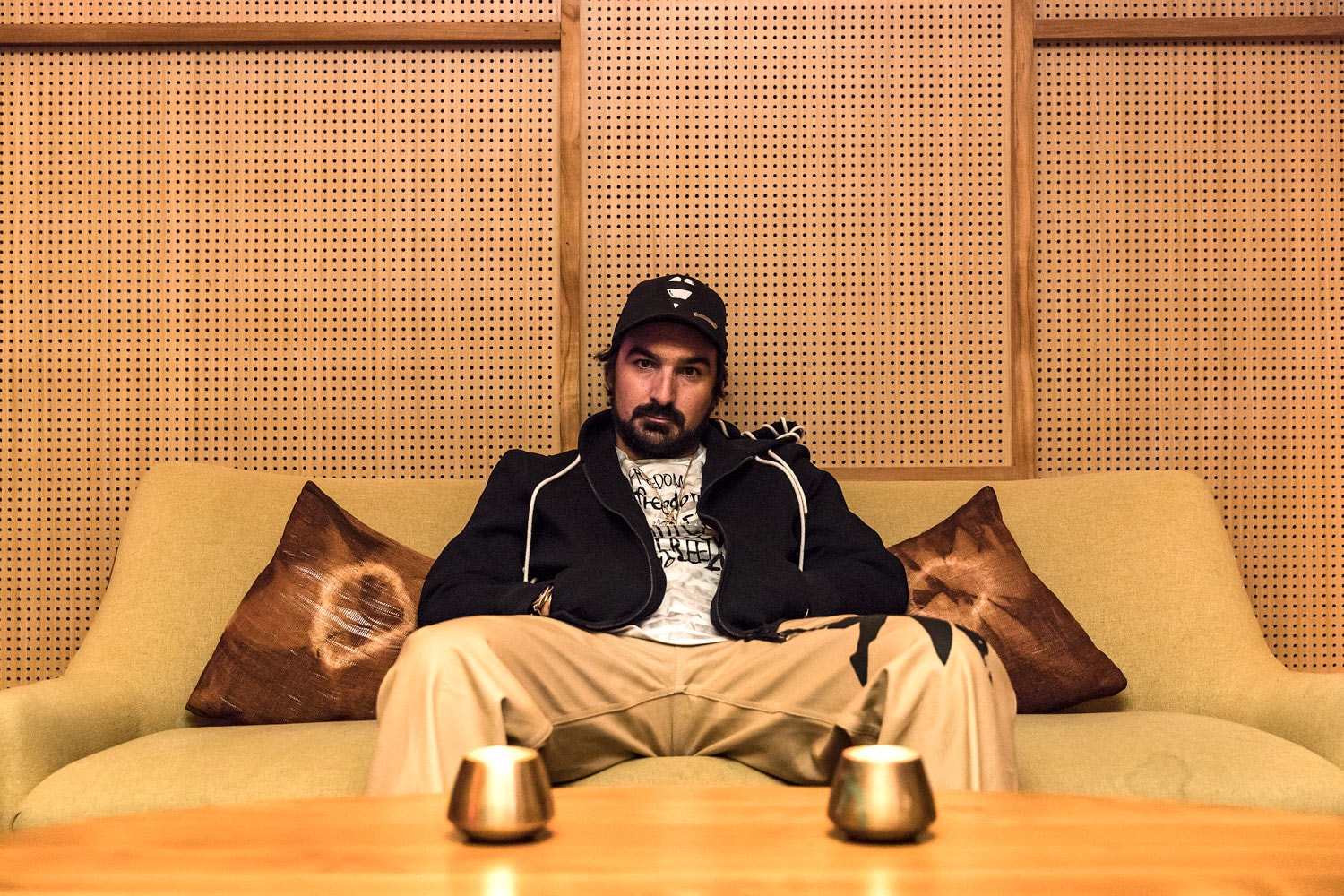 Palm Angels: A Conversation with Francesco Ragazzi
The cross-pollination between Milan and L.A.
By Charlie Zhang

“I like Carti because he has his own style” says Francesco Ragazzi, Art Director of Moncler and designer of Palm Angels. As of recent, Palm Angels’ signature tracksuits have been surfacing all-over social media with some of the most iconic rappers today like A$AP Rocky, Playboi Carti, Offset and even Travis Scott. But the origin story of Palm Angels stretches back to a single photobook of the same name. The book “Palm Angels” touched on the irreverent skatepark youth of L.A. Through Ragazzi’s lens, the photobook then progressed into the full-scale clothing brand that we’ve come to know. Today, we’re seeing a Palm Angels x Playboi Carti collaboration, and instances where almost all-too-often rappers show up in head-to-toe Palm Angels tracks. We sat down with the designer to talk about the origins of his brand, the changing DNA of the label and our exclusive Palm Angels Spring/Summer 2018 “Palm Island” Collection. 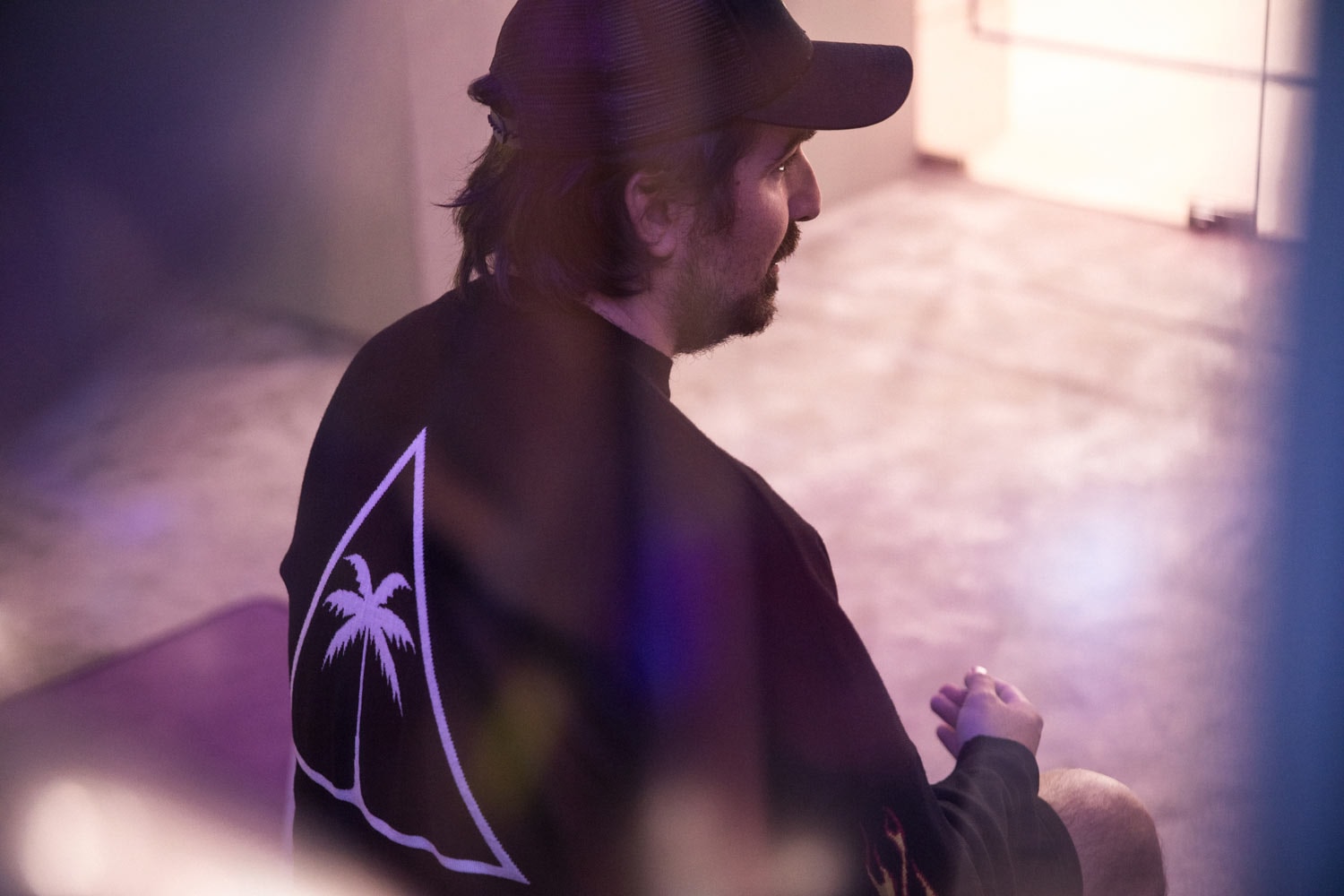 HYPEBEAST: What made you want to travel to L.A. in the first place?
Francesco Ragazzi: You know, it was like something I could imagine without actually being there. But when I got there for the first time it was really more than I ever expected. I remember coming out of the airport. As soon as I stepped out, I saw the sun and the palm trees behind it. I fell in love. It was really more than I thought it’d to be.
H: L.A. culture was the initial inspiration for Palm Angels. Have you experienced a new side of L.A. since then?
F: I think L.A. was the inspiration initially because I started the brand with photography, but I think Palm Angels has developed into something more. In the same way that I worked in the book with skateboarding and tried to represent it in another point of view, I’m trying to do that with American culture in general.“When I was younger, I really wanted to be a photographer.”
H: We’re really interested in finding out more about the younger Francesco Ragazzi. Looking back, could you tell us a little bit about the younger you, your journey into fashion and how you’ve come to identify yourself as part of the brand?
F: So I think the younger me is pretty much what I major in right now, you know? I live between the states and Italy. That’s really my background. Basically, the DNA of the brand. Mixing the two cultures, and seeing American culture from a different perspective. When I was younger, I really wanted to be a photographer. I’ve always wanted to work in fashion and one of the ways to do that was to be a fashion photographer. I studied photography but then it became kind of difficult to find the right internship, to find the right photographer to work with, etc. I was basically waiting to find a job. Then I started at Moncler at their press office. It was something that I never really liked, but you know it was the first thing I found. Moncler was still really small then, but I never left. Then I’d make my way to become the Art Director. And with the experience gained at Moncler, Palm Angels was born. I’m still working for Moncler as an Art Director, but I’m more of a consultant now. It was really organic and sometimes it’s very random. You know with my job, and how I wanted to be a fashion photographer. Now I work with the best photographers like Bruce Weber, Annie Liebovitz and Craig McDean, etc. 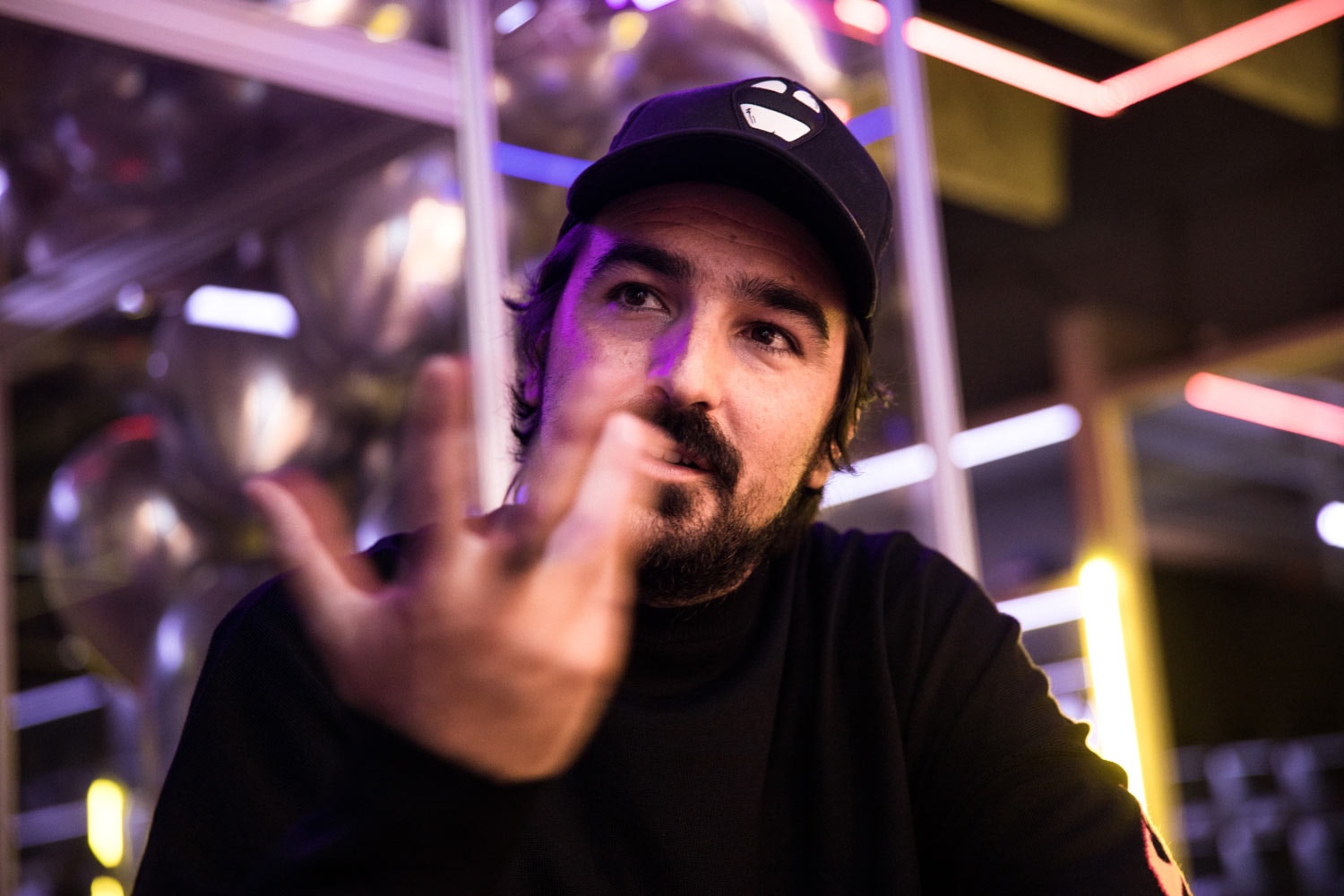 For Ragazzi, L.A. is just the starting point for the inspiration behind the brand. Another major influence is music and the burgeoning presence of hip-hop culture, globally. A good example of Ragazzi’s involvement in the music scene can be traced back to the conceptual Pharrell x Moncler bullet-proof vest. But Palm Angels is a curious synthesis between Ragazzi’s experience at Moncler and his intriguing outlook on American culture. The result is American streetwear that’s refined by the Milanese palette. In our recent lookbook, Smooky MarGielaa shows out in our exclusive Palm Angels Spring/Summer 2018 “Palm Island” Collection. 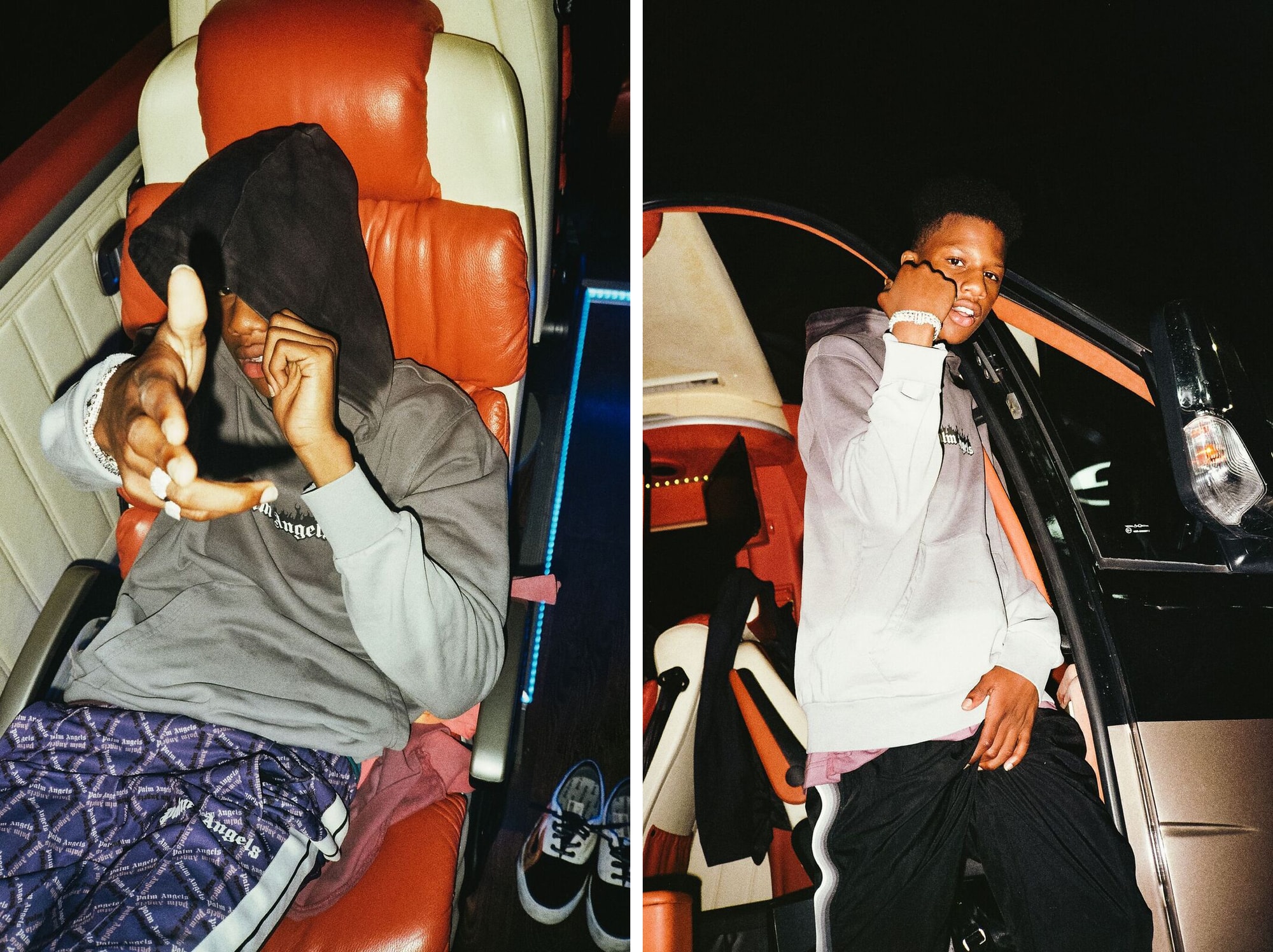 H: That’s really interesting how you started with photography because its all image-based, but then you’ve also talked a lot about the musical side of Palm Angels. For example Bob Marley, and how he’s an inspiration. Can you tell us a little bit about that?
F: To be honest, music, in general, has been a big inspiration to me. I always have like a muse. Often times when I try to design a collection, most of the time, there’s always a musician I have in mind, and one of the first collections I did was about Bob Marley. And you know, I tried to replicate that look and make it modern. For example, I remember making the tracksuit as it started from that collection. There was this picture of Bob Marley where he was wearing these green tracks. I really liked that look. Obviously, the tracksuit now is a big part of my brand. I’m happy that a lot of my inspiration started from musical icons though.
H: Speaking of the tracksuit basically, it seems like a canvas.
F: Yes, its exactly a canvas.
H: Do you think you’re still finding new ways to explore?
F: Here for the first time, I’m doing the nylon ones, which are more sporty. We’re also doing the Rainbow band — this is a tonal rainbow band. But you know it is a canvas. I can do it with all kinds of materials really, even leather. Its like I could never stop having ideas for the tracksuit, basically. 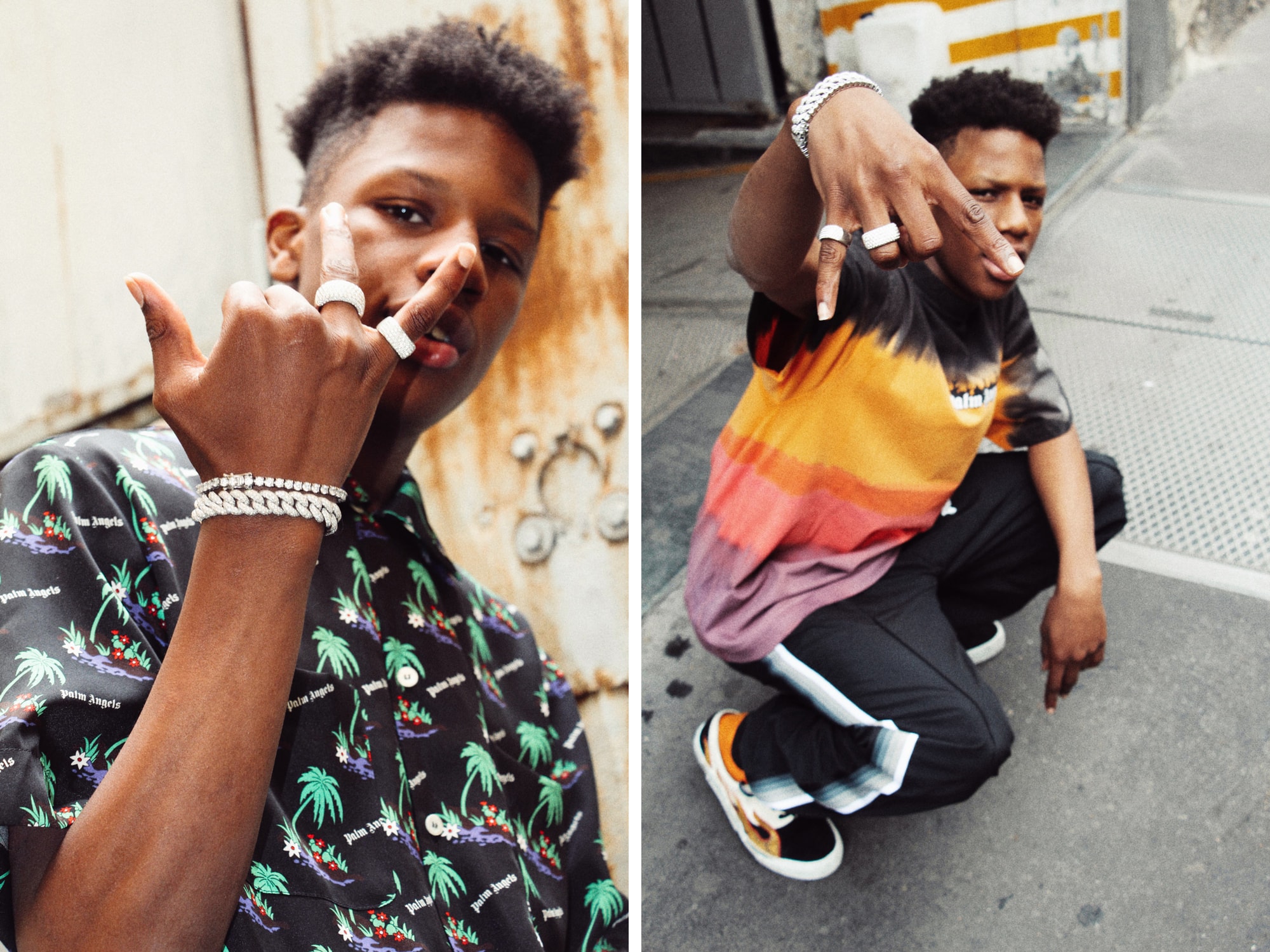 H: So you’re pretty involved in the whole process of everything, from design to social media?
F: Everything. From HR to Instagram… Everything.
H: What’s your favorite part of the process?
F: To be honest, the favorite part is coming up with the ideas. The most difficult part is to develop the idea. But I love ideation. It’s my favorite part. For example, it’d be like “Okay, let’s find out what should we do for this pop-up. What should be the set-up? What’s the collection?” I want to shoot out ideas, but then it takes time to develop them. 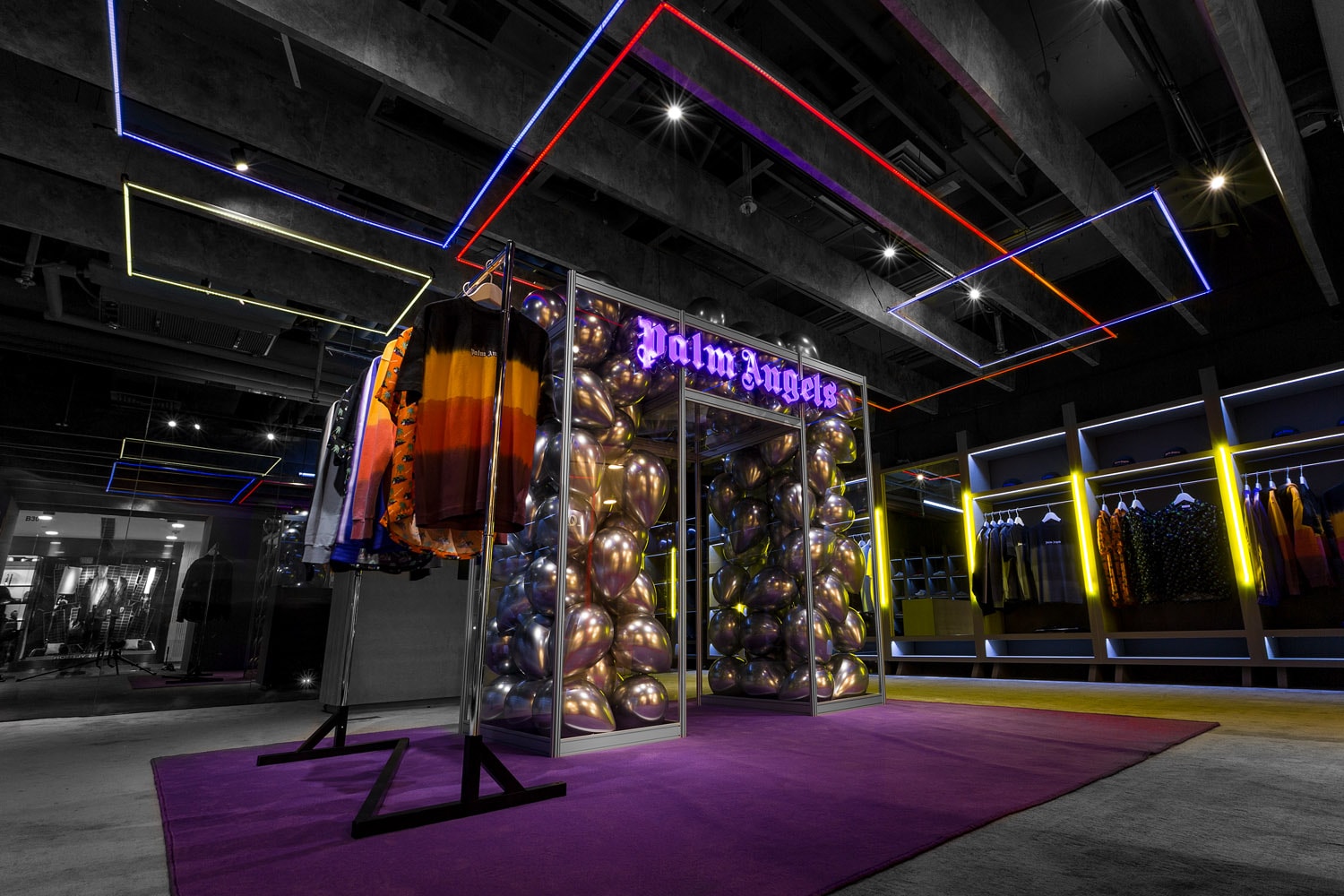 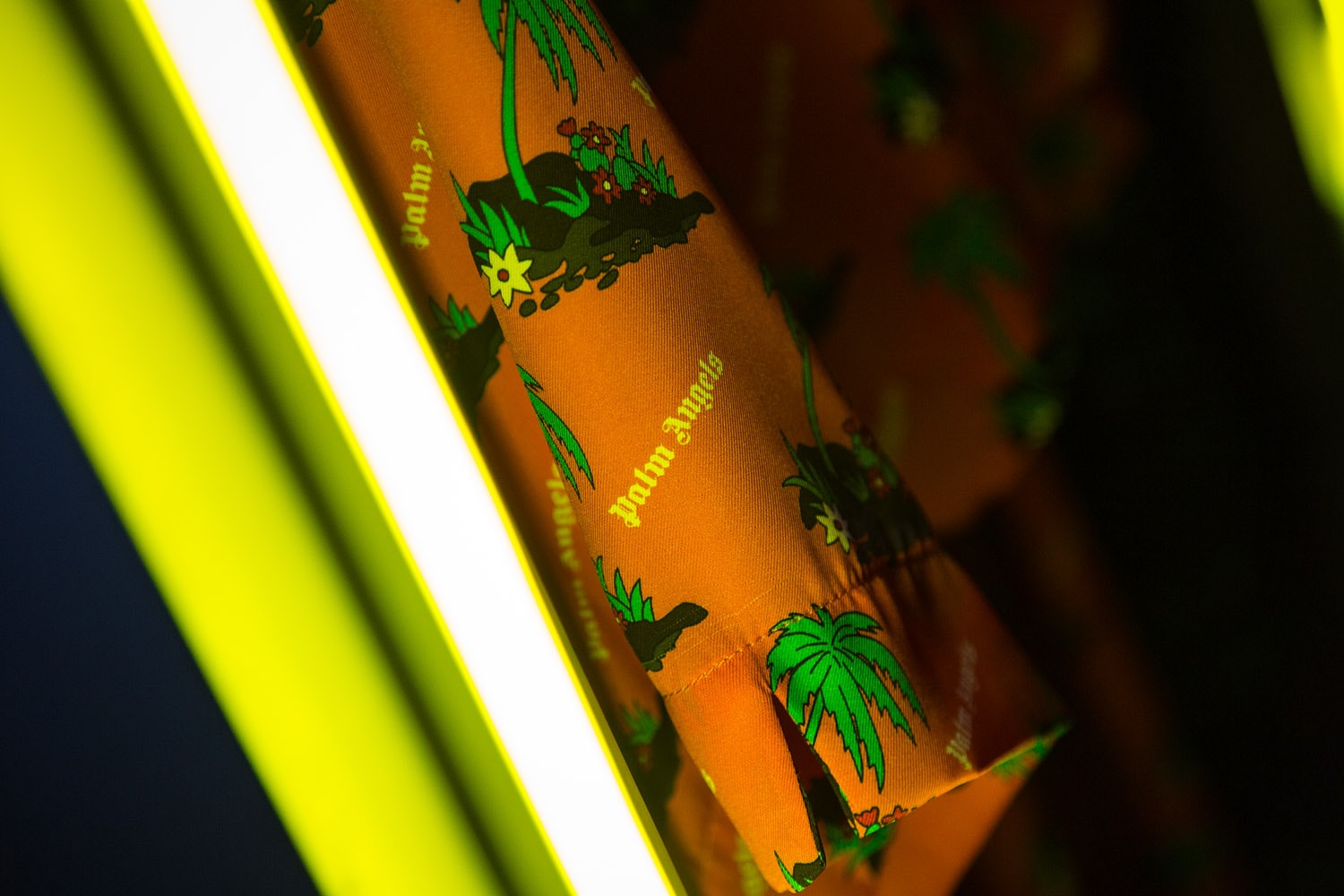 F: Our language! Like, “Pop-ups”. They’ve never done those stuff before. I mean, 4 years ago it was almost impossible to even think about. 4 years ago, if we’re talking about doing a pop-up with Louis Vuitton, it would’ve been impossible to even think about, you know? And just look at them now.
H: Even the terms.
F: Like “drops”. Like, “what are you talking about? You’re Louis Vuitton; you’re Gucci.”
H: They’re acting younger now.
F: Yeah and sometimes it doesn’t really feel authentic I think. But it’s kind of nice at the same time because it means that we’re doing something right. They want to go more our way to be a bigger, better brand, and they want to talk more like us.
H: Are there any rappers that you found out were wearing Palm Angels that you were really happy about?
F: To be honest, we were kind of early when we started. Before, the hype wasn’t really there. But now you go to Valentino, Louis Vuitton or even Moncler, everybody’s doing the tracksuit. I’m not saying that I brought the tracksuit back, but that was definitely part of it, you know? At my last show, at the end, there were about 20-30 looks with the tracksuit. But the very first person who started wearing Palm Angels was A$AP Rocky. He’s ahead of his time, so when I saw him I was really impressed.
H: How did you meet Pharrell?
F: Through Moncler. When I worked on the Pharrell x Moncler project. I mean he’s a friend and a super great guy. He was part of the Palm Angels crew, it’s all inspired by Pharrell, man. I even have this tattoo. 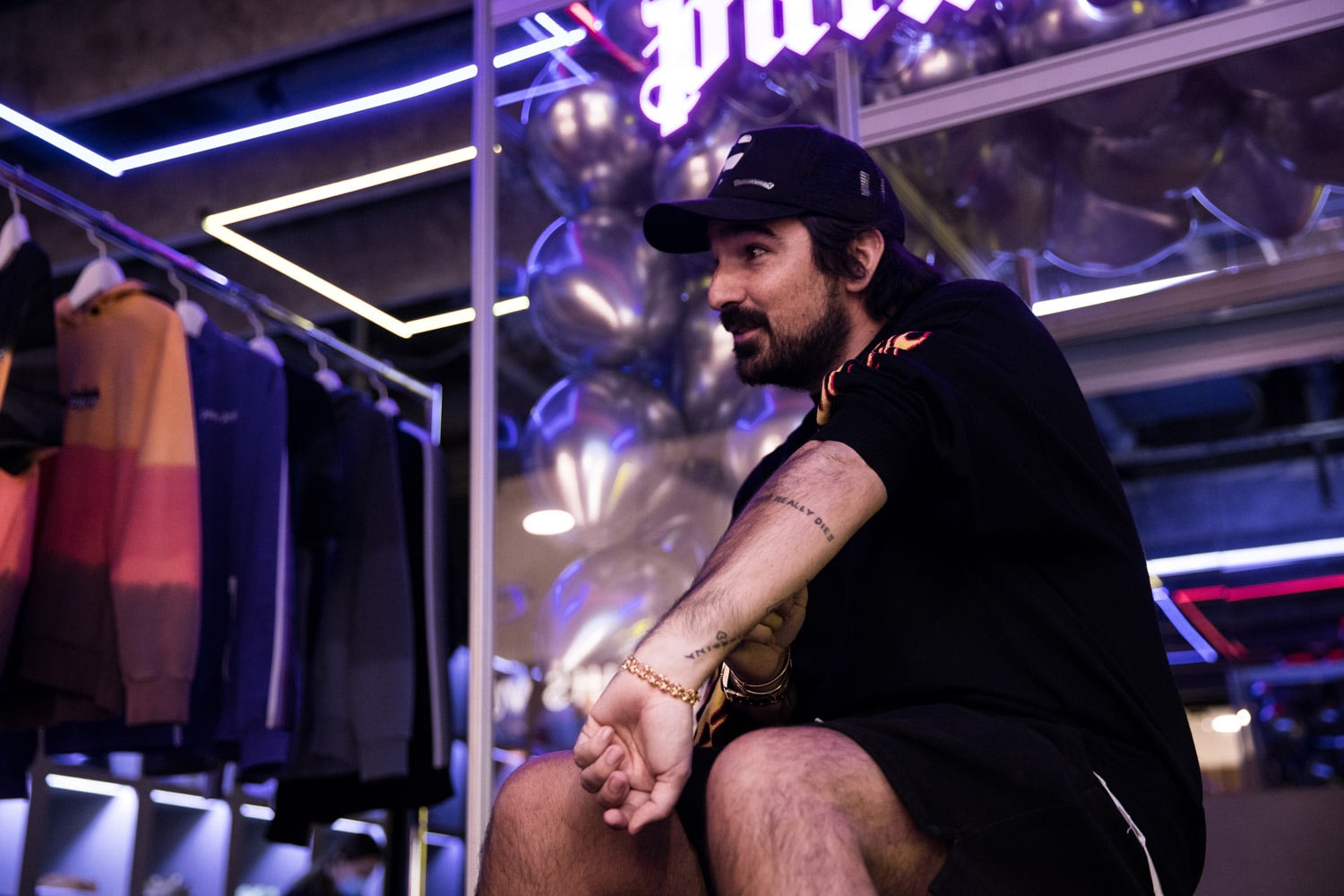 “NO ONE EVER REALLY DIES”
F: And when I showed him… You know when you have your muse or like your idol, and then you get to work with them? It’s pretty incredible.
H: How did you land on the name of the exclusive collection, Palm Island?
F: It was named after the print from the collection. You can see it here. There’s literally a palm tree on an island. 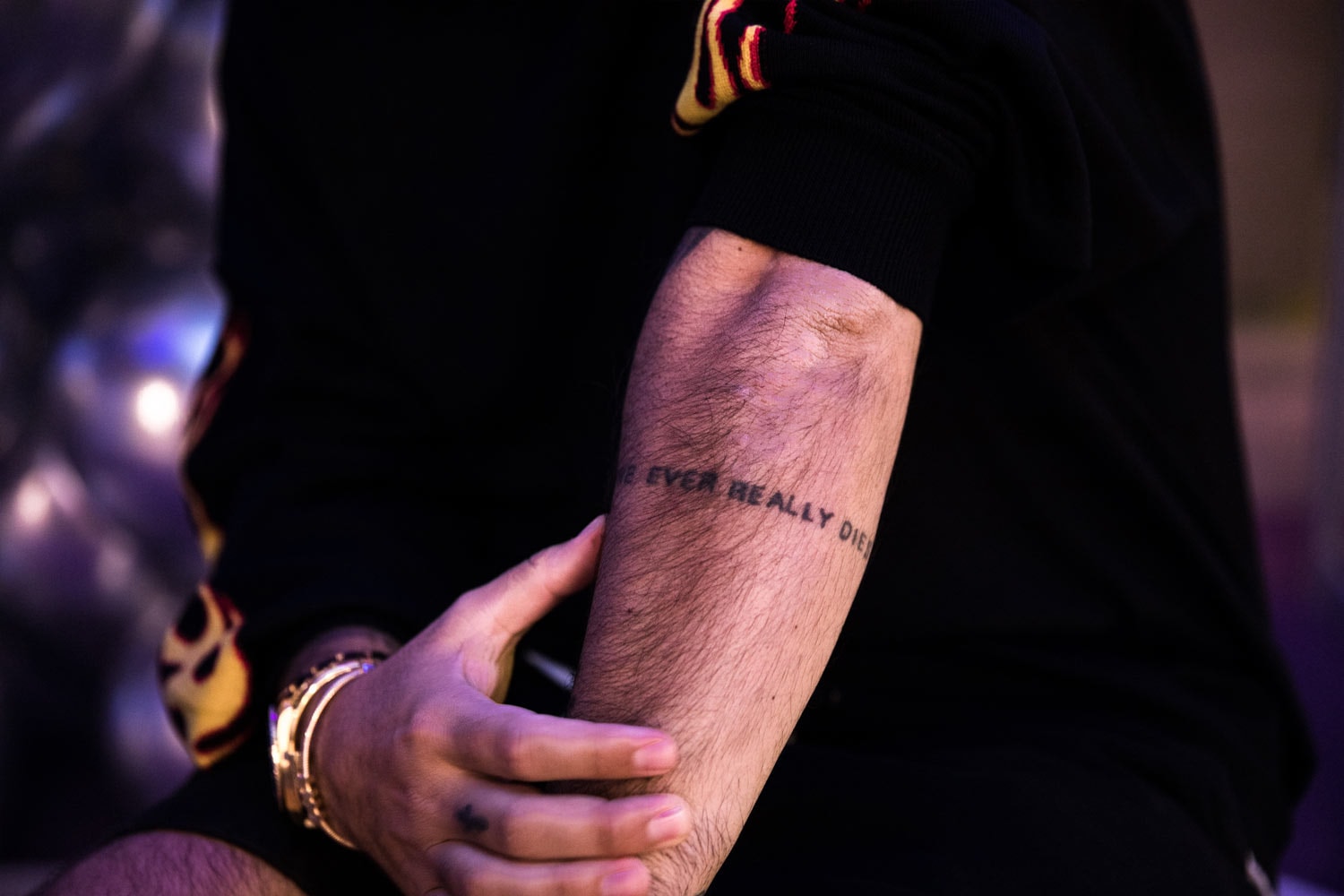 H: When designing obviously a lot of it comes from personal taste and style. Do you find that sometimes that clashes with what you think people might like?
F: To be honest, when I first started Palm Angels it was more about impressing, but not necessarily in a commercial way. I asked myself “Would I wear this?” And at the beginning, the answer was “no”. So then I started thinking, maybe the direction should say something more about where I’m coming from. That’s basically where it really started. When I started making things that I would actually wear. I think it’s important for these things to be a part of you. People might like or not like it, but it’s me. If you don’t like it, you don’t like it. When I started connecting the dots, I realized that I was the DNA of the brand. It’s exactly what I did with the book. I tried to see skateboarding from a different perspective, and now I’m trying to see American culture from a different perspective, but I’m Italian. You know?
H: What’s next for Palm Angels?
F: When I work on a few other collaborations I think. My goal now is to build Palm Angels into a lifestyle. I’m launching a new collaboration in June for my show. Doing it with Underarmour. It’s going to be big. I mean, Rocky just did the shoes.
Our exclusive Palm Angels Spring/Summer 2018 “Palm Island” Collection takes to vibrant bleaches and bold logomania informed by Ragazzi’s latest design cues. The concise line-up showcases a range of multi-bleached T-shirts and hoodies, short sleeve button-ups with the all over “Palm Island” print; and the Rainbow tracksuit. The tracks are constructed using nylon material emblazoned with gradient side stripes. Other items like swim shorts, belts, caps, and socks round out the collection. To recount the inception of Palm Angels is to peel back the layers of how Ragazzi slowly carved his way into the cultural landscapes of American streetwear. But what’s exciting is the transatlantic cross-pollination between Milan and America, at a time when the world has never been more influenced by streetwear and hip-hop culture.

This story was originally published at the HBX Journal