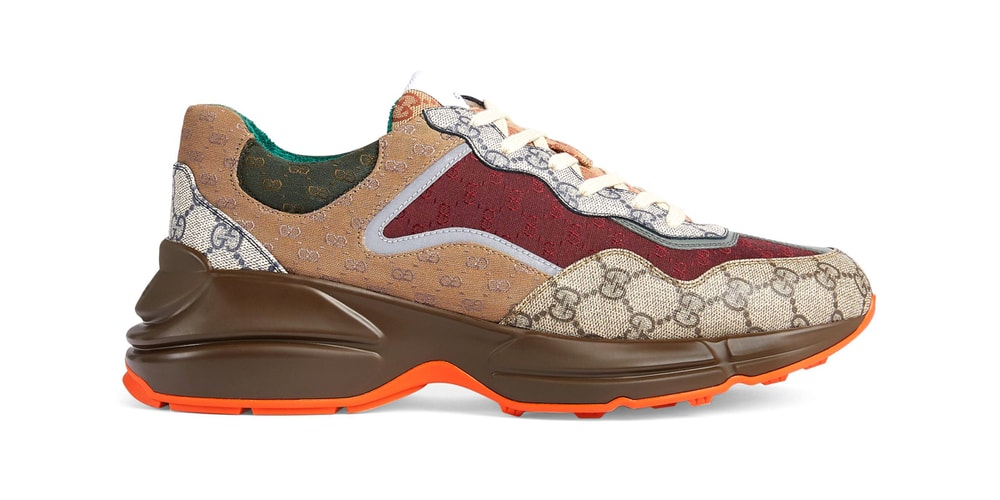 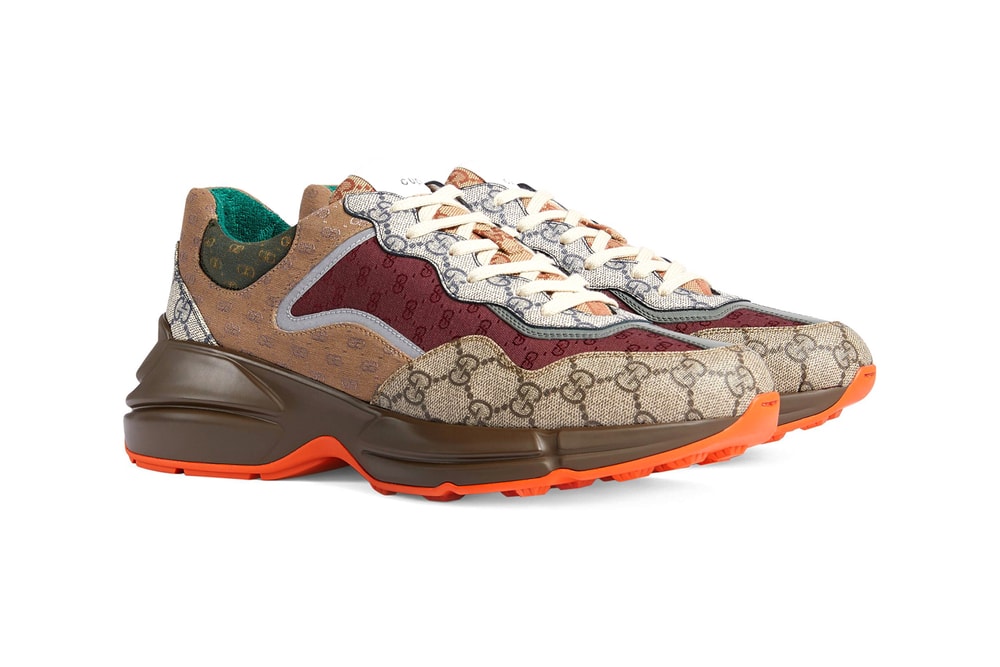 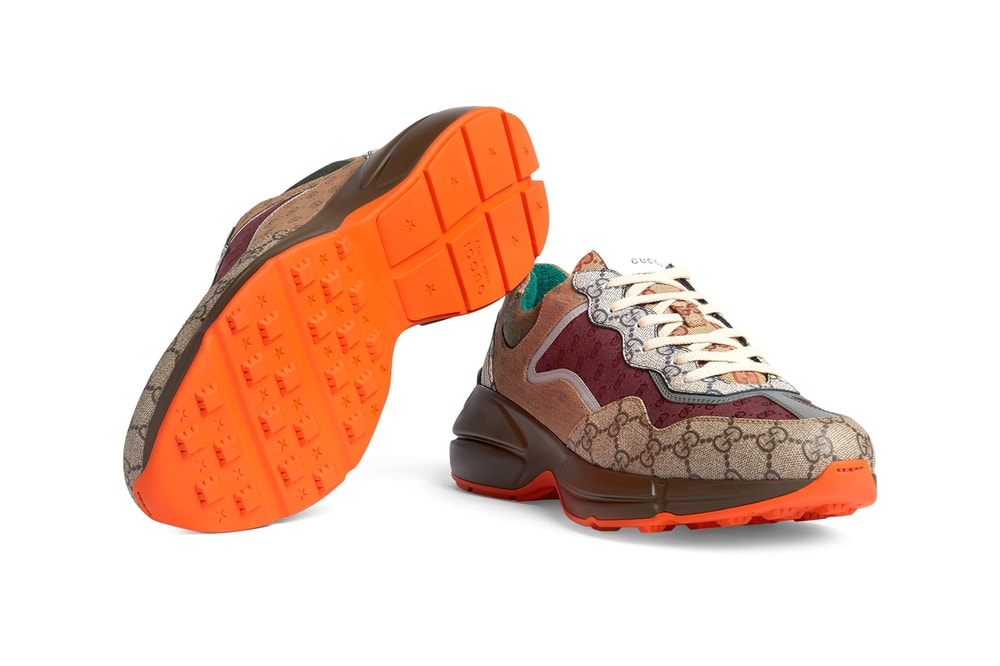 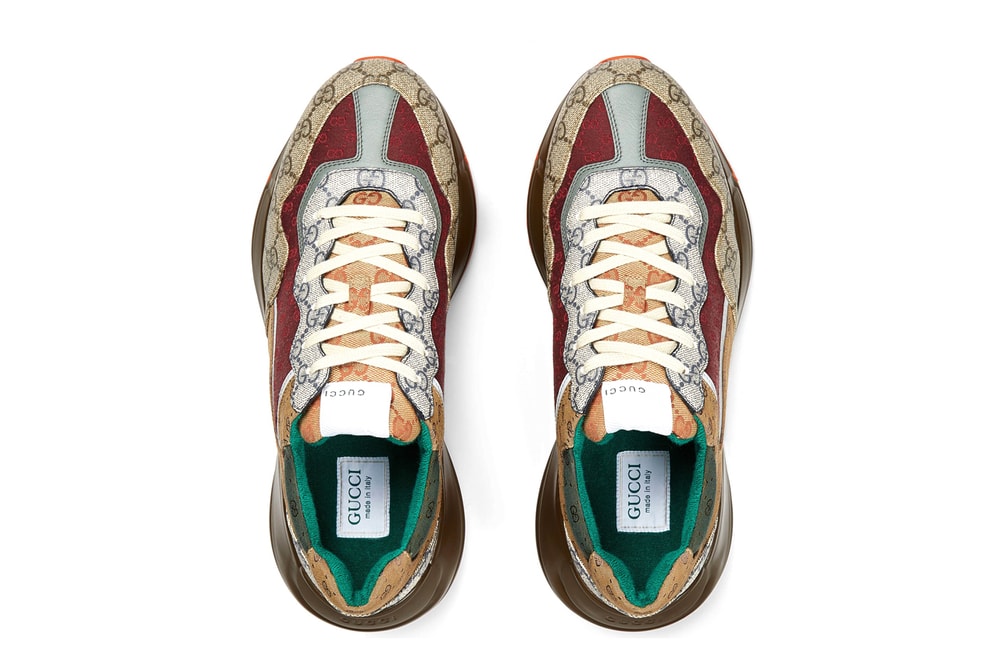 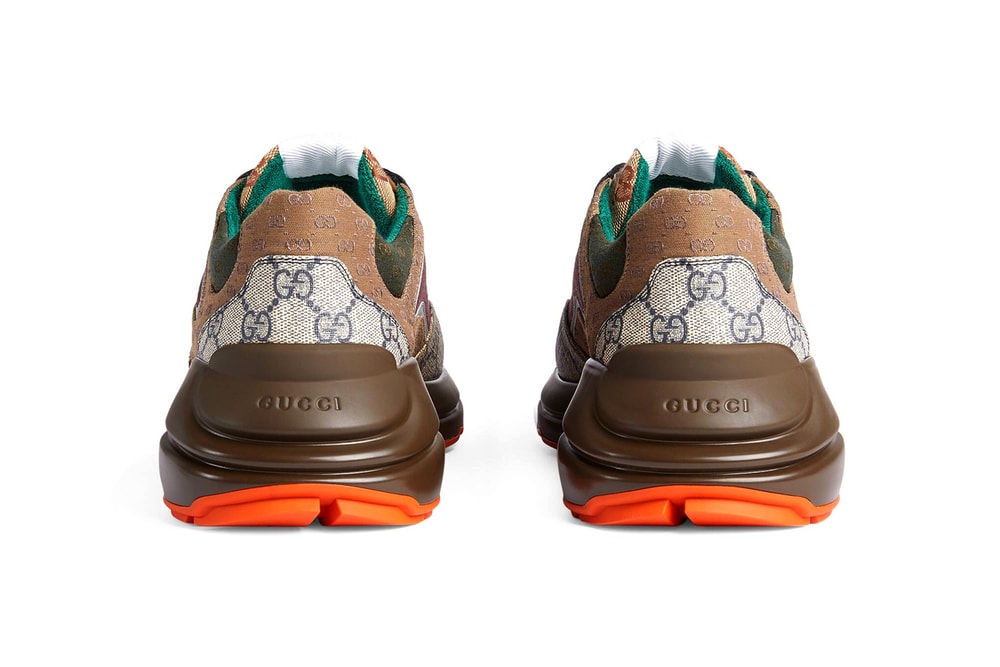 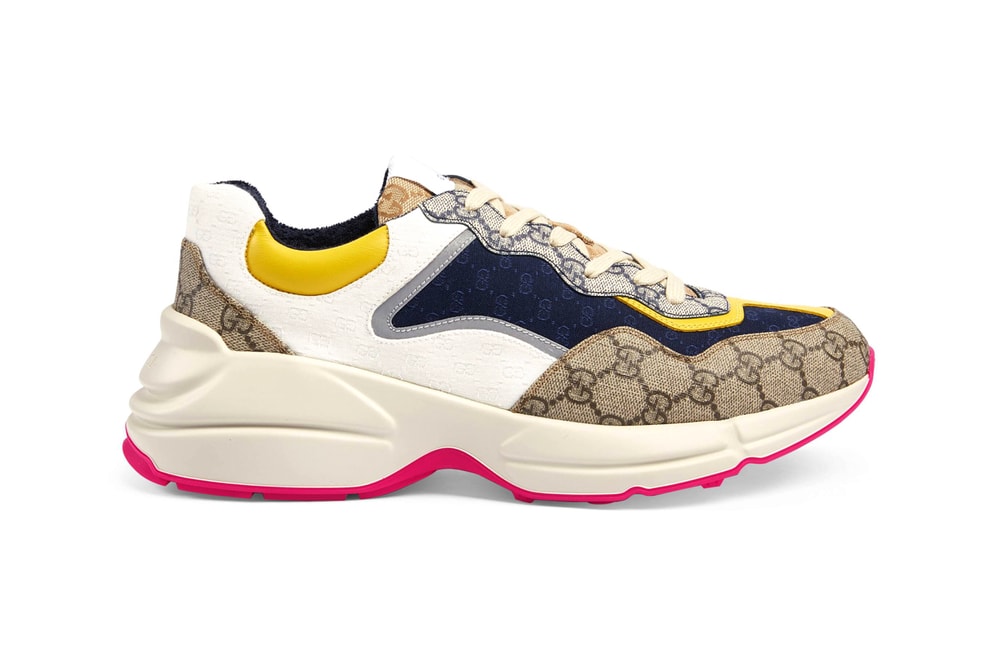 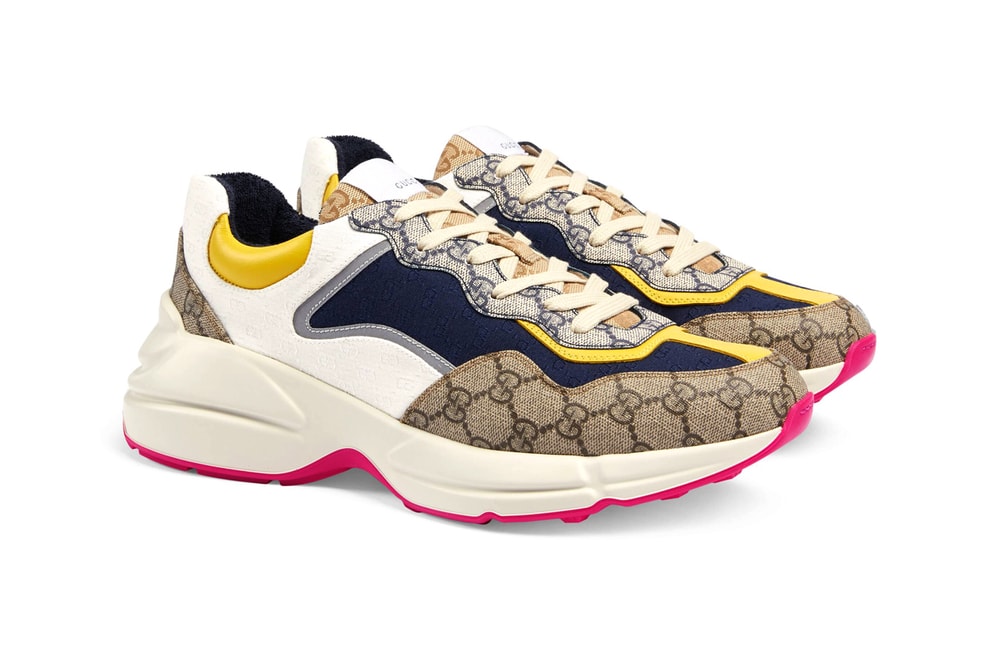 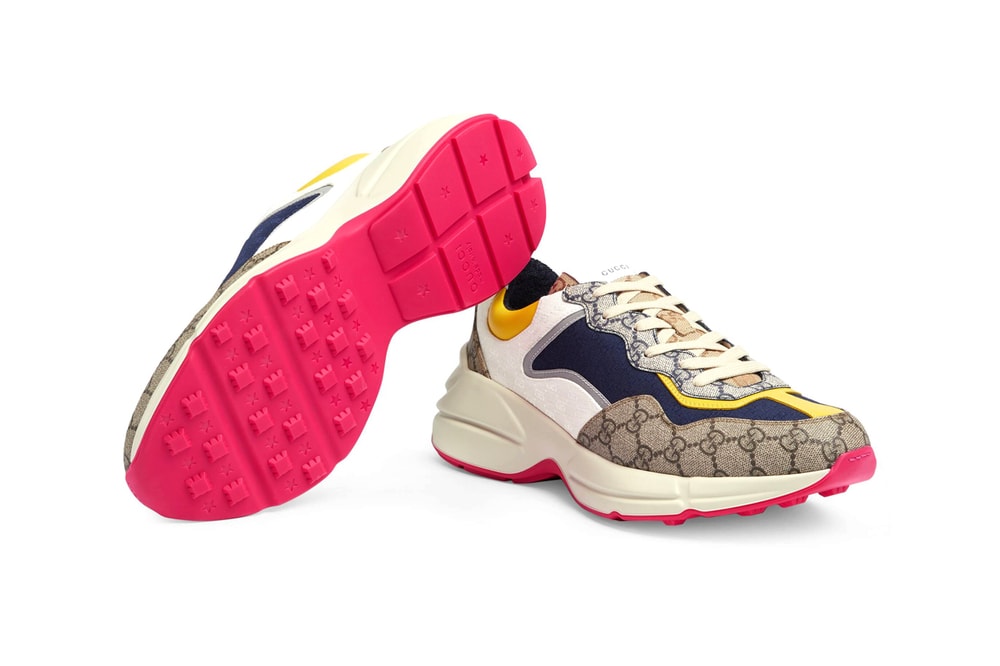 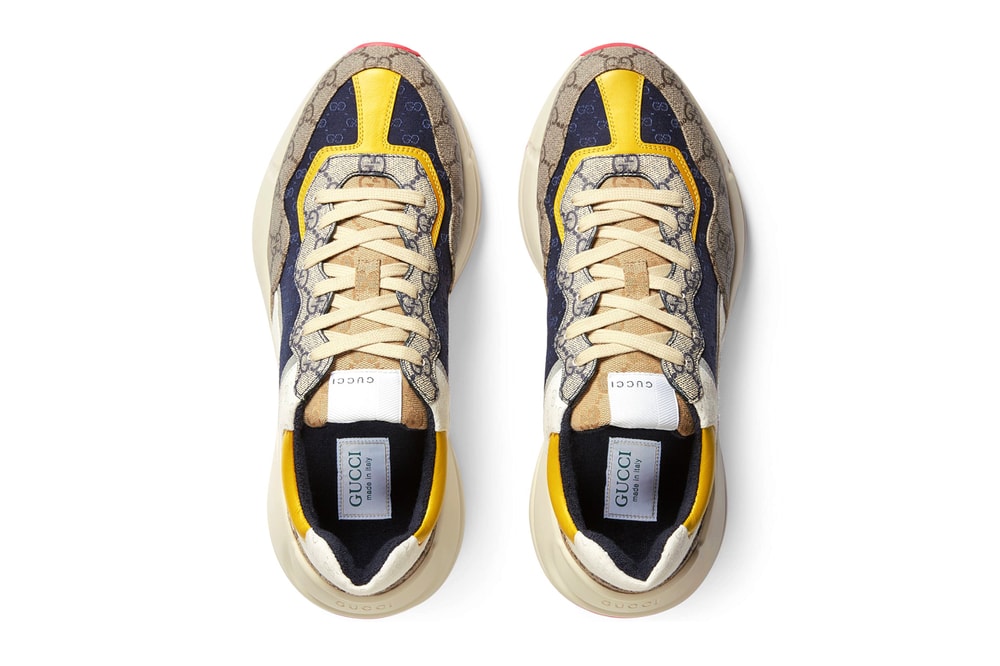 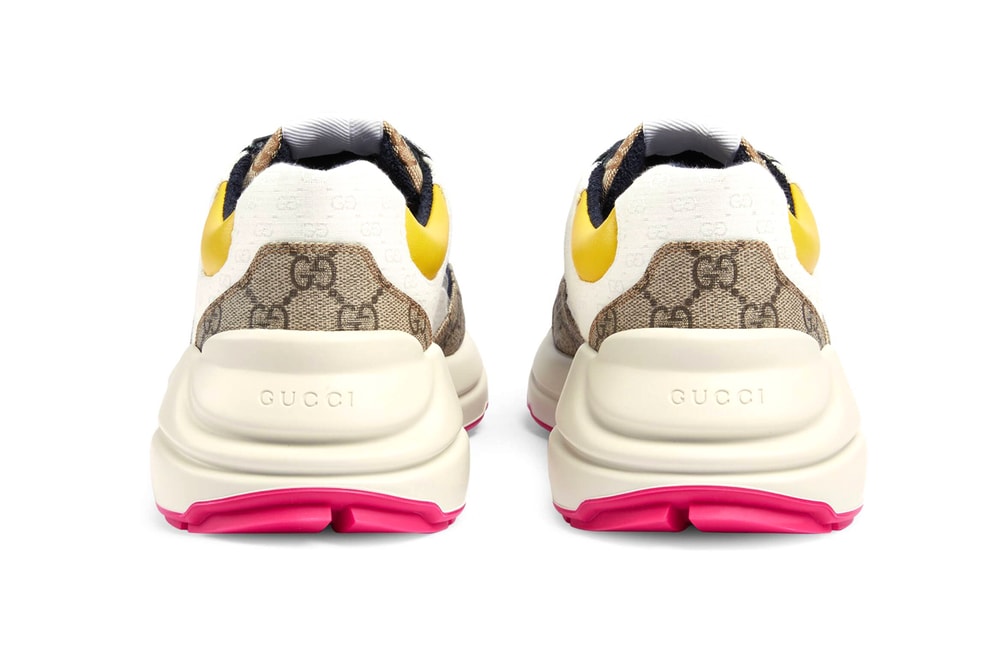 Gucci GG Rhyton
Color N/A
See at Gucci
Description
Big, bold and blocky, Gucci‘s already-audacious Rhyton sneaker is kicking things up a notch with two GG monogram-printed editions. A “Brick Red” style sits squarely in the lap of luxury heritage while a “Beige/Ebony” offers a more summer-ready look, but both are equipped with bold colorblocking — and of course, plenty of branded motifs.

“Brick Red” draws its moniker from the sultry hue used on its quarter panel, but it’s mostly dressed in various shades of beige and brown. A small touch of green is present around the collar as well. These pieces may be divergent in hue, but they’re similar in detail: each is covered in large or small double-G print. The only parts left untouched are the soft grey midfoot trim and toebox overlay, while a bulky brown midsole and outstanding orange outsole complete the look.

“Beige/Ebony” uses just as much print as its predecessor, but applies warmer hues for a more vibrant look. Rich blue, crisp white and invigorating yellow collide on the midfoot, toebox and collar, with classic brown shades and GGs replicating the “Brick Red” on the mudguard, eyestays, tongue and heel. Besides the brown, a common thread is provided by branded hits on the tongue, insoles and midsole’s heel. Final touches arrive by way of a light sail midsole and hot pink outsole.

The Gucci GG Rhyton “Brick Red” and “Beige Ebony” are both available now on the Gucci webstore, retailing for $750 USD.
Read More
Disclaimer: The information in this page is subject to change without any notice. Report