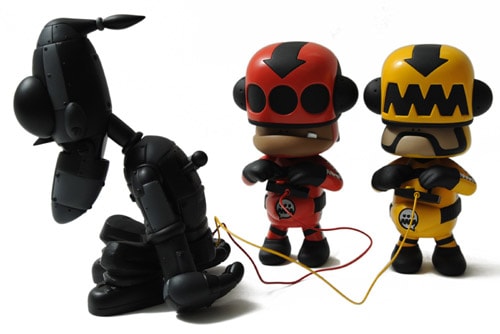 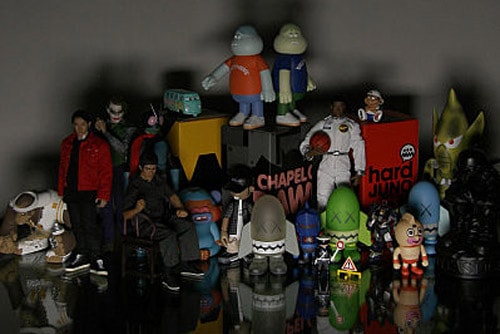 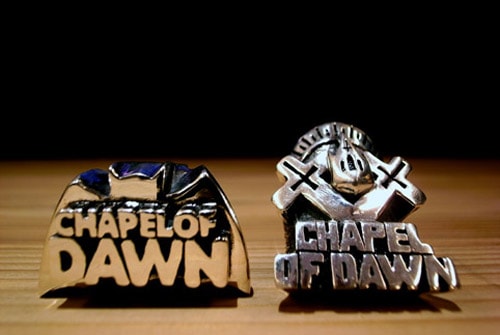 A special follow-up to Amos Toys’ popular Wrestling Elves toys will release later this month. The toys were originally a 3D transformation of album art for Juno Mak’s Chapel of Dawn CD. This special mono colorway of the Wrestling Elves will be available to the Japanese public on December 20th at Amos Toys (Japan). However a further compliment will be available to the UK Webstore and at Hong Kong’s SiLLY THING.
By HB Team/Dec 6, 2007
Dec 6, 2007
0 Comments

For artist Juno Mak’s Chapel of Dawn, this latest release of products on Saturday, November 24th marks over three years of careful preparation and planning. A recent interview provides readers with the insights behind his brand. This first release of clothing includes four different t-shirts, Hotdog, Skull, The Elf and the Bat. The Hot Dog design incorporates Juno’s affection for B movies as it is inspired by Rob Zombie’s House of 1000 Corpses, the Skull print was masterminded by artist Eric Elms and features two tongues protruding from the eye sockets holding a cross and hotdog at each extremity. The Elf print is derived from Chapel of Dawn’s mascot, one half of the Wrestling Elves. The final Bat design includes an Eric Elm designed logo with Juno’s preferred "chubby font" and glitter effect. A further Chapel of Dawn characteristic is slight distressing at the edges of each shirt. The whole Chapel of Dawn experience is further compounded with each t-shirt being packaged with special printed tissue paper and baby blue dust bag. Aside from the release of these t-shirts, a series of tote bags and the James Jarvis designed Wrestling Elves toy (based on the characters seen on the Chapel of Dawn CD cover). Only a few select stores around the world will run this first collection of Chapel of Dawn. They include SiLLY THING (Hong Kong), Supply (Sydney), Someday (Melbourne), Union, Hideout Store (London), Colette (Paris), Firmament (Berlin) and Sold Out. SiLLY THING Unit 8, G/F. Block B 18 Ka Yip Street Chai Wan T: 2898 2199
By HB Team/Nov 23, 2007
Nov 23, 2007
0 Comments

Talented Hong Kong artist Juno Mak began the first chapter of his ongoing lifestyle project Chapel of Dawn earlier this year with the release of his CD. This Saturday, November 24th will mark Chapel of Dawn’s inaugural foray into clothing and accessories. Seen here is a series of totebags which incorporate a series of different inspirations. The cute and practical bags feature two different prints on each side. One side is that of the "Wrestling Elves" designed by James Jarvis while the other side includes a canvas Chapel of Dawn patch. Three different sizes are available, with several design features which should be highlighted. These features include an interior zipped pouch and button snaps for controlling the size of the bag. Prices range from $320 HKD (approximately $41 USD) for the small tote to $620 HKD (approximately $80 USD) for the large tote. Only a few select stores around the world will run this first collection of Chapel of Dawn. They include SiLLY THING (Hong Kong), Supply (Sydney), Someday (Melbourne), Union, Hideout Store (London), Colette (Paris), Firmament (Berlin) and Sold Out. SiLLY THING Unit 8, G/F. Block B 18 Ka Yip Street Chai Wan T: 2898 2199
By HB Team/Nov 22, 2007
Nov 22, 2007
0 Comments