Levi’s® Station to Station, a public art project made possible by Levi’s®, has provided the opportunity for one of Levi’s® lesser known initiatives — the Makers Project — the chance to collaborate with some of America’s smallest independent artisans. On display through an entirely uncovered yurt (a traditional portable dwelling used by nomads), several different artisans have been traveling alongside the tour, each providing a direct and intimate look into their efforts and craft. While this season’s slogan has been #MakeOurMark — the desire to influence the present and future through discovery and collaboration — the ongoing Makers Project has provided a direct manifestation of this theme. We were able to catch up with Levi’s® Makers Project lead Jay Carroll who provided some context to Levi’s® interest in helping out smaller and independent brands.

For more information on Levi’s #MakeOurMark, head over to makeourmark.levi.com/.

Can you introduce yourself and your role at Levi’s®?

Hi my name is Jay Carroll, I do brand concept and the Makers concept for Levi’s® out of San Francisco.

What was the catalyst for starting the Levi’s® Makers Project?

We’ve been doing Makers for two years and we wanted new conversations and stories to tell for our new smaller scale stores. So to differentiate our stores we started working with artisans we met with on our inspiration trips to create unique handcrafted and really beautiful product to sell in our stores.

How important is it for a huge brand like Levi’s® to help with smaller brands?

I think it’s one of the most interesting things about the program is to have a big iconic American brand to work with the small unsung hero.

I think now the whole artisanal movement is really big, why do you think the landscape is relevant and appropriate now?

I think there are a couple things. People are getting back to living a simple life and valuing the handmade. Craft is a dying art form and this is the way that culture is going but we want to celebrate and inspire people.

Do you feel that for Levi’s®, there’s a level of understanding from masses that is different than what the brand also wants to push? For example people who view Levi’s® as a rugged and durable pair of denim, nothing more, nothing less versus a brand that embraces heritage and culture.

The Makers Project does appeal to the customer who is interested in that very coveted and quality product. But there are also those who love the story and concept of say a quilt made from reclaimed materials and those who might love the aesthetic and story behind authentic Navajo fabric.

There’s been a lot of sensitivity around “Navajo” in fashion, how does Levi’s® approach this?

We work as directly as possible. For example the Chimayo fabric is made directly with somebody from the tribe. We’re looking to amplify their work and keep the authenticity. If you look at fashion and say Moroccan textiles, it’s close to home. Rather than taking it and putting it directly on, there needs to be a relevant story. 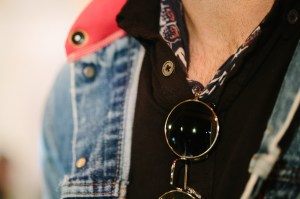 “People are getting back to living a simple life and valuing the handmade. Craft is a dying art form and this is the way that culture is going but we want to celebrate and inspire people.” 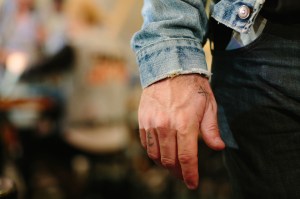 Can the Makers Project extend beyond just fashion?

Yes for sure it’s in the essence of the brand. If you look at Levi’s® whether it’s street style or the hippies in the ‘60s, you can always find a way to reappropriate it.

There’s been a lot of desire for Levi’s® to bring their product and manufacturing back to the United States, what are your thoughts on that?

Levi’s® recently moved a factory from Turkey to San Francisco where we can oversee our own washes and processes and it serves as our Innovation Center. It’s a slow process but a step in the right direction. The Innovation Center, like the Makers Project, has showed Levi’s® intentions of incorporating a greater domestic story into the mix.

What do you want to achieve with the Makers Project and what does the future hold?

What I’m excited about is developing Makers in other countries. We’ve done Japan for a year. I try to find five artisans in Japan and I end up with forty, so it’s strong. I also want to develop it in France and England, and make it a global project with cross-country collaboration.

As a brand, it’s been an interesting four years. This Innovation Center is one of the most exciting things and rather than travel to Turkey to develop I can do it down the street.

“Levi’s ® recently moved a factory from Turkey to San Francisco where we can oversee our own washes and processes and it serves as our Innovation Center. It’s a slow process but a step in the right direction.”

London-based artist Remedee first came to our attention on Ta-ku’s HYPETRAK mix. There, he has been
By Petar Kujundzic/Sep 12, 2013
Sep 12, 2013
0 Comments
Fashion

This fall, Herschel Supply Co. has prepared a refreshed line of wallets and pouches in an array of
By Staff/Sep 12, 2013
Sep 12, 2013
0 Comments
Footwear Fashion

When many people are sick of sifting through administrative gigs on Craigslist, one of the first
By HB Team/Sep 12, 2013
Sep 12, 2013
0 Comments
More ▾